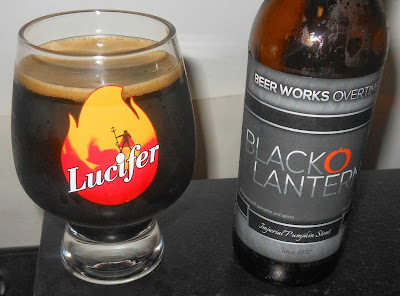 About: "The next release in our small batch, high gravity OT Series is a completely new formulation Black O Lantern – Imperial Pumpkin Stout. This deep, dark, and intensely rich imperial pumpkin stout has flavors of cinnamon, clove, and nutmeg that complement the chocolate and roast character. At 8.5% ABV, this beer finishes surprisingly and dangerously smooth! ... As the name suggests, we work overtime on this series. These limited release, super premium beers highlight our brewers’ creativity and skill. Legends in their own right on tap at Beer Works locations, these brews are finally in bottles! Beers too big and strong for 6-packs, we had to put these higher alcohol styles into 4-packs, now available at your local liquor store and Beer Works locations. These beers are NOT for the faint of heart!"

Thoughts: Poured a solid dense black with a dark chocolatey tan head. There's no color in this one at all, just pure blackness.

This smells like one of those pumpkin coffees only without the awesomeness of shitloads of cinnamon and sugar. Too bad. It does smell like a cold black coffee with raw earthy pumpkin puree though, and it's still kinda nice. There's also a little bit of nutmeg sprinkled in there as well. Not really getting much alcohol in the scent either.

This actually tastes pretty good, though I wish it were more extreme! It's got a good enough foundation, a real heavy natural pumpkin flavor and a decent amount of spice - mostly nutmeg - that tingles. It's not too heavy on the cinnamon, but it's there, though it joins forces with the 40 IBUs for a damper of a combination. Upon belching pumpkin spice comes forward and then some tasty freshly cut grass. Mmmm... There's something weird happening on the back end of this one all of a sudden, like smokey burnt rubber. It's not overly strong or atrocious or anything, but I caught a quick rush of it. I don't think anybody would ever call this beer "sweet" but there's a certain level of sweetness to it. Finishing up the glass now, breathing in heavily and I caught some cigarette ash in there.

Mouthfeel is a lot lighter than expected. The first gulp was pretty watery and surprisingly so considering the stuff looks like thick black sludge. It's also got a foamy quality to it.

Despite the aftertaste of a mouthful of burnt He-Man heads, this one isn't all that bad. It's more interesting than their standard pumpkin ale at least. Even if they're made from most of the same stuff.