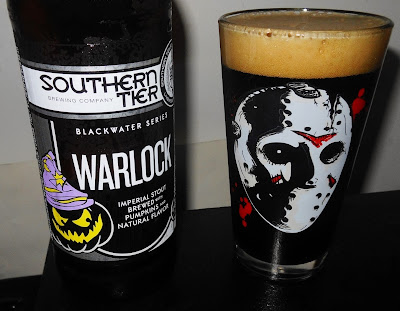 About: "Warlock is brewed to enchant your palate on its own and also to counterpoint our Imperial Ale, Pumking. Make your own black magic by carefully pouring this Imperial Stout into a goblet. Dark and mysterious, the Blackwater Series is serious about high gravity. Reanimate your senses with Warlock’s huge roasted malt character, moderate carbonation and spicy pumpkin pie aroma. Ingredients: 2 Row Pale, Caramel, Black Malt, Munich Malt / Magnum Hops, Sterling Hops / Pureed Pumpkin / Natural Flavor."

Thoughts: Here it is! The Southern Tier Warlock. A much looked forward to beer if there ever was one. Just look at that little fucker on the label there. What a sneaky little wizard. I bet this guy and the Pumking sure throw down some righteously evil parties! Speaking of the label though, I'm not all that fond of ST's newly designed labels with the U shaped dark spot and white lettering with the old art down in the left corner like that. What the hell guys!? At least Warlock could have had a huge label so I could display it side by side with the Pumking bottle I've kept. But I digress, it's about the beer so let's do this. Using my Jason glass for this one, and wishing I had a Pumking Goblet in my possession. Soon. Warlock poured a very dark muddy brown color with a chocolate milk colored head.

The first scent is that remarkable pumpkin pie crust, graham crackers, and pumpkin muffin sweetness! It smells in-fucking-credible let me tell you. It's hard to get much past that scent because that freshly baked pie is just so strong. Black malts drift in and out after a while.

Warlock starts off sweet, full of cinnamon and nutmeg before an absolutely ruthless blast of black malts and strong, earthy and peppery hops hit. It's got a dense bitterness to it that deeply woven in the brew, so when the initial blissful sweetness and spices drown away it's a bit harsh. I've always found black malt to be particularly harsh anyhow. This kind of tastes like a Black IPA mixed with Pumking, which is pretty fucking weird. When I first heard about this beer being made the first thought I got was Choklat and Pumking mixed, but that's not the case here. Warlock is a beast unto itself. It's not too indulgent, but it still tastes great, smells awesome and is loaded with spicy tickling goodness. The main flavor is very peppery cinnamon, that graham cracker pie crust and a hint of black licorice. As the beer warms up and after a few gulps the bitterness calms down, though leaves a bit of the funky on the back of the tongue. It's a bit more herbal tasting than I would have liked but aside from that tastes great.

The mouth feel is lacking a bit for me in the stout area. It's not creamy or all that rich feeling. It's actually pretty watery feeling, leaves no trace of coating on the teeth or the inside of the mouth. The spices don't linger all that much or dry out either. There's just a soft bitterness left behind. Sorry Warlock, but Pumking cannot be dethroned!

Email ThisBlogThis!Share to TwitterShare to FacebookShare to Pinterest
What the... Imperial Stout, Pumpkin Beer, Southern Tier

Nice! Just had this beer this week too. I think we're on the same page review wise...

Grrr... why'd I have to see this post AFTER the liquor stores closed!