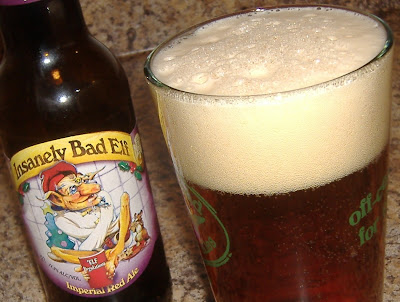 About: They say this beer is "so strong that they'll only serve it in 12 oz bottles." Aside from that I'm having a bit of trouble finding any information on this one.

Thoughts: Poured an incredibly clear cherry amber red with an eggshell head that left all different sized bubbles floating along the top.

Strong alcohol fumes engulf the senses (I love saying that). Hit with cherries, and candy apples. Very sweet with a vinegar backdrop and let... me... remember... like a stale, 3 day old, warm, open can of Pepsi, only still cold. Or like a sticky piece of candy that's stuck to a table and for some reason a week later you stick it in your mouth and it's got a little bit of dirt and dust on it. Or the smell of a half eaten browned apple. How do I know what those things taste like you ask? Quit asking questions. It doesn't necessarily taste good, but it's strong and very sweet at first with every gulp, so at least you can chug it a few times and get it over with.

Well at least it's interesting. But it's got this really stale taste halfway through that doesn't let up with each sip. Perhaps it's the Rye and little big of grassy hops that's making this happen. Too bad. It started off pretty good, but ruins itself rather quickly. This is the second of the Ridgeway brews I've recently had (first being Pickled Santa) and they both kinda remind me of a Natural Ice/Light. Corn... a Cheap Lager pretty much. And hell, I like Natural Ice. I don't give a fuck. I can dig it. But it's cheap and isn't exactly delectable (so they say). I don't like paying three to six bucks for a bottle of beer (no matter what country it comes from) that tastes just as good with a little bit of spice. When in fact, I could simply mix a little bit of nutmeg and cinnamon into my Natural Ice, and throw a cherry in there.

Email ThisBlogThis!Share to TwitterShare to FacebookShare to Pinterest
What the... Christmas Beer, Strong Ale