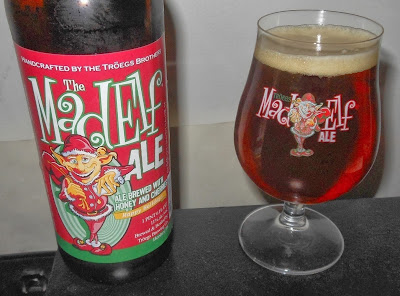 About: "The Mad Elf, a cheerful creation to warm your heart and enlighten your tongue. The combination of Cherries, Honey, and Chocolate Malts delivers gentle fruits and subtle spices. Fermented and aged with a unique yeast, this ruby red beer has significant warming strength that underlies the pleasant character of this intriguing yet delicious Ale. The Mad Elf, a jolly and delicious beer for the Holidays. Malts: Pilsner, Munich, Chocolate / Hops: Saaz, Hallertau / Yeast: Belgian Spicy Yeast / JuJu: Pennsylvania Honey, Sweet and Sour Cherries."

Thoughts: Poured a very rich deep red like cherries or cinnamon. Very cool. There was little to no head, that slowly formed once the brew was poured and faded pretty quickly.

Hit with a pretty sour mix of the hops and Belgian spicy yeast at first, then the sweet cherry flavor rushes in... and then those strong hops and yeast again. Alcohol tingling follows and lingers. I expected this to be sweeter than it is. In fact, I'm a bit turned off by the strange taste... that I can't figure out what it reminds me of. [I decided to check some words on ratebeer.com ("big no-no" to rate beer and read reviews at the same time, but I'm flabbergasted here) and one guy said it tastes like Cherry cough syrup with pennies and band-aids in it. Right when I read that shit, all I could think of was band-aids. That's what the smell is! I guess people who don't get cut a lot might not notice it. I'm not getting cough syrup or medicine at all, and the pennies, well, they're light.]

This sucker dried me out mad quick. I've never got this much of a dry mouth from any booze in this short amount of time. It's medium, goes down quick and that's about it.

Alright, so I poured two of my three bottles in a glass and it was very clear red. Yet I just held up the third bottle and it has floaties all throughout it (didn't check the first two). They've all got the same batch number and are only about fifteen minutes apart. I just poured the third beer into my new TapouT glass and they're gone. It looks just like the other glass. As I hold it up in front of this white blog screen, they're both identical with several rising bubbles throughout (it seems like there's minimal carbonation as there was no head, but bubbles are going crazy rising up - more than I've seen in a lot of other brews). Am I going Mad? Or is this Elf fucking with me!?

I find this incredibly disheartening and feel saddened. I've got two buddies who have been talking to me about going in on that huge ass bottle of this stuff with myself paying half and them covering the rest (me keeping the bottle and the box), and at this point I'm sure it's not going to happen. In fact, one of 'em just said to me earlier today, "Yeah, but wouldn't that suck if we bought it and it tasted like shit?" to which I replied, "There's no fuckin' way. I'll try one out and let you know." Well, it doesn't taste like actual shit. But I'm not growing fond of this one at all as I continue to drink these 36 ounces.

Man, I so wanted this beer to rock. I've had it in the fridge for two or three weeks! Just waiting for the right time. But it's so funky, and I've got this dry tickle in the back of my throat and my tongue is dry and the aftertaste is so bitter. And while the sweet and sour cherries, honey and near-invisible cinnamon is a nice touch, it really doesn't balance out that obscene Saaz hop and yeast taste... or whatever else that is.

It's been warming for a while now as I write this. I just poured both halves of each cups into my mug. The head gets a little thicker this time around, but it's gone just as I finish typing this sentence. I'm having a tough time finishing this. Fuckin' Saaz hops! I can kinda taste what goodness there is in the brew, but I'm searching for it and that is wrong. Bottle reads: 2011-2012 11:57 Batch # 110718. High alcohol. A semi-sweet flavor, that's totally corrupted. I'm feeling pretty buzzed and I guess that's the best thing I can say for this brew. Sadly. 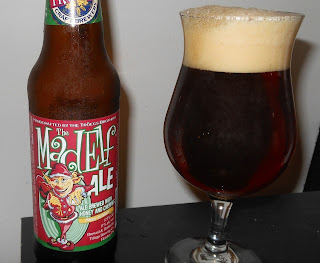 Second Thoughts: Cap let out a loud hiss. Poured a honey color out of the bottle that developed into a ruby red in the glass. Head was super quick to form and left a nice look to the beer in this glass.

Well, it certainly smells like I remember it! Though, back then I didn't really know what the hell was going on in this one. There's tons of Belgian yeast. It's strong... real heavy, man! Sour cherries and a hint of natural honey comb back it up. Smells pretty good. Sour, tart, heavy and quite simply nuts.

Time to dig in! E-gah man. Yup. It's still some harsh ass brew that's for sure. Even now that I've become more accustomed to stuff like this particularly with trying some experimental beers, meads and strong ales, this stuff still made me wince on the first gulp. This ale is majorly boozy, and it comes on strong. The tart cherries blast you with puckering flavor, and the honey (while it's a very nice touch) doesn't hold that sour stuff back. Not that it's really a problem. The flavors of everything here mingle together very well after all. But man, is this stuff intense. Nice malts though.

Mouth is very tingly, and hazy on the back of the tongue.

I was really looking forward to trying this one again after last year's batch completely baffled me. This year's edition  however, reminds me of the exact same thing... which is a good thing, that they're consistent at least. I'm pretty sure that Sazz Hops might not be the culprit here, as I've tried a few more brews with them, but they weren't really strong in any factor. Now that I'm a bit more "educated" I think that it may be the yeast and that mix of cherries. Then again, these fuckers could be drinking the stuff and pissing it back into the bottles for all I know.

The first pint I tried, two years ago, was a bit "off". I came to the conclusion that it was just tainted batch, whether the keg was contaminated of the lines weren't properly cleaned (which I later learned to be a problem at that bar). Last year I had it on tap a few times and enjoyed every pint. I've got 6 more bottles, so I'll let you know if I open any weird ones.

I don't know, but I checked out other reviews online and it seems that they've all had mixed experiences. Some of them seemed awesome and then I'd run across thoughts like mine.

I don't know if it's the batch... if they're inconsistent. It happens, but this seems to be pretty heavy.