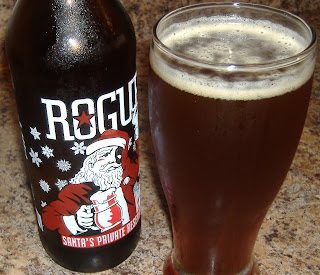 Thoughts:  Poured a auburn red with a light puffy head that resembled yellow snow. As the yellow bubbles fizzled away they looked a bit like the snowflakes just like on the bottle, clumping in a few areas.

Smells of hops. They're sweet. It's like a very cold room where a fire had been extinguished a few hours prior. A short while later I'm getting some pine needles, and a little bit of crusty day old bread.

It's got a very distinctive taste to it. It's sweet and malty, and nutty. The hops only lightly shine through at the end of the gulp, and there's no bitterness at all when you first start drinking. A very well balance of malts and hops here, that all taste pretty damn good. As a normal brew, I'm not disappointed at all. As my first Christmas brew, I'm pretty fuckin' let down. It's nice that the snowflakes glow in the dark and all, but these guys owe me some milk and cookies after this unwrapping of LIES! I actually don't eat milk and cookies. I drink beer and eat meat.

A little heavy with the froth, but there's nothing else holding it back. It's all pretty smooth.

It's an alright IPA, or uh, American Amber Ale, but I was kind of expecting at least a hint of spice. Does it remind me of Christmas? Meh! Not really. It's a pretty good Seasonal brew... for the Season. Finish is citrus, little bitter, piney, and the slightest bit smokey. I wouldn't mind this bottle under my tree if I happened to actually celebrate Christmas, but you won't see me going nuts like N64 kid.

Email ThisBlogThis!Share to TwitterShare to FacebookShare to Pinterest
What the... Christmas Beer, Rogue, Strong Ale