A few new Blu-Rays, and some old DVDs.

So I finally found the Superbit of Bram Stoker's Dracula! In a used book store, brand new and sealed for $4 no less. I've been not-so-much searching for this one for the last few years, every time I walk into a shop I'll browse around the D's in new and used. I started to think I'd never come across the thing, and was beginning to go quite mad as Jayson from GhoulBasement kept talking about the damn thing every six months or so. There it is next to my new, colorful blu-ray edition. I also snagged a new Jean Rolllin film that I haven't seen yet. And of course, thanks to Jayson (once again), ended up cracking and ordered my first new disc online in the last year or so: Synapse's Limited blu-ray of Intruder with the special DVD-R Workprint (#365/500). 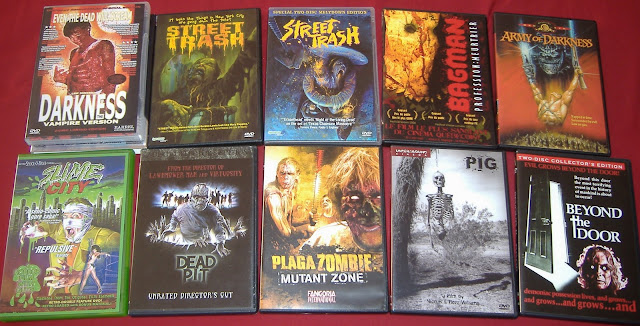 Here's some of my favorite films above: Darkness The Vampire Version 2-Disc with Slipcover and reversible sleeve. Both Street Trash releases (one with Viper stickers and one with a pretty cool documentary on the film). The Region 3 Army of Darkness and a Promotional copy of PIG that I found used with the ever elusive "Why God Permits Evil" book still inside! Also, Best Buy 2-Disc Exclusives of Dead Pit and Beyond the Door. 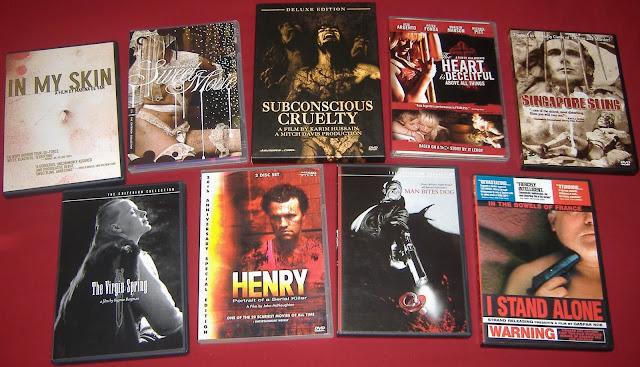 Subconscious Cruelty was my 500th DVD. Still haven't watched it *Lowers head in shame* In My Skin is a great, sexy and disturbing flick. HENRY and Man Bites Dog of course, are both immortal classics. 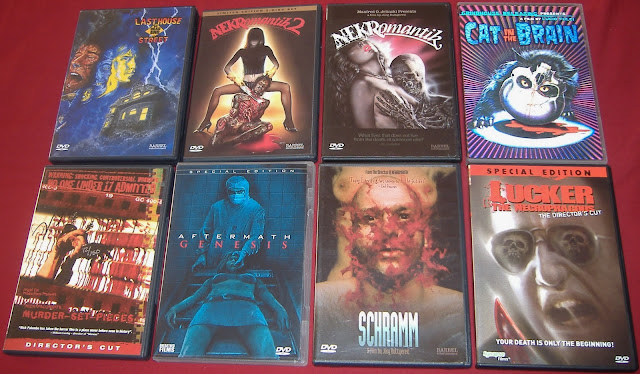 There's my Limited Numbered edition of Murder Set Pieces UNCUT (#72 out of 150). That AFTERMATH is in fact the Red Edition with the old graphic cover. Unearthed sent me both covers for some reason which I'm quite glad as I do love the new artwork. That Cat in the Brain disc has the Lenticular cover (hard to tell from the photo). And of course, there's the 2-Disc of Last House on Dead End Street! 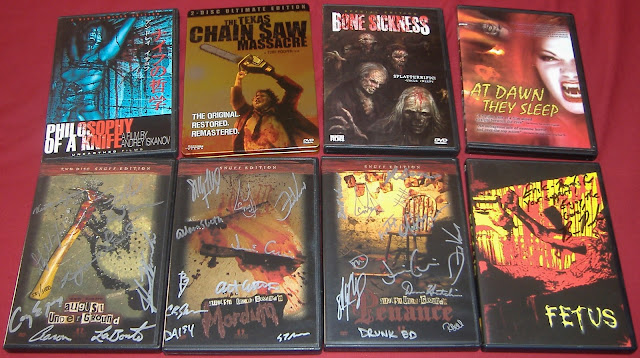 And finally in this batch of photos there's my Signed version of Brian Paulin's FETUS. And all the Signed Snuff Editions of the August Underground films: August Underground (#581/1000), Mordum (#513/1000) and Penance (#627/1000). I better get to watching Philosophy of a Knife too.
Don't forget to dust off your dirty shelves!
Laid to Unrest by DrunkethWizerd

Email ThisBlogThis!Share to TwitterShare to FacebookShare to Pinterest
What the... Collection, Horror, Stuff