About: "Carefully matured for 71 days prior to bottling. This special bottling of Innis and Gunn has been matured in oak barrels which had previously been used to mature 18 year old single malt Scotch Whiskey from the famed Highlands region of Scotland. The result of this unique maturation is a smooth, complex and warming beer with a classic Highland malt character." 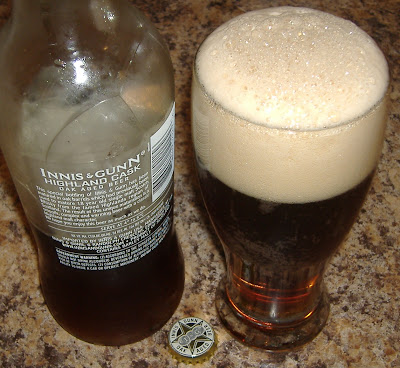 Thoughts: I read that this wasn't due to hit US store shelves until January 2012. What a pleasant surprise to find it on one of my mini road trips ("Oh hey, a liquor store! I better go investigate.") Innis and Gunn oak aged a Limited Edition one-time beer a year or two ago in Whiskey barrels. I guess it was such a big hit that they decided to make it year round. That's if I got my information correct.

It pours a deep, translucent amber-orange with shades of light red, and a white fizzy head.

Whew! This brew smells damn strong! Like... drunk bastard wandering the streets about to get arrested strong. That Malt Scotch Whiskey is overpowering. It smells as if it's 70% Malt Scotch Whiskey, 25% brew and 5% oak barrel. After smelling it for a while, it seems to blend a little more, but not much.

Well isn't that something. It tastes absolutely wonderful! Very sweet, like cherries. Backdrop of caramel and black pepper. Vanilla and grilled short-rib barbeque smoke. Buttery biscuits. Lightly reminiscent of butterscotch candy, and (not) cinnamon. There's a bit of a overripe banana tone about it later on, but it's way in the background. As is the oak, which that smokey taste ushers in once it warms up a bit.

Spicy and tingling on the tongue, smooth going down with a candy like aura once it's inside ya. Little bit of sourdough bread and butter in the aftertaste. Mouth feel is a bit on the thin side once it warms.

I enjoyed their Rum Cask more than this. Though I did go through a short Whiskey stage, my Rum stage was far more developed and enjoyed. The strong scent of this could possibly frighten some away, and I hope it does so there's more for me! It's not really bitter at all, but rather a (very) sweet and sour. Flavors and aromas are in full force here. It may not be the deepest beer overall (complexity is still nice), but it certainly is a powerhouse.

Email ThisBlogThis!Share to TwitterShare to FacebookShare to Pinterest
What the... Barrel Aged, British Beer, Innis and Gunn, Strong Ale