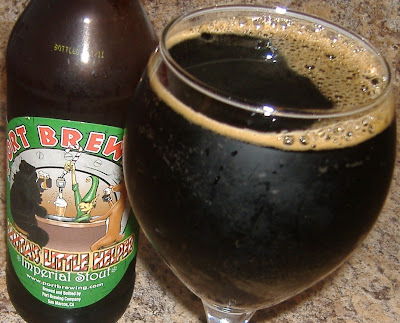 Thoughts: Poured a poured a pitch black stocking-coal with remnants of burgundy around the edges and a no-inch half of a tan head that faded quickly into obscurity.

Roasty, with a slight bit of tang. Bit of a smokey, semi-sour alcohol tinge a short while later. Ends up pretty grassy tasting about halfway through. Still, it's pretty damn sweet. Lots of sugar in this coffee. There's those chocolate covered alcoholic cherry candies again - no goo this time around. Spices blast with each sip once it warms.

Finishes rather smoothly. Easily drinkable, and a bit on the light side.

Well for a 10.0% I'd say that the alcohol is quite well hidden. Aside from a hazy, cloudy feeling in the mouth this brew goes down like water. It's strange to feel so much of a hop presence in an Imperial Stout, but it's pretty interesting. If you've been drowning in super malty stouts lately, then this may make a nice change. As for the festive season? I don't really see how this Stout reminds me of Christmas. Unless Santa is a black shadow like Noob Saibot in Mortal Kombat. Don't know what that has to do with Christmas though either...

Email ThisBlogThis!Share to TwitterShare to FacebookShare to Pinterest
What the... Christmas Beer, Imperial Stout