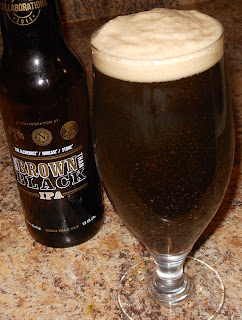 About: "Stone Brewing Co. is proud to announce its fifth and final 2011 collaboration beer. Proceeds from the sale of this beer will be donated to the Waterbury Good Neighbor Fund, dedicated to rebuilding Waterbury, Vermont – hometown of The Alchemist Pub and Brewery. Malts: Maris Otter Pale, Light Munich, Carafa III Special Dark, and CaraHelles / Hops: Super Galena hop extract for bittering, Nelson Sauvin and Delta for flavor,  dry-hopped with a blend of Citra and Galaxy."

Thoughts: Popped the cap with a loud fizzy hiss and a ton of smoke poured out. The creamy light tan head was massive at first and it took a while to get all of the beer into this glass. Color of the pour was sort of a dark raspberry brown that settled into a slightly darker version of itself. TONS of sediment drift in dark space.

This smells very boisterous. There's a strong citrus hoppiness, and it's slightly piney as well. The scent is strong, cold and absolutely delightful.

The taste is exactly like the smell. There's a little bit of more of a roasted chocolate-like malt overlay on the hops, especially as it warms. It's all a little bit tangy, with a slightly sour after effect. There's a bit of musk. Aside from that it's not really overwhelming in any way, nor is it tame. It's an interesting mix between a brown ale and black IPA, but taste-wise I'm going to have to say that it's about average for a night's brew. A great collaboration and representation of the style, nonetheless.

The feel is a little bit frothy, but everything flows smoothly and is crisp.

Many brown ales and just a few black IPA's have been tough for me to get into so just take my rating of average with a grain of salt. It could very well be slightly above average compared to a lot of other similar beers. I'm still looking at two other collabs they've done that are on the shelf now. I'm not thrilled this time around... but I'm not disappointed either.

I tried this beer a couple of times and thought it was just OK too. Stone's Sublimely Self-Righteous Ale is a much better example of a similar style.