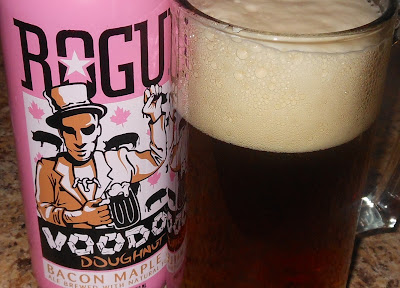 Thoughts: Voodoo Doughnut poured a grainy burnt amber / slightly orange color with a massive bubbly white head atop.
Oh wow! This smells just like maple syrup. It's insane. It's really hard to get anything else aside from this syrup as it smells just disgustingly strong. The applewood bacon follows in the background, but it's not the smell of cooked bacon really, but instead the smell of it right when you cut open a package.
The taste is absolutely nothing like the smell at all. It's very, very malty with a ton of smokey wood flavor. It's a little doughy too. Mainly though, what I'm getting is heavy smoke, wood and some rather unexciting malt flows. The maple and bacon make way for a decent aftertaste that's long lasting and isn't bad at all... but that smoke-bomb really clouds up the mouth. The warmer it get and the more you drink it, the more bitter it becomes. Agonizingly bitter even, for something that smells so sweet.
Mouth feel is extremely thin. It's weird after smelling such heavy syrup that it was become a light and fluffy watery affair.
The bacon is hidden pretty well, but once you taste the beer and then smell and taste it again at the same time you get a hint of it. It's in the background, just lingering around. I've never had a maple bacon doughnut from Voodoo, but I did see them featured in a show on the travel channel and the place looks interesting to say the least. Personally, I don't eat doughnuts. I've never been a pastry guy. When I was a kid I hated cake and never wanted it at my birthdays (in fact, I destroyed quite a few of them)... I always liked ice cream way more! To me, doughnuts are just bland as fuck. And this beer tastes pretty damn bland too. It's a shame too. When I first smelt this I was so excited, but those scents are nearly nowhere to be found in the taste and the beer just comes off as pretty boring.
Laid to Unrest by DrunkethWizerd

Email ThisBlogThis!Share to TwitterShare to FacebookShare to Pinterest
What the... Beer, Brown Ale, Rogue, Smoked Beer

When I saw the name of this beer, I got excited. I've sen Voodoo Doughnuts on TV, but have never been out to Portland to try them out. The flavors in this beer sound awesome, in fact similar to something I was thinking about brewing, but it's pretty disappointing to read your review. I may still give it a shot if I come across a bottle.

I was mad excited too when I saw it on the shelf. Laid down thirteen dollars for it without a second thought. I love bacon and am (for some reason unbeknownst to myself) seeking out a maple syrup brew that fulfills its obligation of tasting awesome as fuck.

The last time I had maple syrup was probably twenty years ago... when I was ten years old. So I don't know why I'm looking for a beer that represents this aspect well. I must be bored with "life".

I know what you mean. I don't drink coffee, yet I find myself seeking out and drinking coffee flavored beers. Life is weird.

Brooklyn Brewery came out with a maple porter a while back, but it's only available on tap as far as I know. I haven't had the opportunity to try it yet, but plan to if I ever come across it. I can't think of may other maple beers at the moment, besides Life & Limb.