About: "Our fruit beer for hopheads! Aprihop is an American IPA brewed with Pilsner and Crystal malts. It's massively hopped - in the continuous fashion, of course! - and the flavor is complemented by the addition of apricots. After fermentation, the beer is dry hopped with irresponsible amounts of Amarillo hops. The beer has a hoppy aroma, with the apricots playing a supporting role. The flavor is rich with late hop flavors, and its bitterness is tempered by just the right amount of malt sweetness and fruity undertones from the apricots. This is one of our most popular seasonal beers and we've been brewing it each spring for quite a while now." 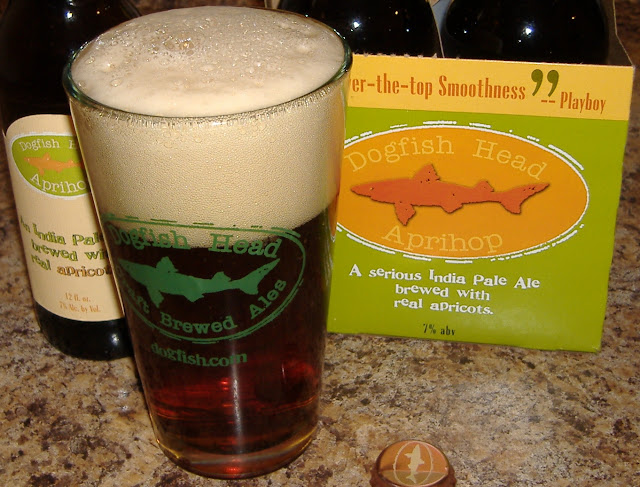 Thoughts: Aprihop poured a really beautiful deep orange with a slightly off-white head that was absolutely massive and never died down. There's next to no carbonation bubbles rising, only about five or six, and the beer is super transparent... for being so colorful. After a short while the head turned to fluff.

The smell of this beer is straight up amazing!! I think I'm in lust. It reminds me of some of the best IPAs I've ever had and to me that is telling me that this will be a quality brew. The hops are pretty massive here, both piney and very peppery. There's a cold frost to it and the apricots add to the scent with lingering fruitiness.

Taste is off the charts. It's a little bitter with those strong hops, but that sweetness and apricot taste just flows in and out throughout the hops, mingling and intertwined. Let it warm for more of that apricot flavor. After swallowing, that fresh apricot hits and it is just cool as shit, mister. It's blended very well. Not bittersweet, but both and at different times, bitter and sweet. Real cool. The sweet, soothing and beautifully relaxed aftertaste of that flavor stays for a long time and it's great.

The mouth feel on this beer is incredibly smooth. There's a slight bit of fluffiness from the bubbles and a zing on the tongue, but aside from that it's smooth as hell. I haven't really made a list of favorite to least favorite Dogfish Head brews, but if I do this will be somewhere near the top of that list. This is my first time trying this beer and I am supremely impressed.

This is a surprisingly great beer, I think because they choose to brew an IPA with apricot. The hops and apricot go together so beautifully. I've had other apricot beers of different styes, and they don't stand up to Aprihop at all. I'm not a huge fan of fruit beers, but I do like this one.