About: "Oak Aged Unearthly is a manifestation of the brewer’s craft; skillfully balancing art and the forces of nature to produce a divine liquid, this brew is aged on oak. Pour a taste into a fluted glass. Smell the enchanting aromas of hops as your first sip divulges this beer's fervent soul. To underestimate Oak Aged Unearthly is to trifle with the mysteries of the universe, so please consume wisely. Malts: 2-row Pale, Cara-Pils, Red Wheat. Kettle Hops: Chinook and Cascade. Hop Back: Styrian Golding. Dry hopped: Cascade, Centenial and Chinook." 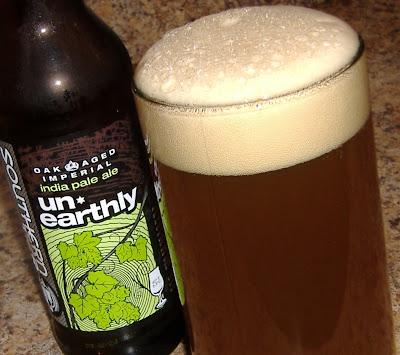 Thoughts: Having already tried Southern Tier's Gemini, Hoppe and Un-Earthly, you couldn't possibly imagine how excited I was when I found this on the shelf. I almost passed it up thinking it was the original, but something about it stood out (a little more darkness around the top of the label perhaps)... and then that OAK AGED caught my eye!

Poured a hazy orange red with a very slow to form one-finger white head full of all different sized bubbles. Carbonation bubbles are rising from all over the place.

The smell on this one is fantastic. I've had an absolutely wretched, fucked up day and now, smelling this after a cold shower, really washes it all away. It's the smell that you want in your nose forever. I close my eyes and and drift into another world.

I didn't get much oak in the scent, but man, when this beer filled my mouth there it was and it was intense. Fucking beautiful! Not only does it take Un-Earthly to a new level, but a different level as well... and it's one where you wouldn't want to choose one version over the other, but rather enjoy both as they are. The incredible tasting hops are around at the end of the swallow, but when it's in the mouth, it's oak, vanilla and candy. This really made my day.

It's a little heavier than the original, slightly thicker than I remember, but still pretty damn smooth.

Un-Earthly is a slightly malty IPA to begin with, but when it's Oak Aged, the oak just kind of clings to the malts and gives it a whole new feel. All of the tastes here are individual and experienced in stages. They all appear at different moments when you drink this beer, and it's really interesting and fun. Half-way through the beer now and... done. Sorry, lost my train of thought. Enjoyed it too much. Thinking about buying another bottle. Also craving a Pumking at the moment. Allz Hailz to Southern Tier! That's my final thought. 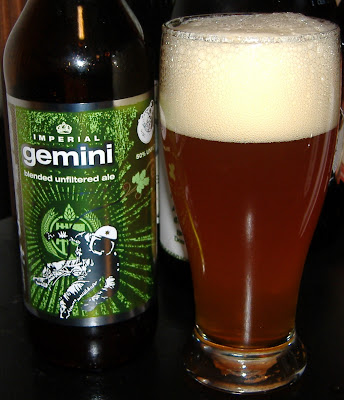 About: This is a mix of two of Southern Tier's Imperial Ales - Unearthly IPA and Hoppe Extra Pale Ale. "Malts: 2-Row Pale malt, Malted White Wheat, Cara-Pils malt, Red Wheat / Kettle Hops: Columbus, Chinook, Cascade; Aroma Hops: Amarillo; Hop Back: Styrian Goldings; Dry Hops: Amarillo, Cascade, Centenial, Chinook and Columbus. High in the winter sky, two parallel stick figures are visible and known as “the twins,” or the constellation Gemini. The astronauts of the 1960s flew as teams of two in a program named after the celestial pairing. At Southern Tier, we have our own fraternal twins, Hoppe and Unearthly. Blended together and placed in  this vessel, the mission of our Gemini is to travel high and take passengers on a journey far into the heavens."

Thoughts: Poured a really haze filled orange amber shade with an opaque white head that fiercly grew and slowly settled into a super thick layer of froth that resembled whipped cream. Never seen a head this thick before, it's crazy. Medium carbonation.

Nose is hops, hops and more hops. Spicy notes. Some fruity notes as well. The spicy gets you first but the tang of the fruity notes creep inside the nostrils and tickle ya. This smells pretty awesome. I'm getting like a peppery light cinnamon-type scent with a sprinkle of orange and lemon. Overall it smells really sweet like a sugary lemon meringue or key lime pie.

Spicy kick intially that slowly levels off and makes way from some of the sweet and tangy. For a hop bomb of an unfiltered ale this baby sure is damn sweet! Flavorful. Not overly sweet, mind you, there is a bit of citrus to tweak the tongue, but this brew is liquid candy in the purest form! This is some brilliant fuckin' shit, pardon my engrish. It's strong, tasty and beautiful. The wheat and malt are at low levels but with the amount of hops here they are surely balancing things out a bit. As it warms the malts start coming through quite a bit more, and I don't mind because it's changing flavor a little and giving a whole new dimension to my dementia.

Mouth feel? I hadn't even noticed it up until the point I had to write about it. I was too engrossed in the scents and tastes to even think that far ahead. Every single time I pick the glass up I smell it once again and it's so good, and then I taste it and I'm drowning in the greatness. I guess I'll try for the mouth though: Little heavy, medium-thick swallow, slow lingering syrup on the tongue that fades just about the time the aftertaste starts and another gulp is needed... re-setting the whole process.

What is it about Southern Tier that makes me love their brew so much? I guess they're just born with it! The head of this beer is still there. Not only is it still there but it's still massive, thick and looks like I just sprayed whipped cream onto my beer. As I swirl it around the head stays to itself. Love it. Finishes with a peppery aftertaste and some bitter citrus zest. I've never seen Hoppe on the shelves, but I've seen Unearthly and it's on my lists of must try's. I wonder how it will compare to this?
Laid to Unrest by DrunkethWizerd