About: "Blend two Dogfish Head favorites, add maple syrup and carbonate the mixture naturally. What do you get? 75 Minute IPA.The carbon dioxide trapped during bottle conditioning gives 75 Minute IPA a soft and velvety mouthfeel. Dry-hopped with whole-leaf Cascades, this complex IPA has been known to inspire pilgrimages to our brewpub. Now were sharing this animated blend of 60 Minute and 90 Minute with the rest of our fans, 750 milliliters at a time." 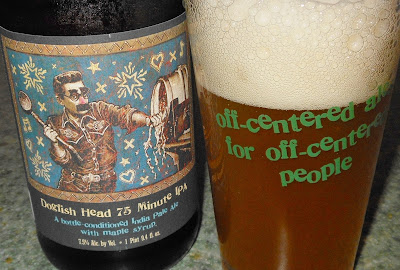 Thoughts: Popped the top and smoke came screaming out! 75 Minute poured a pretty deep hued yet lighter shade of yellow that formed into a cloudy and super hazy orange color.The head on this thing was massive and built up very quickly.

Smells super fresh. Not as hop dominated as I had expected, but rather a really sweet balance of candied biscuit and citrus that overall just smells delicious. The maple syrup is of course hard to find unless you really breathe it in.

Taste is very rich. There's this great tasting flow of citrusy and utterly sweet hops that blast away and once swallowed, when they fall back, there's this really crazy creeping of subtle maple syrup that ushers in. It's so good. This beer is a candy feast of greatness.

The maple syrup really isn't pronounced all too much (will any Brewery ever really step up to this?!) It's actually blended so extremely well that it and the beer just become this new taste all together.

Once it starts warming there's a bit of a peppery sensation. Mouth is a bit heavy. It's smooth, but at the same time there's a ton of carbonation in this.

Drank this one pretty fast. This is a really awesome and sweet beer. I enjoyed every single aspect of it, and think it's pretty kickass. This liquid candy comes recommended highly. I really should have bought two of these, as they've all disappeared from the shelves.

I first tried this when it was called "Johnny Cask" and only available on cask. It was awesome, but not easy to come by. When I heard it was released in bottles, I made a trip to Eataly in NYC hoping to get it as my local beer shop didn't have it. I bought 2 for $13 each, only to find it at the beer store near me a week later for $9. I wasn't too bummed, because it was so good.

Shortly after getting 75min, my brother and I ran the DFH IPA gauntlet. We drank 60min - 75min - 90 min - 120 min in one session. I think the favorite was 75min because of it's wonderful flavor and easy drinking. I am partial to 120min actually, but since I've had it on tap it's not the same out of a bottle. I really hope they release 75min in 12oz 6 packs, because this is one I can stick with all night long.

BTW, your post inspired me to drink my last bottle of 75min last night. I had it with some spicy Buffalo chicken... delicious!