About: "Double Simcoe IPA is our incredible reward for 'Hopheads' seeking the intense hop flavor in a Double IPA, without the harshness. It is brewed utilizing only the Simcoe hop variety. This hybrid hop, developed and trademarked by Select Botanicals Group, LLC in the year 2000, was created for its high alpha acid content, maximum aromatic oils, and low harshness levels so that brewers can really put a lot of ‘em in a beer and not create an overly harsh taste." 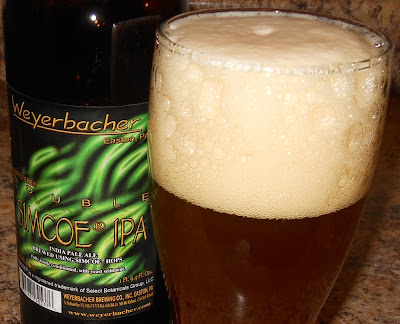 Thoughts: Popped the cork and this golden hued brew formed into an almost burgundy or ruby-like color in the glass. The light caramel colored head built as a two finger but once I filled the glass it suddenly began to expand to the size of a fist. Nuts. I haven't poured all of the bottle in yet, and right now this beer is a murky haze. There's no seeing through this fog.

Smells a bit like Belgian yeast. Hmm... I'm getting tons of fruity hops that almost smell a little bit like funky mango or uh, some kind of sour fruit like guava. Once it warms it gets more of a caramel and grapefruit mix, and a lot more floral than fruity.

Alright, got hit with a wild haze of booze there. Well, I guess the mixture of these Simcoe hops and Belgian yeast are a bit of an acquired taste. This tastes a little bit like pineapple, but not nearly as sweet. It's sweet and sour at the same time actually. There's a decent flow of malt that comes in as backup, but most of the taste appears to be that strong yeast. There's a lot of dank citrus coating the inside of my mouth. There's a mix of pine and grass in the aftertaste which is pretty hard to differentiate, so I'll just say both.

Mouth feel is ultra frothy. This is a froth bomb of burptitude! It's a bit numbing after a while.

Poured the second half of the bottle into the empty glass and around the end I witnessed a huge bundle of stuff plop out. The brew is a lot darker, grainier and even murkier than before. It appears to be more of a dark reddish-brown now. Smell is the same, and the taste is still just as pungent. It seems to be a little bit more pronounced through, and full flavored... more rounded. It could just be my imagination, but I started out not really liking this beer all too much. For some reason though, I'm enjoying the second glass a lot more. Not a spectacular tasting brew in my opinion, but at least it got better instead of worse. The second glass was cold by the way, I had the open bottle back in the fridge.

Email ThisBlogThis!Share to TwitterShare to FacebookShare to Pinterest
What the... Beer, Double IPA, Weyerbacher