About: "Saint of Circumstance Sour Mash Whiskey Barrel Aged IPA married the grassy hop notes of this unique India Pale Ale with the richness of whiskey and oak, creating an enticing brew of exceptional character. The use of a mystery hop means this beer can never be duplicated. Aged 8 months in barrels from a well known Tennessee distillery, we at Berkshire Brewing Company offer up this special brew as a treat to you, our loyal customers. Ad Chris and Gary are fond of saying "Its all about the beer, but the beer is nothing without the people". We hope you enjoy it, and thank you for your support." 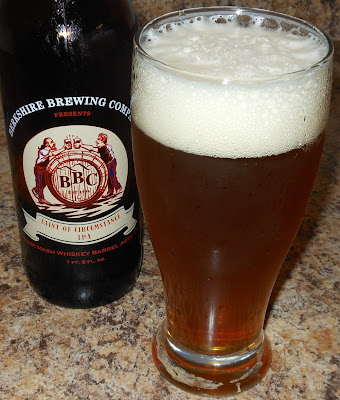 Thoughts: Poured a darker amber with a shade of red that settled into a orange hued, near golden haze. The eggshell white head was slow to form and lasted for a short while before frothing out into clusters.

The scent is blisteringly strong and agonizingly beautiful! Very strong splinters of wood from those sour mash whiskey barrels pierce my nose. I'm not really getting much of an IPA scent on this one at all, and I'm wondering if they even completely emptied the barrels before filling it with their beer. Either way, it smells delightful, but if you don't like the smell or taste of any sort of whiskey then you'll positively hate this!

E-Gah... whoo-boy! Straight up sour mash whiskey slap to the face. Any resemblance to an IPA seems to be completely lost in this one. I'm getting a lot of wood around the end and after the swallow once the air hits me again. Then I sucked the froth out of my mustache and cringed as the sour remnants struck their chord once more. Nicely done, Berkshire. They say they use a mystery hop in this so it'll never be duplicated, but I'll be damned if I can't really find much of it here. What I am getting is citrus and light grass, and it's very sour but not like lemons or limes or grapefruit at all, more like orange... but it's funky sour orange like I've never tasted before. Not only is this IPA domniated by the aging process here, but it's really seemingly malt heavy as well. I'm getting a lot of biscuit and a little bit of caramel. The hops, well, they start to come through the more you drink it. But it's an undertone to it all, and that's mainly how citrus and grass likes to hang around on the back of the tongue and taunt.

The only other beer that I've had that's remotely comparable to this is Innis and Gunn's Whiskey barrel , and even then, they're not even near similar.

This tart as all fuck brew doesn't exactly stand out as any sort of IPA, but as a whiskey aged brew it is decent enough, though totally sour! I can only imagine what it would have tasted like if it were a true IPA with a bit of these flavors. The sour overwhelms everything here. Meh, I finished it.

I like barrel aged beers a lot, but it's disappointing when they're not well balanced. I've had some good barrel aged IPAs, but they've all been fairly high ABV%. 5.7% is surprisingly low for a barrel aged brew.