About: "Urkontinent is a Belgian-style dubbel that begins with Pilsner, Munich and Chocolate malts and Belgian Dark Candi syrup. Then we add unique ingredients from around the world: Wattleseed from Australia imparts chocolate, coffee and hazelnut notes to the beer. Toasted amaranth from South America gives it an earthy, grainy flavor and a little additional roast flavor. Green rooibos from Africa contributes a floral aroma and slight astringency. Myrica gale from Europe supplements the bitterness from minimal hopping. Hiveplex Honey from California adds a subtle sweetness while maintaining the dry finish."

Thoughts: This beer poured a dark, dark ruby red with brownish tones and a shadowy tan head. It would be a little transparent if it were light enough to see through, but it ain't. 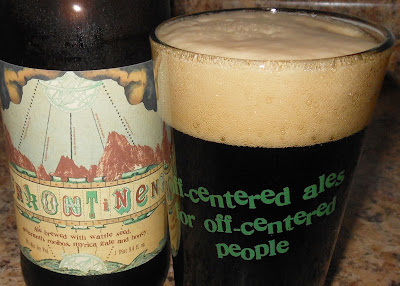 Well, I'm not too familiar with most of the ingredients in this, so I can't exactly tell you if this beer reeks of funky rooibos, but I'll try. Smells kinda like a coffee flavored brandy. But not a cheap-ass nasty one. A semi-sweet and gentler kind of brandy. Real quality stuff. There's also some mellow herbal notes, and a roasted nutty undertone.

Taste is very malty at first with a moderate sting of booze. It's woodsy, chocolatey and sweet at the same time... kind of like those alcohol filled chocolate covered cherries. I get a hint of smoke after the swallow, which starts out as just a hint but grows after each gulp. It's a little sweet, but at the same time there's a low level tartness that's to be reckoned with. It's a bit too mild-chocolatey for my tastes though (I like my chocolate beer to be Choklat! - and don't really tend to like any other chocolate notes in beers). I really wish this were a lot sweeter, but as it stands, the taste is quite pleasant and it's easily drinkable.

Mouth is pretty fizzy and frothy. Finish is dry and wine like.

This is a good representation of a hybrid Dubbel / Belgian dark ale, but it's not overly exciting. Maybe it's a little too close to a porter for me. And a little overpriced too, but hey, it's DFH we're talking about. Get used to it, or just do what I do, buy one bottle and be done with it (unless it's just that good). The taste of this kind of makes me think of it as Monk's Blood Light. While the Blood is full, rich and flavorful, this is like a really toned down version of it - lacking the spice and sweetness, and subtituting in that mild bitter chocolate which brings about a "meh" feeling inside of me. No unpleasantries of any nature, yet not outstanding in any way.