Sitting at the pub today when I heard the news. Randy Savage, the most intense motherfucker in all wrestling history - and my favorite throughout my youth - has died. Heart attack / Car crash combination so it seems. The man is and always will be a true classic, never topped in terms of entertainment value, and undoubtedly to the extreme! Oh yeah! 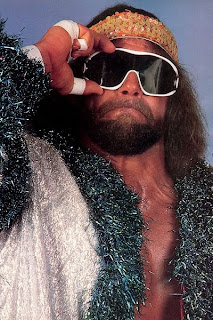 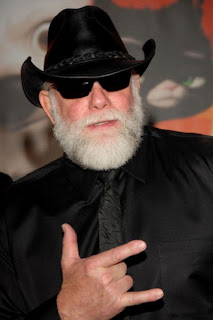 Email ThisBlogThis!Share to TwitterShare to FacebookShare to Pinterest
What the... RIP, Wrestling

I've got something to say! I went to WalMart today... 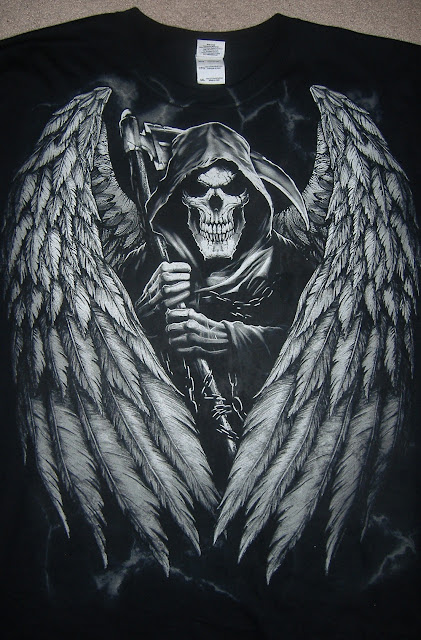 It was a sad, sad day when I officially retired my Re-Animator shirt last Friday. It's the lightest, most comfortable shirt that I own (something that really helps in a hot as all fuck work building), but it just developed too many snag holes from nightmarish machinery. It is now in pajama land... green needle and all. So I headed out to WalMart to check out their bullshit wall of trendy pop-culture shirts. There's Elmo, Captain Crunch, and  Stewie... oh wonderful... then suddenly, what's this!? I found this beautiful sick gem hiding in the bottom corner and it's like Fuck to teh Yeah. For a quote-unquote "generic" and/or perhaps "ripoff" shirt as some may say, it's damn near an all-over print, looks cool as shit mister and hell, it was only $7. So thanks WalMart and unnamed artist of grim awesomeness, for the representation of death, which I like to keep with me and express always.

I also bought three packs of of Jack Link's Jalapeno Carne Seca and some black socks.

Email ThisBlogThis!Share to TwitterShare to FacebookShare to Pinterest
What the... Clothes, Metal, Skulls, Wal Mart

So Porkhead just posted his off the wall horror list of probable drunkenness.

1. Your first horror movie: My older sister was obsessed with horror films. She had about a hundred VHS tapes in her collection, and this was back in 1989. All the Fridays, all the NoES and various other sick and rather mainstream gems. She was the first to give me a glimpse of my future hero, Freddy Krueger; but it was in fact (as far as I can remember) my Mum and Pop that sat me down between them under a blanket on the couch with some popcorn and let me watch Friday The 13'th part 3. In fact, my rents and I had all sorts of movie nights back on our channels 2-12, and back then they really promoted that shit - commercials and all (Friday the 13'th Part 3 Will Return After These Messages!). That's how I first got to see Blood Beach, Jaws, and other various beach related horrors. WTF! And even though I grew up on the beach, none of that shit did deter me from the ocean. The ocean itself is scary enough with the fuckin' rocks and undertows and floating condoms. Supposedly, according to my mum, I turned into a little prankster. One time when we were all watching Critters in the dark, I got up to "go to the kitchen for more snacks", only to come back with one of those fluffy-head hand-dusters. I snuck up behind the couch, made weird noises, petted mum's face with it and giggled as she screamed her ass off.

3. Favourite classic horror movie: They're all classics to me. Well... except the one's that suck.

5. Favorite horror remake: A Nightmare On Elm Street. Half of it may have sucked, but the other half touched me so close to the wang.

6. Favorite vampire movie: Tie: Interview With A Vampire and Bram Stoker's Dracula. I would have said Twilight but these two are far more romantic and they have first movie endings.

7. A horror movie you think no-one has seen: Seriously? I guess you could go watch The Ugly or uh... Santa Claws, or The Invisible Maniac.

9. Favourite supernatural horror: I'm the ghost with the most babe!

10. Horror movie everyone loves but you don't: The Blair Witch Project.

16. Horror film with a great soundtrack: Demons! Fuck yeah! HENRY. Last House On The Left. Oh, and the original NoES.

21. Best horror franchise: Best? They're all fucked up. Just like a real family.

22. Best death scene: That hot piece of ass blonde chick from JaXon getting her sweet titties almost exposed before going face first into the ice cooler and then that face cracking open like a cold brew!

24. Horror movie character that describes you: I once stuffed a tube of lipstick inside of my nipple and it was... gone!

26. Horror movie for a chicken: Poultrygeist?

27. Horror movie that you would like to see remade: The Deadly Spawn. Starring pretty much all of anyone in the media that's annoying the fuck out of the us. Not going to name names as naming names makes them stronger, but you know who I'm talking about here.


Bitches love getting watched while they sleep!"

Email ThisBlogThis!Share to TwitterShare to FacebookShare to Pinterest
What the... Awards, Bloggers, Interviews
Newer Posts Older Posts Home
Subscribe to: Posts (Atom)
My words are my own and as of posted from their creation forward I hereby claim originality to them. Pictures may prove to be promotional items and are the sole possessions of their respectful owners and/or companies. I do not sell, nor do I buy. I only rent, so therefore, nothing I own is truly mine.