Cambridge Brewing The Audacity of Hops 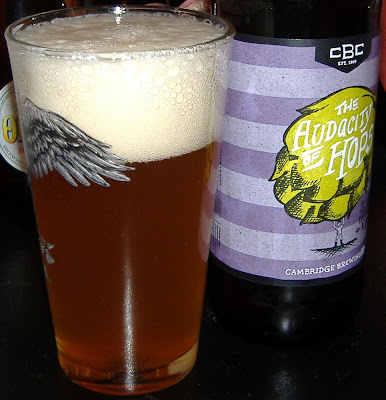 About: "Liberally hopped to an audacious degree, our Belgian Double IPA reaches across the aisle to bridge the seemingly contradictory brewing philosophies of the old world and new. Our beer uses generous portions of Pilsner and Vienna malts to give it its hazy golden color and rocky white head. Two independent dry hop additions of Simcoe, Chinook, Amarillo, Hallertauer, and Spalt put aside their differences to form a delicious coalition. Floral grassiness dominates the nose with fruity hints of bright citrus well represented. Its subtle spicy flavor comes from a Belgian yeast as well as generous doses of German hops in the kettle. These aggressive flavors are complemented by a determined bitterness and a full but dry finish. All of these characteristics come together in a nonpartisan spirit of cooperation to form a beer that is both righteously flavorful and drinkable."

Thoughts: At first this beer poured one of the lightest straw yellows that I've ever seen! Furiously with a huge super opaque white head, the beer gets a little darker and pretty hazy quick in the glass. There's quite a few carbonation bubbles rising up.

Let's smell it. Yeah, this one will wake you up. Dark lord! It's as if that huge f'n hop on the bottle art just crawled up my nose and exploded all over my brain. Sweet, spicy, little bit of pine and flowers. It takes a while for that Belgian yeast to come through, but if you breath in for half a minute it shows up.

Taste time. Ooh! The Audacity! Initial hop bite that blasts the head backwards. Swishing around the mouth, and it tastes pretty damn sweet. Breathing in there's a little pop of that spicy yeast and bitterness. After the first hop bite it gets a bit smoother, though it's still strong. Almost blinding, like an over chlorinated pool. I know that probably sounds strange or bad, but don't worry... if you're into hop bombs then you'll totally dig this. Belgian yeast doesn't overtake the brew, but rather falls into the background. It's peppery, flowery, and not too bitter all around. Slight bit of citrus funk in the aftertaste. Alcohol is well hidden, probably since it's overpowered by the immense taste.

The head on this brew is going nowhere as I drink it. I'm pretty sensitive to Belgian yeast and while it's somewhat noticeable here it's still very laid back and I like that. It gives the beer a more of a unique flavor that mixes in very well, and is nothing short of enjoyable. I've still got to figure out which one of these hops is giving me that dusty, stale, grandma's hard candy taste. You know, the jar of candy where you go to take one but the whole bunch lifts up with it because it's been so long? It's pretty minor though. Probably just the grassy tone hitting me hard. They obviously chose a perfect name for this beer.

I poured the rest of the bottle into my pint glass, and now almost finished with the bomber, I'm noticing a few little bunches of friends around the bottom. Sediment or bits of hop flowers... I hope it's one of those ...looks like cracked black pepper and I'm going to drink it. Cheers!

Email ThisBlogThis!Share to TwitterShare to FacebookShare to Pinterest
What the... Double IPA, First Batch, Massachusetts Beer