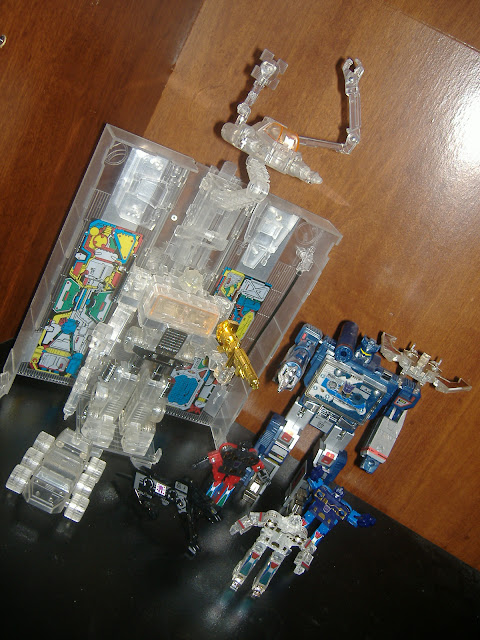 The picture posted is of my KO Clear Optimus Prime w/  KO Clear Buzzsaw and Rumble (the card features Lazerbeak and Frenzy). Matched with my official reissue of Soundwave for purposes of visuals, along with Rumble, Frenzy, Ravage, and Overkill. I've got to say that it all looks gravy. KO Optimus Prime came with a few different parts from the original and re-release. First, the hands are a little bigger and even though this is a clear-former they are very watered-down cool-aid purple. I actually like the new hands as they're cooler than the originals. Then there's the Die-Cast metal Gold gun that wasn't even advertised but came in total ownage style.  Now for some good news: My order has shipped from BigBadToyStore... and it's a figure I've been waiting to see happen for about ten years now. It's going to be sweet as hell, so stay tuned.

Well, Colton Harris-Moore finally got apprehended. Not going to say "caught" since well, we never really know do we? As in, what kind of lucrative deal he was offered to be "taken in" and such... but no matter how you feel about the 'goin's on's', or what your stance on governmental bullshit happens to be (ie, "we gotta pay them darn taxes from teh planes he done 'crashed", "he's a criminal", ect...), I was downright rootin' for the guy. It could be like another 'Catch Me If You Can' (a very decent non-horror movie starring Leo and Tom that this could fit in quite well with if done right). Sell those rights Colton, and get some real cash once things settle. Or be used to your best ability, either way or maybe both. No matter what you do my advice is to live the dream, and if you've gotta endure the nightmare for a while, don't forget that at some point your dreams really will come true since you've got the talent. Head up, and stay strong. Not that I need to tell ya. Just remember that in America non-violent criminals (especially the eccentric ones) get thirty year sentences while violent thugs who assault people on a daily basis over a Prostitute or a Snickers Bar get six months and/or sometimes not even that and just probation. Momma may have tried, but now is the time for the American Public to try harder and support this SOB.
Laid to Unrest by DrunkethWizerd

Is your purchase the new Grimlock?

No. But... I will purchase the Masterpiece Grimlock, as well, as the new Piranacon reissue which comes in the US style MP clear boxes. There were two MP Grimlocks, the normal went for like 90$ and the other for nearly 300$~! Both Japanese exclusive, but the US is going to feature slightly different apps that resemble the more expensive figure, and all those special features are sweet lookin' (esp the color changing eyes).

And Piranacon, the combiner from 1988's Super God Masterforce, holy shit dude, I didn't see that coming but it'll be damn good to get some combiners again. I heard a rumor that they're going to be releasing Prediking as well. That combiner alone goes for well over 600$ these days, so to get a new one for sixty bucks? Fuck yeah.