After two false starts (one an interview with Lucio’s daughter Antonella on regards to the CD and rokOPERA’s compilation of film quotes laid over the music), GWAR’s version of the Zombi2 lead track kicks in… and boy let me tell you, it’s got one sinister robotic vibe to it, which may sound strange since it was so tribal and un-electronic upon creation. It’s as if the theme had been shot out into deep space, hitting Decepticon radar and Soundwave is recreating what he deciphered to his master, The Almighty Megatron. It’s cold, grim and nearly tentacle rapish.

Carfax then hits you with an absolutely insane mix of severe gothic tones of metal, jazz, classical and just plain electronic strangeness in their Beyond suite. Afterwards, Alucarda steps in with a softer bit from the film. Five tracks to Fulci’s House by the Cemetery are next on the list, one of them by none other than Nile! Hell, who would have thought… I’m just surprised they chose a track from this film and not Manhattan Baby. You know, with all the fuckin’ pyramids and all! But let’s not dwell on the strange shit, shall we not? Al Festa, naturally, chooses and composes the gheyest sounding track on the disc… not that it’s much of a surprise if you’ve seen Fatal Frames(!). The other House tracks are good instrumentals, ON/OFF’s being the best out of the three. 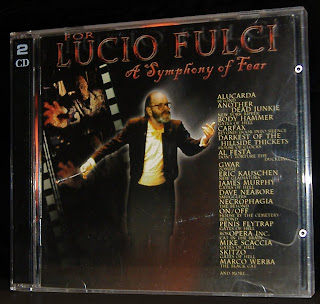 Then things start to get weird. Darkest of the Hillside Thickets busts out with a light, fluffy tune about Fulci’s House of Clocks… they sound like a happy-go-lucky Misfits(I use that as a generic term), and they apparently normally sing about H.P. Lovecraft. Either way, I wasn’t really diggin’ it, but that’s just me. Next up, Still Sad gives a very short but beautifully rendered suite from the film. WARNING! Now is the time to freak out!!1 Four tracks derived from. . . . . The GATES . . . OF . . . HELL! First up is Penis Flytrap with "Crryyyy Tears of Bloooooood!" Be forewarned, and not sober, when you listen to this track. You may just start to bash your own head in listening to this, but no doubt, this woman’s as beautiful as her voice. Doomstone comes next with song Twisted Priest, and its supposedly “black metal-ish”. Seeing as I’m not up to date on Doomstone and this may not represent one of their original songs, I’ll not comment on how I didn’t dig that it wasn’t as much black metal, but more of a Morbid Angel meets Phil Collins type sound. Somebody needs to let me know. James Murphy and Deep Red do a listenable but overly synth sounding track next, and then, well, maybe I shouldn’t even comment on the last one for Gates, entitled “Head Over Heels” by Glen ‘Diablo’ McNeil, because fuckin’ hell, it makes me want to stab myself in the f’n eardrums with a thousand Snarf dicks. Why? Because that would be more pleasurable of a sensation. Hmm. Perhaps it’s a joke track or something. There’s no other way…

Rounding it off on Disc 1 is a complete non-stoppin’, butt-rockin’, drunken-hazen’, fall-asleep-inatin’ tune by rokOPERA to the tune of Conquest. It’s about eight minutes… Eight long ass mufuckin’ minutes, but maybe you’re into that sort of thing. I usually am, if the song kicks ass n’ shit, but yeah. The Black Cat gets its due next with an old school tribute from Marco Werba. It’s a nice Synth job, and it’s probably been a while since we all had one of those. And right before the cherry on the top too, which just happens to be a 1:24 minute portion of select audience reaction to a showing of The Beyond. It could have been better of an ending, but alas, it’s not an ending at all… that was just disc 1. So, let’s see how the other one fairs in comparison.

With disc 2, Alucarda bust in with their second suite to The Beyond... and it’s a lot better than their first offering since this is the main theme and it goes on for just over eight minutes. Only slight problem is that they don’t really do anything special with it other than just give it their signature sound. And while that’s usually ok for this sort of thing, their signature sound is too similar to the original source material in this case. That's not to say that it isn't completely beautiful. ON/OFF does their thing next with The Beyond and its damn near traumatic, quite frightening and reminiscent of the HENRY soundtrack which just rocks the f’n socks off the other two Beyond tracks on this disc. The last is from Necrophagia, and we’ve all heard enough of that one, so really there’s no bother mentioning. 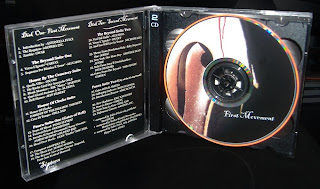 Sorry!, then pulls off a Manhattan Baby tribute that may just leave your brain in stitches, as it is Insane. Afterwards a New York Ripper track from Another Dead Junkie which is Mega-Man like and quite enjoyable. This Secret Garden does a Bela Lugosi's Dead type track for Voices From Beyond… it just makes me want to shoot some smack and hit the dance floor, goth style. You know, where you just kinda stand there and slowly rock back and forth? Then we hit another 3-Block of lust for the film that is THE GATES OF HELL! We’ve got three very unique and different takes on the film…. The first a goth-metal song from Skitzo, the second being some loops and electronic strangeness(which really kicks ass) from Body Hammer, and the third, a straight score job. The rest of the score jobs are for the films: New Gladiators, Door into Silence, Seven Black Notes and Contraband.

This Double-Disc set is sort of a “mixed bag”, but don’t get me wrong though as it is a definite Must Buy! A couple songs seem like inside jokes, most of the heavier punk stuff is just blatantly in-your-face shitty, and the people who did straight score replication in their own styles could have been a little more interesting… but then there are the gems! When it's good it's f'n tremendous, when it's ok it's still enjoyable and when it sucks, you'll be bound to go on a demented rampage, demanding to know what the meaning of this is!

"For Lucio Fulci: A Symphony of Fear" comes with a 16 page booklet that lets you know about the bands, and how much a certain someone loves ol’ Lucio… Now, Graveside Entertainment was most directly responsible for this sweet genre release, and they teamed with Blackest Heart Media. Both of them used to sell UNCUT VHS dupes of all your favorite films, before the VHS biz went down the drain (apparently!?) and people over here got the rights to sell shitty movies. The people who started Graveside were, I do believe, members of the band Alucarda themselves. I remember back in the day on their page the band was mad pimped out. I actually ordered my first two tapes from Graveside back in "96, Argento's Tenebrae and Deep Red. Not exactly sure what happened with them after their collaborations with BHM, but as you should know, Blackest rolled out and transformed into Rotten Cotton Graphics. This time around selling T-Shirts, the remaining bit of their Merch, and making their Black Devil Doll film.

Even though some of the songs here may not be "good" or fit your tastes, you can really feel that a lot of love went into this release. And I guess that counts for something... right? Almost forgot, this 2Disc set was originally going to either be 3Discer or for those who pre-ordered it, you would later get a third. I'm pretty sure nothing came of this and the third disc was never made. Sad as that is, there's still nothing sadder than not owning this release at all. And that my fiends, is me rubbing it in. 7/10 Rating.
Laid to Unrest by DrunkethWizerd

Email ThisBlogThis!Share to TwitterShare to FacebookShare to Pinterest
What the... CDs, Fulci, Horror, Movies, Soundtrack

I agree, some tracks suck, but man, most are completely awesome.

The lead singer of Skitzo was actually on an episode of Judge Judy for vomiting on an audience member on-stage. The woman had no idea that was the band's gimmick, LOL.

Dude, I think that chick was boning every member of the band, their mates, and their dealers... just take a look at her. It was a complete publicity setup that worked out probably not too well, but that's cool. ;)

Hahahaha, I thought it was real all this time...

Also thanks for the link in this entry!