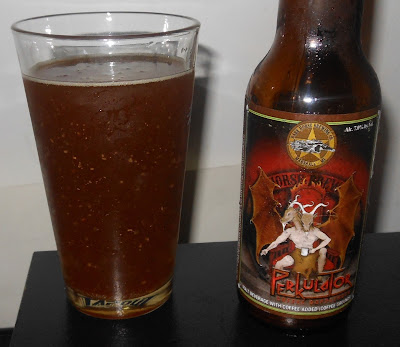 About: "This is a true dopplebock and Dark Horse Brewing’s only publicly distributed lager. It was so normal that we couldn't stand it so we made it into a coffee dopplebock. Ha, take that Germany, with your Reinheitsgebot purity law! Anyway, we use fare trade organic coffee from our friends at The Ugly Mug Cafe in Ypsilanti, MI. We did a label contest and opened it up to the public for this beer. We had so many awesome entries that we couldn't just pick one winner so we have 2 labels for this beer. We stagger the bottles in the six packs but with no order in mind."

Thoughts: As I look at this bottle I notice a thick layer of soil deposit on the bottom, and as I flip the bottle once and hold it up to the light I see some absolutely massive floaties in there. Am I afraid? Afraid to die? Don't be afraid... to try. Not only do those taunting flakes of hopefully non-poisonous artifacts inside give me worry, but the label of this beer has a double-headed Goat Devil with demon wings on the fuckin' front!

Guess I'll pour it out... into my stomach that is!! Perkulator poured a murky as shit, hazy vomit looking brown color with a spiraling head that looks like someone spit in my beer. There's a shit-ton of flaky debris suspended in animation and no, wait, the flakes are slowly descending. Probably back from whence they came. And now they're rising back up, what in the fuck... ok, they're just bouncing around. I look inside the bottle and notice a half ring layer of goop at the bottom, and it looks pretty gross. I wait a minute for it to warm, and then I pour it into the glass.

What the hell is wrong with me I think, but this is the stuff that nightmares are made if and I'm willing to crawl through fire and brimstone, or at least shit out my intestinal track tomorrow morning to review this beer, just for you! Whoever you are reading this.

I lean in and put my nose to the glass. It's just as I expected! This coffee dopplebock smells just like coffee. Those clever bastards. There's a rich malty undercurrent and a lot of crazy spice in the forefront.

I say a backwards prayer and then put the stuff inside of me. It tastes just like coffee. It's not intense at all, or rotten thankfully, but instead rather sweet, mild and tasty. A little raw, and not as spiced as the nose would let you believe, but raw sugar like sweet and in the end it's overly sweet. None too expected. It's actually really good, if a little burnt, and if you've every bought an iced coffee you'll probably like this. Also, as an added bonus this stuff will get you drunk.

Laid to Unrest by DrunkethWizerd 2 comments: 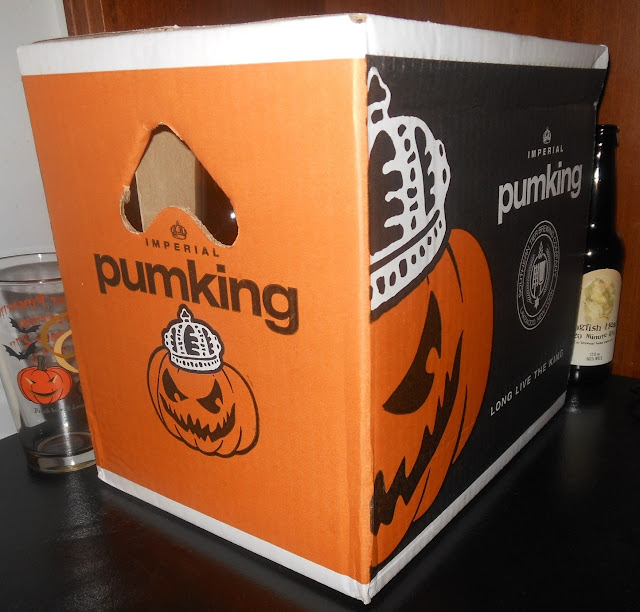 That is all.
Laid to Unrest by DrunkethWizerd 3 comments:

This lovely piece of work is inbetween the stages of sketch and final product. If it's halfway done, more or less I couldn't really tell you as I never exactly plan how these things work out. All I've done so far outside of the initial sketch is lay down some hard lines. This sketch sat in a pile of papers for about eight months or more, and while I picked it up a few times I never really took to it as it was downright fucking ridiculous looking with huge bulbous teeth that covered about half of the face... 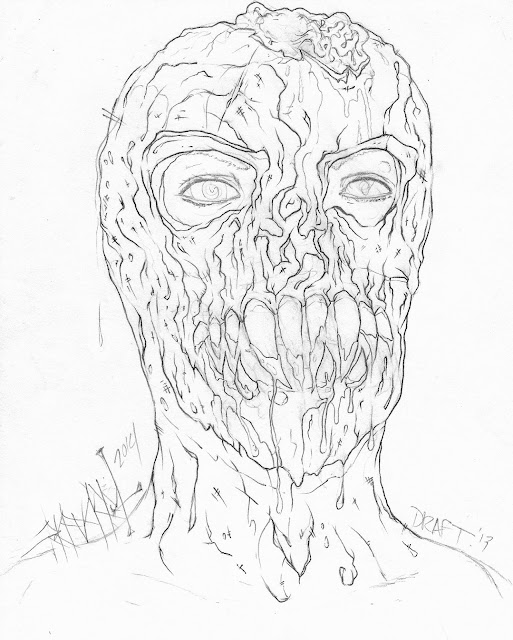 ...but after downing a few bottles of Hoptimum, I took a liking to it and started fleshing things out. So far I like the way things are going with it. It reminds me of Burial Ground, Fulci's Zombie, Jason Voorhees and a Rotting Jack-O-Lantern. This is going to be part of my series entitled "Masks", which I have already been posting: Check it. If I ever get time you'll see some shading and coloring coming up next. I'm thinking of going with the whole Pumpkin look and giving this one oranges and browns. I'm figuring that the neck will be painted while the mask kinda just fits over the girl's head.

Email ThisBlogThis!Share to TwitterShare to FacebookShare to Pinterest
What the... Artwork, Horror, Masks, Skulls 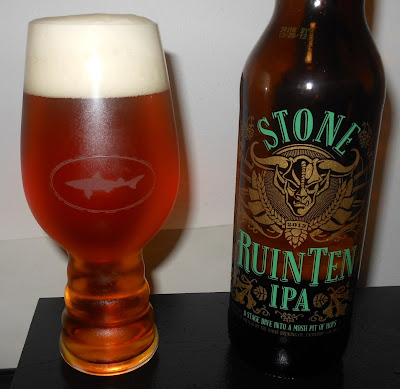 About: "We first released this decidedly indelicate beer in 2012, as Stone Ruination Tenth Anniversary IPA, to celebrate the 10th anniversary of our belovedly bitter Stone Ruination IPA. Stone RuinTen IPA uses the same recklessly hoppy recipe as the 2012 release; only the name has changed, as we plan to unleash this belligerently delicious hop monster upon the public annually from now on. We packed a whopping five pounds of hops into each barrel, and cranked up the ABV to stand up to the hop onslaught. The results are glorious, and we know you'll rejoice in tasting this audacious gem of hoppy splendor once again. You're welcome."

Thoughts: Just released. Drank 6/23/13 with a Drink by date of 8/28/13. Posting the review 8/11/13 due to pure laziness and other recent technical problems, overworking and life outside the computer. What a beautiful bottle huh? I don't really get how they abbreviated it to "RuinTen" but whatever... I mean, I get it, but it's still just weird to me.

I never actually got a chance to try Stone's Tenth Anniversary Ale which upset me quite a bit since literally everyone was drinking the stuff and bragging about it online, posting photos and even thugged out selfies for some reason or another. Sure, that kind of thing shouldn't matter but it would be nice to always get a chance to buy a release I've been waiting for or hearing about that's all.

RuinTen poured a beautiful shade of orange. Man... what a nice looking brew this one is. The beer is slightly hazy but transparent enough to read these words through. It's got a light slightly cream colored head that looks very white in the photo above.

Onto the taste: heavy on the leafy hops, drenched in resin, drowned in oils, with a big splash of heat, a little burning haze right behind it and a bitter citrusy finish. This stuff is seriously dank. A toasty breaded malt rests firmly as the fiery assault of hops blister the tongue. Hang on - I just offered some to my woman. She smelt it, then plugged her nose and took a sip. Afterwards she made her way to the bathroom sink and told me that it tastes "like shit!" Nice. This is brutal and blistering. I love it. Booze is present, which I tend to enjoy. This bottle is a meal in itself, and I'm hungry so it's a good thing I bought two.

Smooth and creamy with an oily finish.The beer isn't all too thick, but the flavor lays the smack-down in such a way that it seems like it. It's not super overly bitter, but the bitterness hits strong and violently. It lingers for a long while but when it falls back a little bit of that sweetness limps in. There isn't a great balance on this one, but hell, it was never meant to be. Final thoughts: You want a beer smack to the face, here ya go. Afterthoughts: I still like "Enjoy By" better.

Email ThisBlogThis!Share to TwitterShare to FacebookShare to Pinterest
What the... Anniversary Ale, California Beer, Double IPA, Stone
Newer Posts Older Posts Home
Subscribe to: Posts (Atom)
My words are my own and as of posted from their creation forward I hereby claim originality to them. Pictures may prove to be promotional items and are the sole possessions of their respectful owners and/or companies. I do not sell, nor do I buy. I only rent, so therefore, nothing I own is truly mine.