Devil's Due (2014)
Rated R for boredom-inducing self-cutting and childbirth learning. 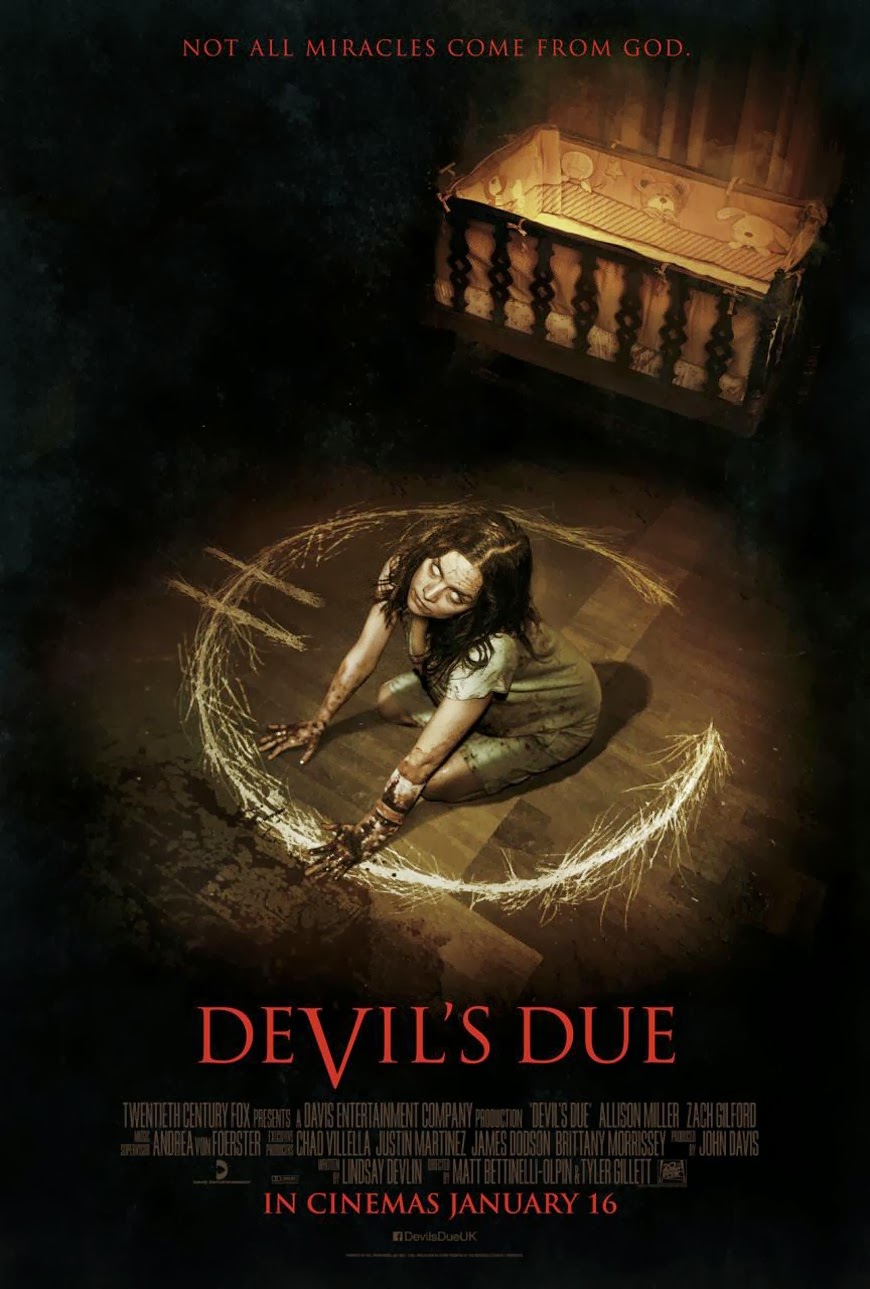 "Not all miracles come from god." Yeah... more like "Not all movies have a written fuckin' ending." The "plot": A newlywed couple go on their honeymoon in Costa Rica, drink way too much, most likely get drugged and are lured into a Satanic ritual in which the wife becomes impregnated by "evil forces". Hilarity ensues. All of this is half caught on video, just like everything else that happens, or doesn't happen rather.

I knew practically nothing about this movie before I went to see it. My fourteen year old niece called me up and told me that she wanted to go see this with me, so I figured what the hell. We've gone to the movies together for years now, seeing such gems as the complete Twilight series, the first Hunger Games, House at the End of the Street and Orphan. All I knew is that there was this prank video on youtube with a psycho, demon-possessed animatronic Devil Baby that was sort of a promotion for the film. I must have watched the clip about ten times that very morning, and loved every evil second of it. By far one of the best pranks on the net, the video is just downright the most amazing fucking thing evur, so check it out. The movie Devil's Due however, I'll tell you not to check out, since it totally sucks newborn nuts.

First of all, that totally awesome demonic baby is nowhere in the movie, so don't go in expecting any type of old school special effects or anything. And because of that don't go expecting, you know, a real payoff to the fucking movie! Because what we can assume, knowing nearly nothing about the movie, is that this woman is going to give birth and The Devil is somehow involved right? What we're dealing with here is a total sleight of hand job, a con, a ruse, trickery, skulduggery, a flawlessly deceptive marketing scheme, and yes, I am aware I just typed hand job. What this movie actually is, is a poorly conceived (see what I did there?) "found footage" film full of irrational and extremely lazy plot points, as well as some really shitty CGI.

But perhaps the film's biggest crime of all? It's painfully dull and so excruciatingly boring. Not only does it pretty much become a documentary on a pregnant woman's hospital visits for a third of the runtime, but the other third of the movie is just one pointless scene after another. It's pointless because none of it connects or goes anywhere. Some "weird stuff" happens and then it's never mentioned again, not by the characters and not by any further scene development. I was OK with it being one of those handheld "oh hey I'm a guy holding a camera" movies since I haven't really been overexposed to them (last one I was was Rec 3, a far superior film to this drivel). Of course the writers of this shit found their limitations to this style and had to set up some sort of system to capture footage, since this dude can't just hold a camera every second of the day.

Throughout the movie there are people in the background watching this couple. They are what I can only describe as the most laid back, low pressure, non-violent, squeamish bunch of Satan Worshipers ever committed to celluloid. One man stands across the street watching the house and after the lady and her husband notice, they scream at the guy and he scurries away. For some reason, they wait about seven months into the pregnancy before they go installing hidden cameras in every room of the couple's home. And on top of that we learn that they've got a empty house they're all squatting in which is just down the street. Considering this "mysterious" group of people have already chosen their targets, and had a place set up so closely to them, why in the fuck would they wait so goddamn long to install these cameras? Nobody knows because it is some stupid ass shit that's way.

I wonder if the dude across the street just went back to the run down house and told the other Sect members "Hey, this me standing across the street staring at the house like a fucking creepy weirdo thing isn't working out. Let's brainstorm some better ideas huh?" And the other guys were like, "Well we got all these monitors and camera equipment just laying around by our dog food bowls full of human embryos, maybe we should use this stuff." After the husband starts getting paranoid by his wife's "freaky" behavior, he decides to watch the footage from his honeymoon on the computer. He finds some strange ritual occurring while they were passed out, so he calls up his friend to come over. All of a sudden when he turns around the discs are missing. Really? He walked from the living room to the front door and they just disappeared? That is some weak ass shit.

There comes a point where the wife, who is a conveniently a "vegetarian", stares at the meat section in the supermarket for a long time. You immediately know that she's going to start gnawing on the raw meat, because you've seen it a thousand times before, and that's exactly what happens. There is a mesmerized kid in the background and his disgusted mom witnesses what he's looking at she drags him away, which is one of the films few humorous moments. Then there's a scene when she's in lamaze class and gets to her relaxed point or whatever, and all the other women start writhing around in pain. That probably had to be the freakiest moment, bucause I was thinking unholy shit all these women are about to have bloody miscarages and there's going to be screams of anguish. It could have been a powerful and gruseome scene, but just like everything else in the movie the camera just jump cuts and we're left with nothing. Was that too grim of a thought for the filmmakers?


On top of a whole lot of nothing happening, and the wife showing some supernatural type abilities that are never explored once some shit actually does happen, the most anticlimactic ending of all time (perhaps beating out that shit movie The Blair Witch Project's lame ass end shot) just left me with a look of "are you fucking serious?" on my face. That was it? No demon baby? Nothing? The ending after the ending also does a real shit job off ripping of the 1977 film Satan's Blood aka Escalofrío (which, like Rec 3, is also a far superior film to this drudge). This movie is lazy, slow, irritating, tension free, disjointed, annoyingly shot, and for the most part just plain boring. Devil's Due is a stillborn mess which makes me wish I would have aborted that theater. Oh, and don't even get me started on the evil Quake logo.

Email ThisBlogThis!Share to TwitterShare to FacebookShare to Pinterest
What the... Cinema Visit, Film Review, Horror, Movies, The Devil