This is technically my second time trying this ale (since I had a small swig at a tasting about a week back), but is my first buy and real drinking of the product. Oh, and welcome to my first ever beer review. 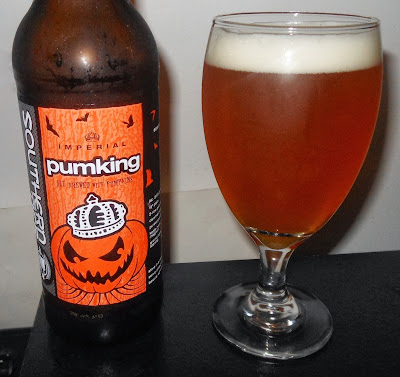 About: "Bewitched and brewed with pagan spirit! Pumking is an ode to Púca, a creature of Celtic folklore, who is both feared and respected by those who believe in it. Púca is said to waylay travelers throughout the night, tossing them on its back, and providing them the ride of their lives, from which they return forever changed. Brewed in the spirit of All Hallows Eve, a time of the year when spirits can make contact with the physical world and when magic is most potent. Pour Pumking into a goblet and allow it’s alluring spirit to overflow. As spicy aromas present themselves, let it’s deep copper color entrance you as your journey into this mystical brew has just begun. As the first drops touch your tongue a magical spell will bewitch your taste buds making it difficult to escape the Pumking. Malts: 2-row Pale, Caramel / Kettle Hops: Magnum / Aroma Hops: Sterling / Pureed Pumpkin."

Thoughts: Look at that evil motherfucker. This bottle is impossible not to see when you're walking through the shops. Love the little orange bats that are flying off to the right of the label. This bomber is truly fit for the king.


It's gotta orange rusty color that's somewhat translucent (heard that it was grainy like you'd want to chew it but it's not even hazy at all), a 1/4 inch finger head and the bubbles are very small. There doesn't look to be all that much carbonation, which I didn't expect. The head dissipated in no time flat.

This ale smells great! That's probably the best thing going for it, not that I'm knocking the taste, but I'd say that the aroma is a major attraction and focal point of this one. There's a strong pumpkin pie, gingerbread/graham crackers and cloves scent. I'm not really getting much of the cinnamon, but there's a little vanilla. I read one review saying this ale has a scent reminiscent of spicy creamed corn. When I read that I went back to the empty bottle for another smell, and yes, there it was. The aromas here completely engulf the senses. I could breathe this one in for days.

Nutmeg, Pumpkin Pie (surprise), Cloves, Brown Sugar. The faint hop aroma ain't that faint once you taste it. It's a strong ale and you can tell, but it's not too overpowering after the second and third gulp. The spices are strong and the taste is quite sweet, yet it's got a not-too-harsh kick to it. After drinking a bit over half of the bottle, the taste and smell seemed (and this was almost unnoticeable) vinegar-like.

Because of the light carbonation this was really easy to drink. It was however mouth coating and the slightest bit astringent, leaving me puckering like a kissing fish for a while.

Bittersweet, Metallic aftertaste is quite good with a long lingering finish. The flavors all seem to stand out, yet in the end it's pretty balanced. I like this ale, but probably wouldn't buy it on a regular (limited) basis  due to the price. One thing is for sure: The bottle has a very cool design. It really stands out what with that Evil Pumpkin(g) on the label. I think I'll be keeping it for a while.

NOTE: I'm not giving this ale a rating yet, since I'll be trying about a dozen or more pumpkin related drinks this month and at the end of all of it I'll be grading them on a curve. Cheers you crazy fothermuckers!

Nice review, man. I've tried this beer in years past and was never very fond of it, compared to other pumpkin ales. But the pallet changes and I tend to like Southern Tier's brews, so I grabbed a bottle this year. I've yet to try it, though your review has boosted my hopes.

Finally got around to drinking Pumking this weekend, and damn was it better than in years past. Pumpkin ales seem to change quite a bit from year to year, compared to other beers. Guess it has to do with the pumpkin crops and spices. I paid under $4 for the bottle and now I kinda wish I bought more than one.

If you paid under 4$ a bottle you should have bought about five of these things!