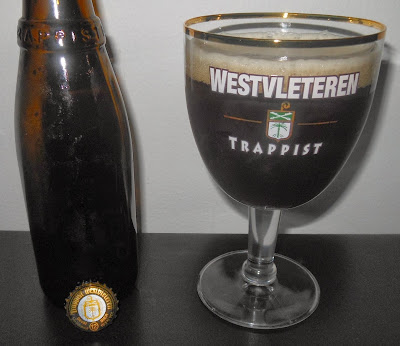 Thoughts: Westy 12 poured a dark brown color with some raspberry tones around the edges and a kahki colored head that build up quick and faded just as fast. Sediment flakes float throughout the bottom of the beer, but it's a lot harder to see here than on the Abt 12 since this beer is slightly darker.

This beer smells rich and creamy. There's a lot of plum and raisin in the forefront, it's got a rum cake vibe to it and it seems to be rather chocolaty. Dark fruits and grapes dominate before a fresh cut apple scent flows in, and then when the alcohol hits it's almost like chocolate and vanilla soft serve with berries. Very interesting. It's really sweet and indulgent smelling, with that Westmalle yeast laying low in the background. Swirling the glass, a huge aroma of Marciano cherries in a freshly opened jar floods the nose. Cool.

First gulp and an explosion of soft pepper, grain and yeast floods the mouth. It's got an immediate sting to it too. Plums and figs dance around on the tongue, while caramel spills all over the place and toasted apples heat up in the far off distance. It's almost like a cobbler, drowned in rum. Raw bready dough puffs up while a rolling thunder of booze flows by. There's a brilliant sweetness to this beer that kind of hits the tongue like spiked brass knuckles. It's weird because I can actually feel it like that. Whereas the Abt 12 hit with one huge upward spike, this one seems to pound downward with four spikes across the tongue. Then again, I'm moderately insane! The bitterness in Westy 12 is fairly strong and brings a harmonious balance to the beer. The sweetness levels rain down like blistering cold coals, but are extinguished abruptly by a smooth, warm and soothing bitterness that levels the platform. Tons of spices smothered in a gentle pepper flood the senses after every gulp, spiraling around and tickling the gum line.

Mouth feel is soft, wavy, and in a strange way, cleansing. It slightly dries the mouth, but refreshes at the same time which is odd. Perhaps this is magic beer? Aftertaste is low droning, pleasant, and rides out slowly. After a while a minute amount of rawness is felt, like a leafy hop breeze while breathing in. Drinking the remainder of the glass while the beer has warmed and a sensation of raw figs come through, followed by grainy water. The beer finishes clean, even with these occurrences. Everything apparently has its place within this beer, and knows when to make an appropriate retreat. Nicely done.

Damn, yo! Going buck wild with the Westys, son!

Having never sought them out myself, for lack of funds and ambition, I was quite excited to read all of your Westy reviews. Well done!

So, how does Abt 12 stack up to Westy 12? Is Westy 12 really so much better that it justifies the substantially higher cost?

I liked the St. Bernardus Abt 12 more than the Westy 12. It was more assertive, flavorful and like a roller coaster ride. The Westy 12 was like a fireworks show that blasted high and bright then eventually burnt out. Both of those things are cool, but the ride leaves you with adrenaline rushing through the system, while fireworks just leave a smile upward towards embers falling. Know what I mean?

Would I say that the cost of importing and price gouging is justified? No fuckin' way dude. My advise is buy St. Bernardus Abt 12 and buy lots of it whenever you want some. See, I held the Westy 12 gift set (teh brick) in my hands three different times. The first two times it was full price at $80 and there were lots of em, but on the last fateful trip before I never saw it again, it was $45 and only one left. I just set it back down and bought some other bullshit (even though I could have charged it).

Totally not realizing what I just did, I went back the next weekend and it was gone. I never said I was a smart guy, but that was two goblets and six bottles of Westy 12. That shit haunted me man! Maybe I've got emotional problems, who knows... but the silver lining came from my insanity filled online purchase:

Not only did I drink all three, but found that Westy Blond was my favorite of them all.

I know exactly what you mean. I too would have been kicking myself for passing up a $45 Westy gift box. We never even got any out in my neck of the woods. And I certainly wasn't waiting in line for hours, fighting off a bunch of hipsters only to shell out over $100 bucks for a couple of bottles. But that's life, eh?

I've had a bottle of Abt 12 sitting in the back of my fridge for a long while. Your review inspired me to crack that bitch open. It is some pretty awesome stuff. The layers of flavors are just delicious and like any great "big" beer, more keep coming out as it warms. The mouth feel is incredible. It just goes down so smooth for a 10% quad. I could have drank another few bottles. I'm not the biggest Belgian beer fan, but I'm gonna have to pick some more up.