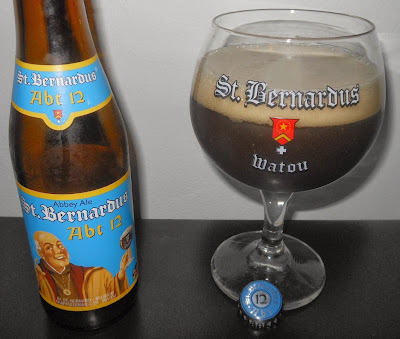 About: "Shortly after the Second World War, the Trappist Monastery St.Sixtus in Westvleteren was looking for somebody to commercialize their beer because they did not want to do that themselves anymore. They gave a license to the cheese factory, and Brewery St.Bernard was founded. The brew master from Westvleteren, Mathieu Szafranski (from Polish origin) became a partner in the brewery and brought along the recipes, the know-how and the St.Sixtus yeast strain. We started selling the Trappist beers under the brand names Trappist Westvleteren, St.Sixtus or even later Sixtus. During a period of 46 years we brewed and commercialized the beers while the monks continued to brew for themselves and for sales to 3 pubs in the neighborhood, amongst which In De Vrede, just next to the monastery. In 1992 the license came to an end and since then we are brewing the same beers, with the same recipes, but under a different brand name: St.Bernardus."

Thoughts: Abt 12 poured a chestnut brown, raspberry color with a huge beige head full of tiny bubbles. As I hold the beer up to the light I see an absolute ton of sediment flake floating like asteroids all throughout space. The head hasn't diminished in about two minutes so far and I don't think it ever will.

The scent on this one is beautiful. There's intense plum like dark fruits, a sugary sweetness, peppery spices, a little bit of clove, and it smells a little like a rum cake. Just like the other St. Bernardus beers, that gorgeous yeast profile just flows forever through it. To sum up the smell on this one in a single word it would be candy. Swirl the glass and it erupts upward into the nostrils, delivering a minor sting of what's to come.

First sip and it's so rich, incredibly flavorful, and damn smooth. The alcohol immediately warms the insides, but is hidden extremely well inside the mouth. It tastes sweet like brown sugar and leaves a cold tickling haze like a clove cigarette. Tons of spice ravages the tongue and inner cheeks, and a swift kick at the end spirals through the bloodstream drilling into the brain. Man, this stuff is sweet. Those European hops are doing one hell of a job trying to hold it back too. Fruit like flavors bounce all over the place, showing up in random spots kinda like fireworks going off. There's caramel apple, fresh sliced pear covered in cinnamon and black pepper, grape must, ripped open raw fig, and even some nearly spoiled banana. While the sweetness here hits a high peak, spiking high above the spice and bitter departments at one point, all three of those things are blended superbly here.

Mouth feel is soft and fuzzy, and leaves a thick coating on the teeth. After a while the mixture of the alcohol strength, peppery yeast and grassy hops give way to a drying sensation and a grainy yet enjoyable aftertaste. Abt 12 has no doubt earned its spot in the back of my fridge.