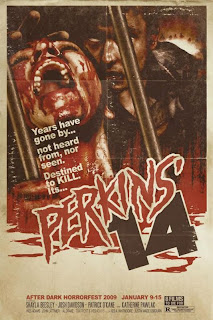 I had absolutely no clue as to what Perkins' 14 (2009) was before I viewed it. I had absolutely no clue as to what Perkins' 14 was after I viewed it, either. Oh, I read the synopsis on the back of the cover that day I rented it from Cockbusters. It left me with little to go on, and also, I had read nothing about the film online. I'd only seen flash ads... so I could only speculate. Is this a movie about Anthony Perkins raping 14 young lads? I sure as fuck hope not! After reading that synopsis and seeing the film, one has to wonder what the hell whoever wrote it up was thinking, or watching for that matter. So I start watching what should be a horror film about Norman knows what, and it's a little slow. But it starts to get intense as the police-man father of a missing son senses that the strange glasses-wearing man in the overnight cell (with all the pharmaceuticals out in his unmarked white van that he just illegally searched) might just be the guy who kidnapped him ten years prior. Of course none of his colleagues give him any positive reinforcement on the matter since the guy's been a raging flask sipper since those days and seems the paranoid type.

Naturally, daddy (Patrick O'Kain) takes it upon himself (and a cop buddy who supposedly owes him one) to go search the creepy dude's basement, only to find... you guessed it: 14 teenagers that he'd kidnapped years ago, tortured, fed PCP to and molested, transforming them into... Super Zombie-like creatures with a bloodlust unmatched by one of Michael Vick's doberman pinschers! Yeeeaaahhh... okay, so Perkins' 14 starts out emotional yet low budget and gets your attention. Then it hits you with this retarded curve ball which surprisingly, caught my interest even more, though in a WTF type manner. Of course, the son is one of the 14 and dad is hellbent on saving him, even though he's going around tearing people to shreds. From here on in, every single character acts like a completely worthless moron as the fourteen rampage throughout town. So is the way of the slaughter. Every single bad decision to be made is made, that dumbass lead singer of the new "misfits" is as lame as it gets, and the cheating wife (hot as all fuck Mihaela Mihut) is about as useful as a glad bag full of wet lopped-off testicles. 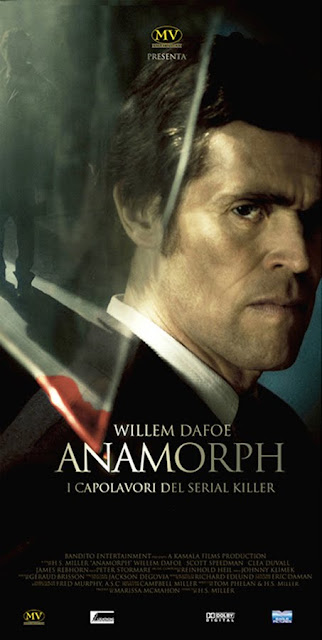 Honestly, I don't know what to say about Perkins' 14. I'm not going to sit here and type that I claim it was the worst movie I've ever seen. I don't even think it's as bad as reviewers online say. The Ad campaign, synopsis and promotional tools were all vague, confusing and most likely a smokescreen. Effective, perhaps, but it's as if After Dark Films had no idea what the hell this movie is and uh, I guess I can't blame them. The synopsis on Wiki had to be put together like a f'n puzzle, so no wonder they just went with some quick and elusive wording on the back cover. You're probably not going to be cheering, say if you were watching Laid To Rest for example... except maybe when the people you want to die (all the characters, pretty much) get ripped up. I say give it a viewing, but be warned... oh, and there's this quick voice-over after the final kill that will have your head spinning. It might just pop off. For it makes less sense than all the characters in this film combined had.

Anamorph (2007) fared better in my opinion but suffers many of the same drawbacks as Perkins' 14. Fortunately for this Psychological Thriller (American Giallo) it doesn't veer too far off into the overly questionable (not-zombie zombies?), and then there's Willem Dafoe, who just f'n steals the damn show every single time. And you know who's a good balance to Dafoe? Boring ass white bread Scott Speedman, that's right. Not that anyone needs to make the guy look good, but if a tortured soul detective with a... wait for it... nip drinking problem(!) needs a younger dude backing him up, it might as well be this boring fuck, am I right? Listen, I had no idea what the hell Anamorph was going to be about... I just got "lucky" and caught it on IFC.

Everything was going good, despite a few cliches here and there... and even some of the same old story. I've since read it being compared to Se7en, Kiss The Girls and even Dario Argento's Stendhal Syndrome. I didn't really catch the Kiss The Girls vibe, but the other two definitely. I could have seen Argento doing this film actually, maybe even making it better, less comprehensible even. The film's title refers to "anamorphosis", which is a way of creating hidden art that becomes visible from a certain vantage point. This is the killer's way of fucking with the protagonists. There are some great murder set pieces where Detective Dafoe has to finish the murderer / artist's grisly works of human blood art. It's to put it most simply, beautiful. There's even a scene where he steps inside a huge painting and makes out with a catfish (Clea DuVall).

Overall the story is a bit predictable, but the acting is all gravy and there's fun scenes where limbs and dead bodies are hanging all about; their meanings to be deciphered by our drunken hero. Speedman's big cop revelation is absurd as they get (I mean, who's got a reflective cup made out of shiny metal anyways?). The ending gets good, gets you pumped... but sadly, ends up botched like one of Mick Foley's Hell in a Cell cage drops. I get what they were going for, and it's somewhat OK, but the finale CGI work was confusing to the eyes and poorly done (even more so with the rest of the effects looking traditional). Also, it went out on a question mark note, which I normally don't mind, but since the big revelation was blurry and hard to comprehend, that ain't good. I watched this on a rainy Sunday morning, and I'd suggest if you're going to see this movie, do the same. Preferably with a couple nips stashed away for easy plucking.

Email ThisBlogThis!Share to TwitterShare to FacebookShare to Pinterest
What the... Film Review, Horror, Independent, Movies