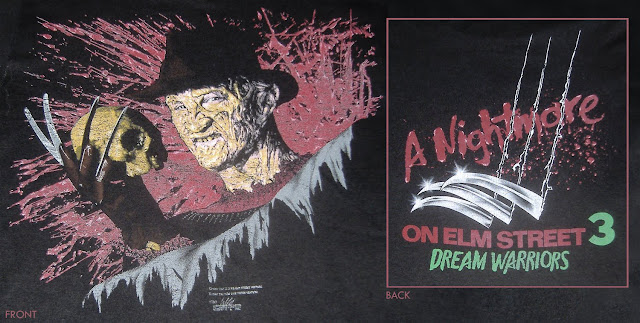 Well, since Freddy’s on top again (Nancy’s favorite position, according to him) and since I’m busy working on bigger posts (trying at least), I guess I’ll have to get accustomed to shredding out some 'filler' here and there. The more I thought about it, the more I realized that… I’ve got some ‘OK’ stuff to share. It is indeed impossible to make every single blog post irresistible, and trying is just irritating after a long day of irrational inane bullshit. So here it is: A couple pictures of the NoES 3 shirt that I bought back in the day, 1998. 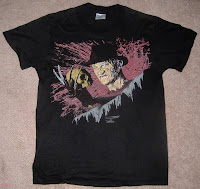 It’s a medium. I used to fit in it almost when I was rail thin... back then I wasn’t as f’n buff and sweet as I am now. Not that Brew, Chili Fries and Poutine make a man buff, but it’s a start… anyways, I got this shirt in a store that I had never been to before. My friend and I both walked in, saw it and ran fast as hell. I of course, being a sprinter, snagged it much to his dismay. Got two door sized Freddy posters that day as well, but the bottoms of those were eventually ripped up and peed on by my long lost cat Mephistopheles. Little fukcer. No matter, I've still got some other NoES merch laying around the place so expect to see some more of what I gots in the near future... you little meatballs.
Laid to Unrest by DrunkethWizerd

Email ThisBlogThis!Share to TwitterShare to FacebookShare to Pinterest
What the... Clothes, Horror, NoES

Haha. Well worth sharing, I'm sure everyone will agree.

And here is that Bridgette chick from Girls Next Door wearing that exact shirt at the premiere of the new movie. She had to go and chop it up.