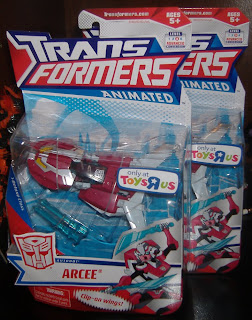 Over the years I’ve seen only two prototypes for Arcee toys that I’ve absolutely loved. One was a fully painted and transformable custom (?) from sometime back in 1998 that mirrored the GeeWun character perfectly. The second is one currently in production by a third party manufacturer that looks f’n gorgeous and shall be mine. Other than that, Arcee has had a rough toy past. Firstly, there’s this idea from toy companies that female characters as figures, don’t sell. This for one pisses me off, since the female characters are usually my favorites… apart from the most evil, monstrous Villains. So right there its shaky ground. Secondly, there’s never really been an accurate representation of Arcee. She’s been made into a motorcycle numerous times while her original design and form have been avoided. Why? Incarnations of her have been bulky (and in one case Overly bulky as a toy that should have never been painted pink and named after her), and she was once an exclusive repaint of Transmetal 2 Blackarachnia. So imagine my delight when Hasbro finally released the Animated Arcee which not only transforms into a pink Cybertronian car, but also looks a lot like the original character and has a sweet ass design.

The only problem… it’s a ToysRUs exclusive, there were limited quantities made and on top of all that, seemingly all ToysRUs stores around me are all selling shit from a year ago. Shit that they can’t get rid of so they’re offering deals every week and yet, the thirty boxes each of shelfwarmers still aren’t moving. Thus, they don’t put the new stuff on the shelves… provided they even have the new stuff. So I travel. An hour here, forty miles there, and nothing… every weekend for two months, in every spectrum of Mall from ghetto to uncomfortably rich however that is possible. I guess my area is diverse, depending on which way you point your finger. I found nothing at all. Then amazingly, I found a mall only a half an hour away in a town that I’ve never been to and you know what? This mall has everything! Best mall I’ve been to by far ever in my life. The ToysRUs across the street from it had three Arcee figures; I bought two (pictured) and finally snagged the Revenge of the Fallen NEST Lockdown figure (also) which is one of the best action figures ever made in history. So incredibly badass! And after traveling a lot and seeing some shit that I would have preferred to not ever experience again, the town I visited that day was so clean. Just driving down the street I saw not a single piece of trash on the street, not even when I passed McDonalds. The golden arches were sparkling like they’d been dipped in real gold and polished.
So I got these two that I had been searching for (because face it, I’m not paying some thirty-five dollars or more online for an already sold out Arcee figure when I can buy two of them for twenty [if I can find em])… got my third NEST sticker and sent off for my Mail-In Ravage, which hopefully should arrive soon. Boo-yah! Yeah, and I guess I also picked up Legends (which means mini-figure) Decepticon turncoat, ugly bugger and major robo-perv Wheel-E. You know, the one that humped Megan Fox’s leg… er, yeah. So check it out: Here's a GALLERY of Animated Arcee, a GALLERY of RotF Lockdown and here are Peaugh's youtube reviews for Arc and Lock... I'd say watch the vids. He likes to somtimes pop the arms off the figures, but he really shows you how neat these figures are.