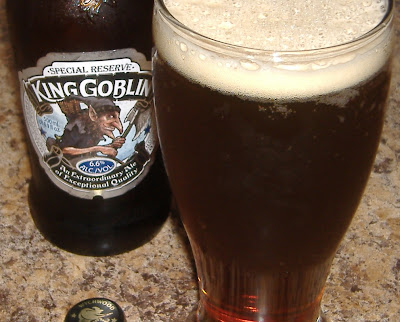 About: "Brewed only on a Full Lunar Moon. As the full moon casts its eerie light over the shadowy old Eagle Brewery, a magical brew gurgles forth from the casks. A beer enlivened by the energies of the universe, when the elements are converging into a harmonious alignment. Truly a brew fit for a celestial majesty. KingGoblin is hand crafted from roasted chocolate and crystal malts, with a timely infusion of fuggles, sovereign, styrian and cascade hops to produce an indulgently rich, full, smooth beer of exceptional quality and character. A full, rich, sublimely fruity and satisfying indulgent beer; a beer for the connoisseur of the finer things."

Thoughts: Poured a dark dark raspberry colored amber with a white bubbly head that left a small cloud of foam in the middle.

I picked this bottle up twice thinking it was their standard Hobgoblin while I was browsing a small independently owned supermarket that I'd never been to before (Imagine that! Of all the places to finally find this). As I started walking away I kept thinking to myself about that silver foil on the label and that I thought I saw the words "Special Reserve". In fact, I was quite sure of it, though clouded-minded at the time. So I floated back and noticed what it was: KINGGoblin! I snatched it up quickly. This place had a nice selection of winter seasonal brews on display, but not a lot of them, or much of anything else except for a small row of wines and standard US lagers. Still, they went through the trouble of labeling an area right inside the middle of the store with colorful chalk on a board displaying the Christmas beers! The owner must be a real seasonal guy. I wish the big markets would do this (not a chance!).

Smells a little bit like sour berries. Hmm. Sour cherry and stinky floral hops at first, and a bit of chocolate malt afterwards.

Kind of reminds me of that Innis and Gunn's Whiskey barrel brew, which is also an English Strong Ale. It's a bit fruity, and bitter, and yup, there's a sourness lingering throughout the brew. It's bready, and nutty, and that mixed with the berry tones makes it reminiscent of toast and jam which is quite right English. Still, there is a bit of a grape wine thing going on that I usually don't get along with. Here, it's not so bad actually. Very tolerable actually. That's rare.

Thick and fluttering at first, smooth and thinly fading later. Leaves a nice aftertaste, but is a bit drying.

KingGoblin is a very cool beer with a slightly strong alcohol that doesn't show itself too much... quite mischievous I'd say! It might take a little getting used to, but I could imagine myself easily pounding about five or six of these no problem. The tastes seem to meld after a while with my brain, like it's sneaking up on me. It probably doesn't help that every time I glance to my left I see a fuckin' evil pointed-nosed goblin with an axe and a devilish grin staring at me.