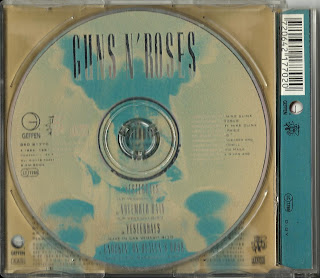 [Watch teh MUSIC VIDEO] Get that outta the way. Yesterdays was never my favorite GNR song. They've got a plethora of songs that are so ridiculously badass, that, why would I at such a young age dig Yesterdays? Never at any point did I dislike the track, but when I would think of GNR or talk about 'em, it never really came up. The fact is, I like every single song on both Use Your Illusion albums. Everyone loves Appetite For Destruction, but people get weird when the UYI albums come up. 'Which one is better, which has the best songs', and so on... but to me, these albums aren't even split. Perhaps they tried to vibe it out by splitting 'em, but there's no denying that these two albums were intertwined from the get. [Just in case you wish to know, these are my absolute favorites in order or appearance: Dust N' Bones, Back Off Bitch, Coma, Breakdown & Locomotive.] Man, when I would bake it was either Coma or Loco, but I love every single track on both of these. Yesterdays, if it were sung by anyone other than Axl Rose, or played by anyone other than Guns N' Roses, I would probably say that it sucks. Not on the terms of songwriting, or material, but perhaps on the lack of evil disassociation regarding living life and thinking about the past. But ghosts got nothin' but time to fuck with your brain, so...
Axl's scratchy, raspy-ass voice really sells the song and the band is at their peak so there's no going wrong with the material. Even if it's not their usual Hard-Rock, it's Rock and it's not a Ballad. The song has grown on me since I've gotten older like the old fuck that I am. Back when I first heard it the only Yesterdays that I knew wuz suckin' on me mum's tittie. Now that I've felt the pain called "life", I know what it feels like to remember whatever the fuck it is that they were singing about. Hm. Regarding the Live version: Even though Axl is working with a live stage show, back-up gospel singers and his trustworthy band, he sounds like he's about to spit up a fuckin' lung. No wonder he didn't want to do Encores (and this Live song is one), or even start to sing more than three songs at gigs he felt weren't worthy! That's Axl though, and we wouldn't have him any other way... or something. Knockin' On Heaven's Door isn't going to be a good song no matter who sings it so fuckitor. :( I guess they liked that version of the song since they included it on a few Singles from around the world.

Email ThisBlogThis!Share to TwitterShare to FacebookShare to Pinterest
What the... CDs, Rock