Well, Unhappy Friday the 13th! Being a horror fiend it's obligatory for us all to post on this splendidly unfortunate day. Well, I've got bad news and bad news... and worser news too. There are three Friday the 13th's in the year 2012. So expect two more of these special occasions in the next near few months (April and July to be exact) from all the insane bloggers. I did one two years ago, skipped the one last year (due to blacking out and waking up butt-ass-naked in a field full of dismembered and bloody sheep guts) and wasn't planning anything for this one... but one idea blended with an older idea now brings you: screenshots of my Favorite Horror Deaths! Part 1.

Let's keep it short and sweet. The film is Jason X. The year was 2001. The film is AKA Friday the 13th Part 10, aka JaXon. Maybe I made that last one up. Kristi Angus (whom I mistook for Bridgette Wilson for years even though I've only seen her in this) plays Adrienne, a totally hot as all hell sexy scientist bitch aboard a spacecraft, and about to regenerate a previously cryogenically frozen Jason Voorhees. What luck. Little does she or anyone else know, this motherfucker ain't dead! While Jason lays there on the operating table, two of the spaceship's other occupants begin to have naughty naughty sex, and he begins to thaw. Unbeknownst to the girl in the room with him, of course. Let's break this one down old-school style (no vid, just pics):

Alright, Casanerda is up there with his ultra-sexy android g/f touching her lick-n-stick nipple while two of the other yung-dumb-n-fulla-cumsters are licking belly-buttons and moaning like softcore professionals. Jason starts to twitch at every moan and groan, eventually clenching his fist in extreme anger! [Note: I've never seen a fist being closed convey so much emotion, and I'm like, totally dead serious.] 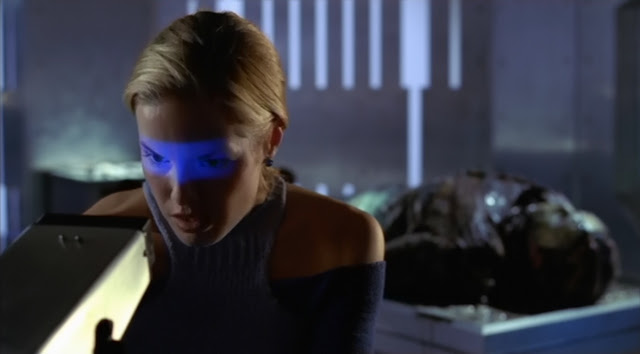 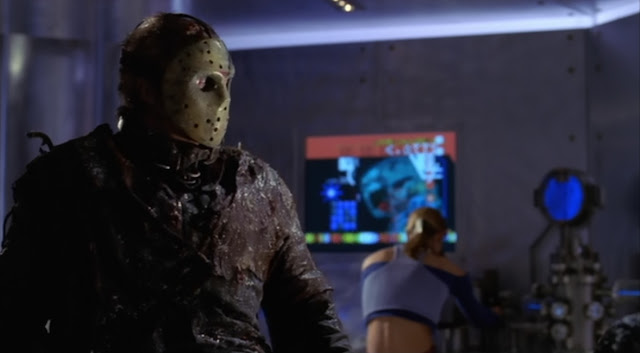 As the girl upstairs in the Orgasm Corridor squirts her futuristic love juice, Jason suddenly wakes the fuck up! And what does he smell? Well I don't know, but this chick probably smells pretty damn good. And judging by how snobby she was about her work earlier, she may just be on the rag. So let's just assume that she smells pretty DAMN good! 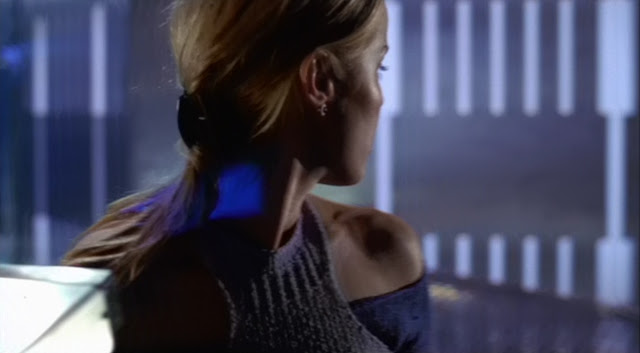 She hears a strange noise and turns around only to find her Specialman missing his link. That's strange... then suddenly, without warning: 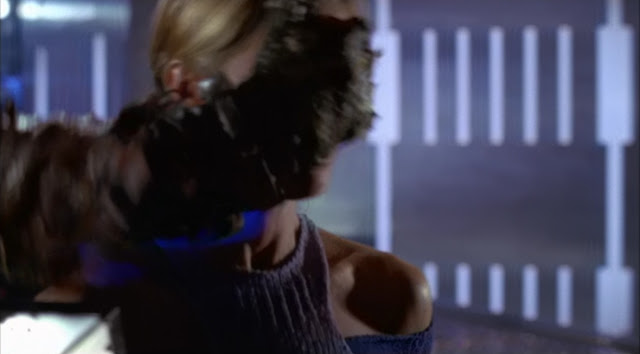 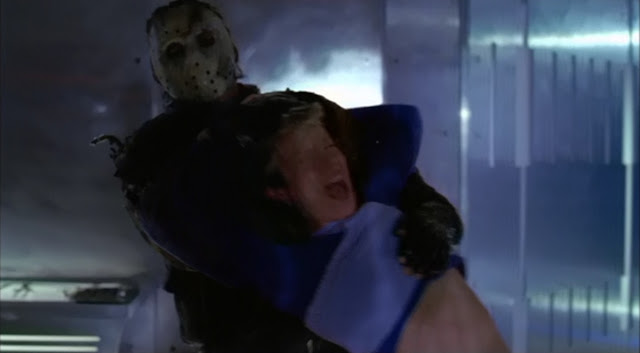 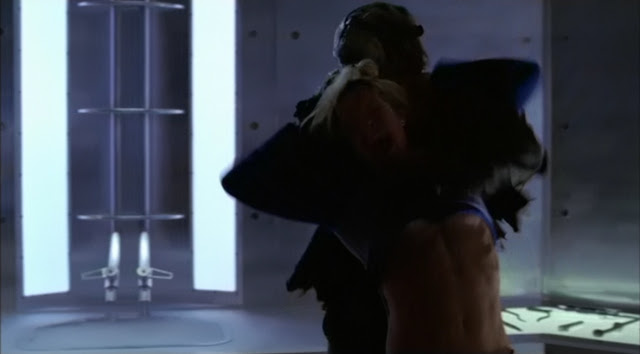 Jason drags this up-n-cummin' deadster by the hair, slowly pulling up her tube-top slut-gear while he does so, (almost) exposing some sweet mammary glandage. But we all know Jason doesn't want to see that shit. He just wants to see DEAD! 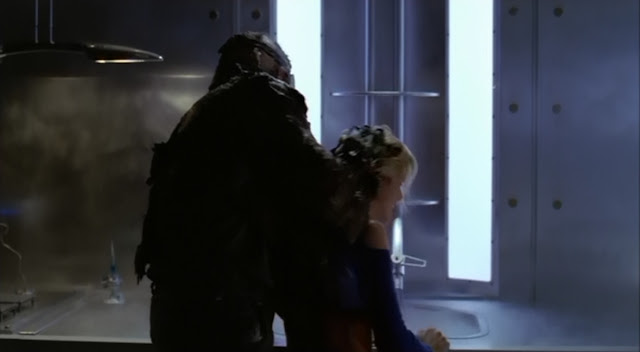 "No no no please don't stuff my face into the unprotected, uncovered and totally unsafe futuristic freezing agent station!" 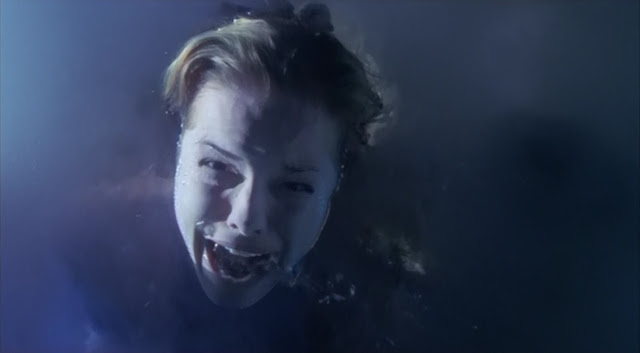 So Jason proceeds to stuff her face into the unprotected, uncovered and totally unsafe futuristic freezing agent station. Thereby freezing her pretty face in a matter of seconds!

Jason pulls her head out of the insta-freeze liquid, looks at the bitch, and then furiously smashes her head down upon the table with a fury of a thousand OG's yellin out "Domino MuthaFucka!" 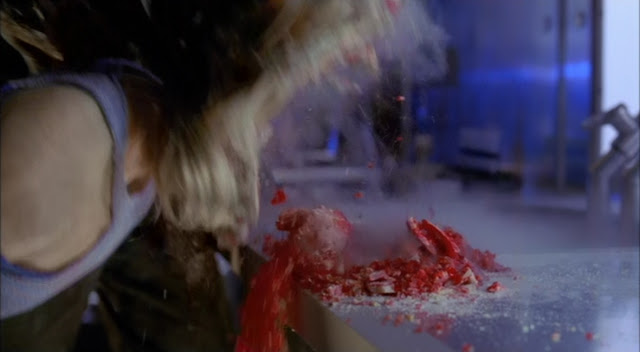 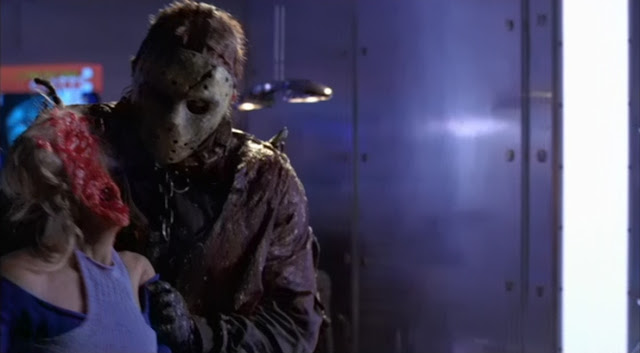 And that's Splat. From the very first time I watched Jason X, this has and is will be always been one of my favorite death scenes. Everything from the set-up, to the beautiful girl, to her clothing (so hot!), to the Rage that Jason shows, to the way that he completely manhandled her (almost ripping that shirt right off her), to the graphic and well done Gore, to the totally brutal way he just throws her down to the ground when he's done. That's the clincher. He fuckin' drops her, like, GTFO... only no TITS.

Too many internet references.
Laid to Unrest by DrunkethWizerd

Email ThisBlogThis!Share to TwitterShare to FacebookShare to Pinterest
What the... Babes, Favorite Horror Deaths, Friday the 13th, Horror, Movies, Screenshots

I still don't have Jason X in my collection, and I'm not sure why. It's not particularly good nor does the premise make much sense, but it is a hell of a lot of fun. And this scene is a pretty good reason to own it. I'm hoping for a Blu-Ray someday, because I feel that the only way to view future Jason is in HD.

And yeah, I totally dropped the ball on the whole Friday the 13th post. Maybe in April.

Great death scene in a kinda cool entry in the series (let's be honest, hate on the robo-Jason at the end or not, this series did a lot worse than this entry). I think the sleeping bag death scene tops it though, and Jason's best kill has to be the boxing death in Part 8. Has to be my favorite horror kill of all time.

PS. Really dig the idea behind this one - looking forward to more screenshots of some cool kills.

Hell yes! One of my favorites as well. Really the best part of the entire movie...

Love the blog. I'll be following your beer and horror adventures!

As mediocre as Jason X is, but this kill is just badass. Kudos Jason!