Here's a piece of art that I did around the end of last year, guess I'll call 'im ChickenScratchFace (2010). 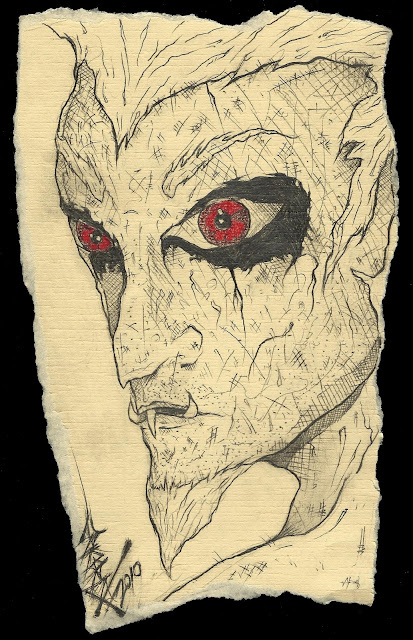 Looks like a variant of that Vampire Beavis that I did. Don't know what was in my brain. I had been looking through my book of business card sample paper which my father (RIP) gave me, and I found that I'd been using a lot of the transparent and light-white paper to work with (it's so beautiful). Drinking heavily (here it comes) one day, I thought to myself: "I always ignore this yellow paper. 'Cuz it suckz'. So ya know, fuck it, I'm gonna use it and do some shit!" I said it out loud and even responded to myself... but hey, mission accomplished huh? One down, and I hope I don't fuck up the rest of the paper that I've ignored. Because there were some beautiful slices of tree that I had to throw out since I'm such a thrashed artiste.
No matter. I had fun with this one, partly because I was buzzed as shit, but I just kept scratching away. I colored the eyes with a few different red pencils for fun. Goes to show, I guess, that you should respect your paper! Or just be awesome 35/8, because I have thrown out gorgeous paper with shit art too many times. I'm not modest. This one was saved from the trash bin, almost twice. Maybe someone will like it and that sweeet love is gonna save me. If  none of that made sense then don't worry... but somebody is going to like this, even if everyone else on earth hates it! That is the the Artist's way.
So those motherfuckers can go suck a fat left ball. ;)
Laid to Unrest by DrunkethWizerd

Email ThisBlogThis!Share to TwitterShare to FacebookShare to Pinterest
What the... Artwork, Vampires