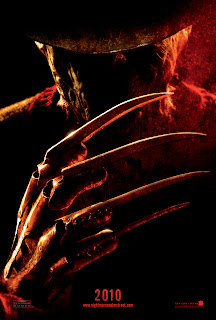 Horror bloggers were pissed, calling this an utter shitfest and proclaiming it the WURST THING EVUR! After second viewings, wouldn't you know, some hated it even more. How could they do this to our beloved Freddy? Everyone's favorite teen murdering, wise cracking jokester. How dare they go and make him Sinister again! Wait... that's not such a bad thing, innit? Freddy has always been my favorite slasher and A Nightmare on Elm Street is 10/10 always being in my top ten films of all time. But let's face the fuckin' facts here... Freddy's Dead was a major low point for the character. You really can't fuck things up worse than they did there. This is the way I look at things: Freddy was at his most true during the original, New Nightmare and to a slightly lesser extent, Part 3. Sure, I dig Fred when he puts those sunglasses on at the beach and calls Ricky a little meatball, that's all well and good. But I like my Freddy to be mean, nasty and a sick fucker. This remake did that. 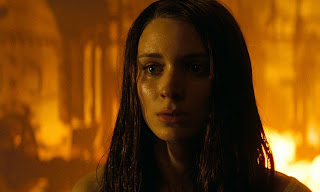 I'm not going to go off the deep end and praise this film as being some major accomplishment for the horror genre, no. But do I feel that it's a bit under-appreciated, and that a few of the more harsh comments that have been slung its way are undeserved? You're damn right I do. I can see all the faults, and I can address the concerns of many as I too feel dissapointment in some areas. Just a few: The glove coming out of the bathtub between Nancy's legs. It had to be done for the sake of the remake, everyone knows it. Did it have the same effect as the original? Fuck no. If it hadn't been included in the remake, would people have complained? I sure think so. That's the trouble with this exciting scene of the past, the filmmakers this time around are screwed either way. Sad they couldn't think of a way to improve the original scene, and decided to just carbon copy it. After all, they didn't have Freddy's tongue coming out of a phone and that didn't matter much. In fact, when Freddy says that he's "Nancy's boyfriend now" in the remake, it's a lot more personal. And I'll get to that in a second.

They did this blurry edges effect for quite a bit of the dream sequence stuff and that irritated me. The dream isn't supposed to be noticeable (and some of it wasn't), but I guess this is happening when it's all micro-naps or on the edge of waking or falling asleep. Still, I don't like it. A lot of the children from their preschool are now dead and Nancy finds out about this online. That was annoying [it's not even off screen death, it's like off screen death hearsay], but I can see why they did it (for the storyline). At least they had the sense to put Marcus Yeon's vlog up there to give this part of the movie a moment of interest, if you can call it that. I at least like Yoo better than fuckin' Joy Division boy up there with his little awkward pouts and shit. What in the fuck that was the same character from Jennifer's Body. [Side note: Kinda like how Trent from the F13 remake was the exact same dude from the first Transformers film - Bay's influence, much? Yeah, and Aaron Yoo has now been killed by both Freddy and Jason (though when Jason killed him it was very Michael Myers and in the NoES remake he didn't so much die off screen as... in screen? Muhwaha! I'm rambling.)] So parts of it sucked, but let's take a moment to see what really works.

Freddy is a sick motherfucker, for one. That's what works. His relationship with Nancy here is taken to extreme, complicated and downright vile complexities. He may have loved kids, but he fuckin' loved Nancy the mostest! It's not made clear what he had "done" to the other children, or exactly how "far" he had gone with Nancy, but it is alluded to that he did bad things with her that he didn't do with the others. When she's taken from him he comes back from hell to get her back, much like Hellboy would have done for Liz. Though, I can't really see that big mitt making scratch marks on the young lass, simply pulverizing. And even then it's a fucked up thought to begin with. One of my Japanese followers is drawing up a Manga of this as.. of.. now! So he comes back for His Little Nancy and to get to her, what does he do? He kills all of her former schoolmates in grizzly fashion to get her attention, making sure that he leaves her for last, that she'll never wake up from a coma, and he'll be forever the man of her dreams. Spoiler, it happens! 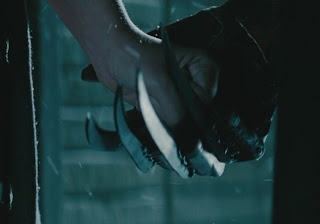 And remember how they couldn't do justice to that bathtub scene? It was something not precisely in the scene itself, but rather the follow-up. In the original Nancy was taken underwater for a short while and she struggled. That's a nice scene (especially if you get the unedited version), but here they took it in a different direction and gave deformed birth to my very favorite line of the film: Nancy is walking through the snow onto her old preschool, and Freddy approaches her from behind. This is the point where Freddy is making his move to his now grown-up little princess. Formal introductions and the whole four knives. They exchange words and then he leans in, now holding her hand with his knived glove as she squirms, and he says softly in her ear: "You smell different." And he says it in this really creepy yet utterly sexy way, and it's not only disturbing as Fuck but I'm tellin' ya I felt butterflies. Sure, I was high at the time, but I smiled. Couldn't help it. Watch the clip HERE! I like the more disturbing angle they finally had the balls to go with. It made Freddy definitely darker than all previous versions, just based on the fact that they come out and get past alluding to it. This motherfucker surfs with E.T. and Firestarter came afterwards. 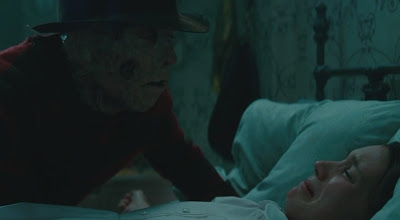 Even though I wouldn't call the script a work of genius (far from it), I feel they and JEH did a really great job on Freddy's demeanor and his words of choice. He spoke most of the time as if he were speaking to children. From "This won't hurt one little bit!", to "3...2...1... Ready or not, here I come." I feel that, on top of the other sick shit he eventually lays out, they really drove the point home and had a vision on how they wanted Freddy to appear here. The whole "wet dream" line late in the film made me somewhat cringe, since he was doing so well without the puns, but I can see how it fits now that his girl is "of age" and ready for Freddy. Also of note, his line about how the brain continues to function after death and now he's got more time to play. That was a rather brilliant contribution to this hated film, I'd say. Stuff like that gets under the skin of certain people, especially if they've seen that old Tales From the Crypt episode where the dude can feel his own autopsy. Uhg. That's an AFTERMATH I wouldn't wish for... huwaha! So I say forgive the movie for its shitty faults and look to the core of the matter. Freddy's Back!

So hide yo daughters, hide yo kids and hide yo dog cuz this mufucka's heavy-petting everybody!

Oh yeah, and one more thing. I didn't at all have a thing for Rooney Mara before this. During the production of the film and even during my initial viewing of, I found her somewhat plain and couldn't understand the attraction. After my second viewing and subsequent brainwashing, I know what it is: Those eyes. Perhaps she's got her mother's eyes. Well, I know that her character Nancy does after what transpired during the finale. ;)

I'm still hatin' the Night Of The Demons remake.

Was there at least some lipstick in the tittie? If not, then I'll not view the things.

Agreed, m'man - not a masterpiece by any means but there a lot more appreciable things in this new NoES than people gave credit for. Your review does it the justice it deserves, I think.

Watched this today for the first time and as ever I'm a bit confused on the need for a remake, especially considering the fact that the original is absolutely one of the best horror flicks ever. I think its admirable in that they sort of tried to put a new story behind Freddy, but the fact that a lot of the scenes are just carbon copies of the original is pointless. Generally I don't see much a point in viewing it, but I'll at least admit the ending eye gauging scene was cooler than a blowup doll being torn throw a door.

J.M., while a lot of the stuff is recycled, there are many subtle nuances in the film which makes it sickeningly enjoyable. Still, it's a little bland and I didn't like the whole "nightmare vision" shaky-blur cam thing. Fuck micro-nap scope.

And I myself, could have done without that emo kid in his swim speedo however.