Nerds love TeeFury (The 'Limited Edition T-Shirt, Gone in 24 Hours' Website that sells a new T-Shirt every day). That is very much fact. Also apparently fact, is that nerds run TeeFury. It seems every single morning it's nothing but a shitty new Serenity or Doctor Who shirt (most of which the designs suck majorly hard like a slut on balls). What the fuck is up with that? At first it wasn't that bad, say like a year ago, but recently it's gotten much much worse! Still, I click that link every log on... 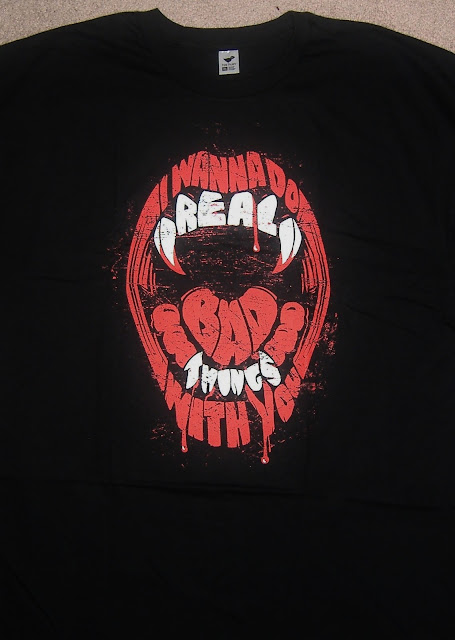 ...and despite the abundance of lameness they've been displaying as of recently, they figured doing something cool for once might pay off. And it did, with my purchase of the (pictured above) shirt that is pictured above! Rendered by a guy who calls himself zerobriant, I found the shirt design utterly delightful and purchased it on sight.

Regarding TRUEBLOOD, yeah, I dig it. Mostly because I'm desperately in teh lust with Anna Paquin! I can show you the restraining orders that have been issued. And not that it's the gap between her two front teeth there, but god damn does that drive me into a stalking frenzy of unknown jerk-off despair. Hell, she's the only reason I even care about watching those horrible X-Men movies. Let alone that guilty pleasure known as Fly Away Home.

I don't recall an episode from either Series 1 or 2, where Bill was fucking Sookie, and they were really going at it ya know... well, I was watching it for the first time, and I was screaming at my set, "Bite Her! Bite Her you Fuck!" Guess I was sick of the teenage wasteland of tension that Twilight inflicted upon me, and then what do you know, he fucking bites her while fucking her! And I screamed like a little bitch. That was hot as hell. Damn straight.

Completely agree about the Dr. Who and Serenity/Firefly shirts. One every now and then is ok, I'm actually a Firefly fan, but damn what happened to all the other cool shit they used to print?