WHAT'S GOIN' ON: I'm sure a lot of crazy shit went down during San Fransisco Beer Week (February 10th through the 19th) - a smorgasbord of events all up and down the Bay Area for beer lovers and pretentious beer nerds alike - but you know, I didn't really hear too much about it. Sure, I'm out of the loop! I wasn't even there at the time, but I wish I was. And hell, who's to say that people can even remember what happened that week with all the booze that was consumed? Not many would be my guess. Aside from a few small circles probably... oh, and of course, if your establishment was throwing a tasting competition where gold medals are handed out and placed around bottle necks! That shit is as serious as a rape scene with Dakota Fanning.

A lot of people were buzzed on the night of February 11'th In Hayward, California at The Bistro (Home of Extreme Beer and Live Music), but it wasn't until a little later, when the word spread of their 12'th Annual DIPA Festival Gold Medal Winner, that a larger buzz would rage, (and not only) online! Beating out 42 other Double IPAs, including Pliny The Elder (Silver) and Ruination (Bronze), was the newcomer to the group: Hoptologist. I got back down to California at the end of June after a moving to the dead end of the new earth, long after these festivities had ended, and the madness was just the starting to heavily build at this point. Being from the area all my life, but just a kid and too young and into love and other drugs, I had never actually tried Pliny. So after getting caught up in "the scene", I naturally wanted some.

By this time, the clerks at Total Wine and More seemed to be pretty fed up and/or apathetic with all the Pliny whores (That was the vibe I got, and I wasn't trying to be one - I just wanted a single bottle if possible), so they were quick to pimp out Hoptologist to the fullest. Knee Deep just released a 'Gold Medal Winning' poster (displayed very apparently) to go along with it, and they were very supportive of it. I of course got my hands on a few bottles of Pliny, and after I drank my bottle of Hoptologist, I went right back to BevMo! and bought another one to bring home with me. When I got back home and once again had access to the web, I read up on both of these brews a little more just for my own personal enjoyment and more so, to see what people had to say about Hoptologist. I've already heard enough about Pliny to know that people are all over it, just like my sperm on a photoshopped nude of Saoirse Ronan. 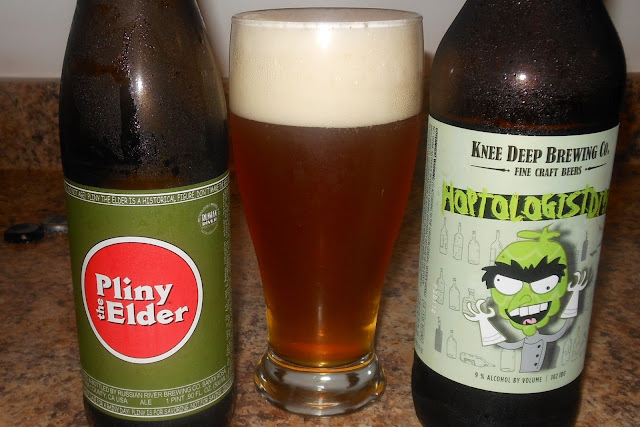 But I digress! When I started reading reviews of Hoptologist, what I noticed was that people were just going on 'certain sites' rating it and talking mad shit! Unwarranted shit, mind you. They weren't even really reviews either, and most of the people who wrote them seemed as if they didn't even drink the f'n beer. "I can't believe this beat Pliny, I give it a 1" or "Pliny 4 Lyfe! hoptolgish suxxsz..", and so on. It was some childish bullshit and I must of course scoff at it. I understand fanboy-ism, and I understand favoritism, and I understand territorial pissing... but I've never really been one to understand stupidity and general annoyance. Can I deal with it? That's a different discussion. People like to separate things so much. "This one's better than that one." "That one's better than this one." And so on. Well... fuck everybody who does that, because I AM MIXING THIS SHIT TOGETHER! Just for the hell of it. Not to piss anyone off either (much like Dr. Blood, I could care less about the abhorring, diseased, simple-minded and stinky people of Wal-Mart, which are quite frankly, below me - and I quote). I was going to drink them both the same night anyways, so I figured, why the beer knot?!

HOW IT WENT DOWN: Both of these similar looking brews formed a clear, pumpkin shade of orange and it had a long lasting bubbly huge head atop of it.

While both of these beers smell incredible on their own, and (as expected) together as well, it's also pretty awesome when they're mixed. Smells a bit like Torpedo actually. Hey, I could have bought a whole shitload of Torpedo for a fraction of the price of this and it would have been all good. Pay no attention to the man behind the pint glass! Hoptologist has a bit more of a creamy candy-like smell, while Pliny has more of a prickly and piney. They mix together quite well.

I guess similar's attract too. This combo starts off with a fluffy cloud inside the mouth that rapidly expands and explodes. There's extremely peppery caramel, a haze of strong booze and leafy, piney hops burst all over. It's bitter, bittersweet and a bit stinging. There's not much more to it than that aside from the subtle fruitiness. Just two righteous DIPA's mingling together. Nothing to see here!

Lot of foam on the mouth first off. It settles down eventually... like two beers at war, eventually making peace. Perhaps mankind, and idiots aspiring to become some kind of man, should take note. So how did I feel overall about the whole thing? Well, it felt good in spirit. Would I have been just as happy to walk down the block and grab a Southern Tier Gemini and mix it with a Sierra Nevada Torpedo? The answer is yes. But then again, the Hops fell off before these beers were even bottled right? ...so well, fuck it.