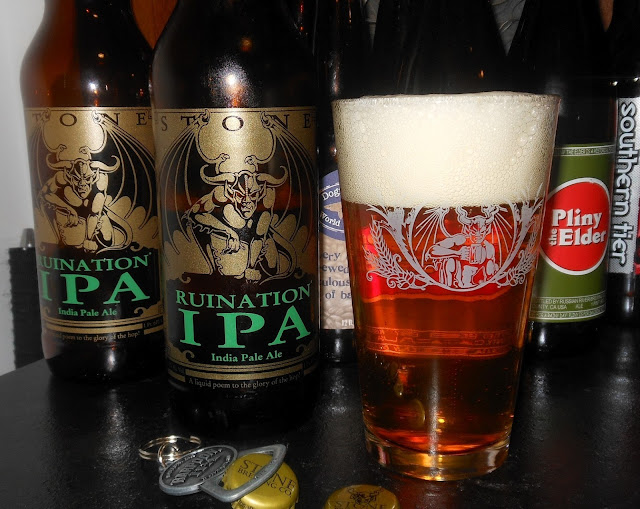 About: "So called because of the "ruinous" effect on your palate! This massive hop monster has a wonderfully delicious and intensely bitter flavor on a refreshing malt base. One taste and you can easily see why we call this brew "a liquid poem to the glory of the hop!" Those who seek, crave and rejoice in beers with big, bold, bitter character will find true nirvana in Stone Ruination IPA! Hops: Columbus and Centennial."

Thoughts: Ruin poured an incredibly clear, yellowish-amber orange. There are a lot of carbonation bubbles rising up, and the head seemed to last nearly forever.

Scent is strong, hop forward, especially during the pour. Citrus tones, lots of mellow pine, candy coated hops, grapefruit and lemon zest. It's got a pretty good balance to it. The malt is definately there, though not really over the top, and the hops really get to shine through. Smells like an inviting trap.

Taste is a little sweet, very peppery, and it's got bite! There's a snap to it - a nice piney hop kick after the swallow... Loads of bitterness follows. And an enjoyable caramel malt backup that's not too sweet as well. This one has a major hop flow from beginning to end and though it's got a decent balance, the hops do not hide from scent to taste to finish.


Mouth feel is pretty creamy. It's got a really sublime and gentle foam to it and isn't heavy at all.

While I like how sweet and spicy this one is, there seems to be something missing. It's got a nice flavor to it, but it just didn't blow me away. I'm not looking for a "nice" flavor. Rather, I want extreme up-front blast bursts of orgasmic liquid pulses (Southern Tier anyone?).

Since I had an old bottle of this sitting around, I decided to go out and grab another so I could pair the two and reflect a bit. Though the aged IPA was only a month over the best by date, it was noticeably different. The beer itself was muted and not as crisp, but still drinkable... however, the look of the brew was the most startling. The old Ruination was cloudy as fuck! These two beers side by side looked nothing at all like each other when I poured them in the glasses. I'll continue to purchase Stone beers that I have yet to try, and review them, and who knows, maybe I'll buy another bottle of this one sometime in the future. But I doubt that if I'm looking at this side by side with SN Torpedo that I'd pick up a bottle, rather instead opting to grab a couple of the superior for the same price.

Email ThisBlogThis!Share to TwitterShare to FacebookShare to Pinterest
What the... California Beer, Double IPA, Stone