About: "Visitors to Smuttynose Island, peering across the dark waters of Gosport Harbor towards the ragged rocks of neighboring Star Island, are sometimes startled by the fleeting sight of mysterious, alluring creatures swept up from the Atlantic’s cold, inky depths. Or so they tell us. 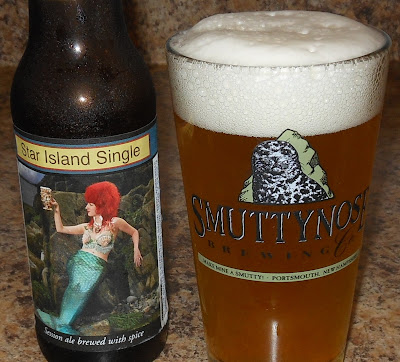 Thoughts: SIS poured an extremely light yellowish amber and featured a full and bubbly one and a half finger white head. The beer is a complete blurry haze and there's about one or two carbonation bubbles rising up every few seconds.

The scent is of a mix of spices and malt and not really much else. It's hard to pick anything up actually as the scent is so incredibly light. It smells a bit like rye bread to me, but then again not really.

The taste is slightly heavier than the scent, and tastes of the scent itself. This must be brewed with the lightest Belgian yeast in the world. Something about the taste of this isn't sitting well with me... it gets very chalky and almost soapy, and never goes through any other transition so that's it to the beer? It's slightly sour, a little bit peppery and it's got like a clouded, muted tang to it. Aside from that the taste is pretty light and not all that exciting. Not horrible by any means, but I was not feelin' it.

I feel dried out about halfway through the bottle. The beer is a little thin and watered down feeling.

I sampled about five of their beers and decided on this one and don't really know if it was the right chioice. I really should have gotten their seasonal for the sake of having a seasonal or even their regular IPA. Perhaps I should just stay away from anything that's got the words "Session Ale" in it, or hell, any beer with an ABV that dips below 5%... or as I like to call them, "light beers!" At least the Rep was cute and fun to talk to for a little while though. The next Smutty I go for will no doubt be one from their Big Beer series (though I'm not sure how I'd really feel about drinking a beer with happy faced Sperms all over the label).