About: "The Sculpin is a testament to our humble beginnings as Home Brew Mart. It showcases bright flavors and aromas of apricot, peach, mango and lemon. The lighter body also brings out the crispness of the hops. This delicious Ballast Point Ale won a gold medal at the World Beer Cup 2010 in the International Pale Ale category. The Sculpin fish has poisonous spikes on it’s fins that can give a strong sting. Ironically, the meat from a Sculpin is considered some of the tastiest. Something that has a sting but tastes great, sounds like a Ballast Point India Pale Ale." 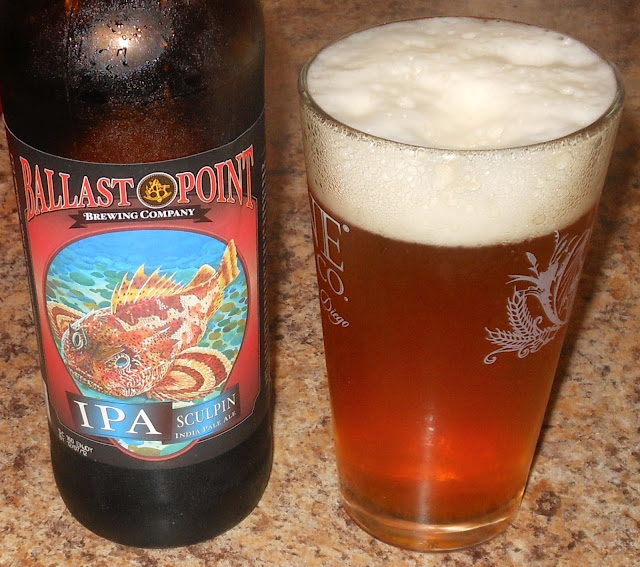 Thoughts: Looks as if the liquor store down the street just got a brand new shipment of incredibly fresh Sculpin! Not a big deal I guess as they just shelved a row on the top where it's pretty much invisible and a row near the bottom next to the Southern Tier stuff (no other Ballast Point brews in the place as this stuff doesn't come around often and obviously they don't order huge amounts of it). Just so happens though that this one is the one I was looking for... so uh, fuck yeah.

The top popped off this one very invitingly, as if it just erupted and had been waiting to be drank. The color is a yellowish-auburn with shades of orange. It's lighter than expected. The white head dissipated at a somewhat quick pace, but it was a big sucker. The beer looks really clear and there's minimal carbonation rising up.

Smell is amazing. Very resiny and up front. Loads of hop profile in this one, and a very sweet malt backup that accentuates the piney scent perfectly. There's an utterly sweet citrus tone throughout the whole thing too, permeating with mango and grapefruit. Very much like a tropical fruit juice mix. Pineapples in pear juice.

First sip and I can feel a prickling on my tongue followed by an initial rush of bitterness. It's very piney, but an earthty and leafy type pine. It's got a semi-sweet biscuity type background to it. It's leaves a bit of a smoky haze after each gulp, and overall it's got a floral vibe to it. This is some pretty strong stuff. Like liquid concentrated hop oil. Not the best balance I've tasted, but it's pretty close. There's a very light caramel in there. Strangely enough, I'm getting a buttery sensation while a fourth of the way through the bottle... and I started sneezing.

Mouth is pretty creamy. And oily. This stuff coats the mouth and doesn't let up.

As it warms up and you get used to it, the bitterness mellows out a bit becomes a more flavorful and slightly sweeter beer. Like dipping half of a grapefruit onto a plate of sugar. Strange camoflauge lacing on the glass with this one. Never seen that before. Alright, pouring the rest of the bottle: no change in appearance. Digging the scent all over again. The buttery tone faded out once I poured the rest of the cold brew back in the glass. It's still a bit peppery, prickling, slightly hazy, and a tad tart from that zest peel.

This is a pretty damn good IPA, especially if you're down with the bitterness, but nothing in this world will beat out Torpedo for the maximum flavor / price ratio. What in the hell is with the price on this one?! Jeez. It was just put on the shelf so they didn't have the stickers up yet, not that I really cared to ask anyways since I just wanted it... but eleven bucks? Dogfish Head Fort is on my list, and even being such a super high ABV brew (which makes the price somewhat understandable), it's got my wallet crying at the fifteen dollar price tag (and that's a 25.4 oz bottle).

Email ThisBlogThis!Share to TwitterShare to FacebookShare to Pinterest
What the... Ballast Point, California Beer, Double IPA

Sculpin is one of my favorite IPAs. If you find it on tap, definitely give it a try. I don't recall it being so expensive here, but that could be because the distributor by me has been pushing Ballast Point beers for the past year or two. I know I bought a growler of it for $15 earlier this year.