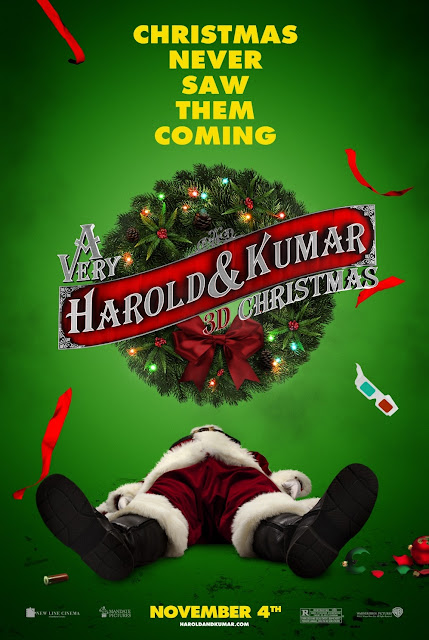 
Six Years after Harold and Kumar escaped from Guantanamo Bay, the two have drastically grown apart. Harold (John Cho) is more than happily married with Maria (the incredibly hot Paula Garcé) while Kumar (Kal Penn) has been left by Vanessa (Danneel Ackles) and does nothing but sit around his dirty apartment smoking weed and watching television (in today's case: A Christmas Story). When a mysterious package addressed to Harold arrives at Kumar's place, the two are reunited and Maria's father's prized Christmas tree gets inexplicably burnt down. So ensues another wacky adventure of miss-mashed events while the two go searching for a replacement tree.

I loved Harold and Kumar go to White Castle. Let me just get that out of the way. There were so many great scenes: the two of them whispering in Freakshow's truck, the Burger Shack employee talking about the secret sauce, the way they laugh during that PSA spoof, I got to see Malin Ackerman topless, Ali Larter and Rachel Nichols got it on in a nasty wet lesbian scene (wait, no... my mistake, that's just what I wanted this year for Christmas!), the animated burger land sequence that ends in Kumar licking Harold's face, the chubby extreme-velociraptor punk, the rabid raccoon, ect. The dialogue was all good and none of it seemed awkward aside from the "fuck it" kissing scene at the end. And it wasn't trying too hard (maybe the BattleShits scene). Then the sequel came and for half of it I just couldn't give a shit. I wasn't really into that whole "Hunting the terrorists" plot and I don't really care too much for Rob Corrdry. Those scenes were more of an annoyance to me, as was smoking with George W. I did like the John Reep scene about "whooping your little cyclops ass!", and the KKK stuff, the bottomless party, the more gentler scenes about Kumar's past smoking weed with Vanessa.

But the problem arises with the film trying too hard to be obscenely gross or super funny, when it shouldn't, and isn't. The same thing goes for the third film, Harold and Kumar Christmas. They went way overboard with the Neil Patrick Harris stuff, first of all. He's like in one-third of the total film, it's ridiculous. I didn't need to see him do an entire song and dance routine in 3-D. He was good in the first film, and even OK in the second, but this was too fuckin' much. Harold and Kumar both have new best friends in this one (played by Thomas Lennon and Amir Blumenfeld) and thankfully their scenes aren't nearly as annoying as the side scenes from part two involving the Government. I liked the running gag with the baby girl that keeps getting fucked up on various drugs.

There's a really awesome Claymation scene where the two are seriously tripping out on spiked egg nog and have to escape a giant, sinister snow man that's destroying the city. We even get our first shot of genitals here (Kumar's humongous 3-D clay dick in your face!). It keeps coming back to reality and showing how insane they're acting even though to them they're in a clay world and some crazy shit is going down. Then there's a little nod to A Christmas Story later on when Harold gets his dick stuck to a pole and Kumar decides that only his warm saliva can get it unstuck. "No! I don't want you spitting on my penis!" Aside from the more penisy scenes, we do get to (not) see NPH jerking off on a model's back while he gives her a massage, and a really nice ass shot from Maria (one which rivals the ass shot in Immortals). Nice! 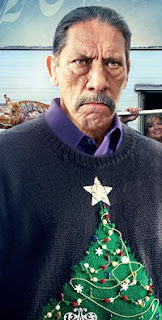 Paula Garcé as Maria, who is perhaps the sexiest woman alive, gets a few more scenes this time around which I enjoyed. She's drop fuckin' dead gorgeous. And in this one she shows off her sex-craved side. The acting seems a little forced to be ultra naughty but I didn't mind. Danny Trejo play's Maria's Christmas tree sweater wearing father who seemingly wishes to disembowel Harold. The guy is dead serious about the trees that he grows (just check out that sweater!). Patton Oswalt plays the Mall Santa who of course, sells weed on the side. Danneel Ackles as Vanessa, was hardly in this movie at all (that sucks). Elias Koteas is here (Christopher Meloni couldn't make it) playing a Mob boss who wants the boys dead in a rather lame subplot involving his virgin daughter who can't seem to get fucked. His scenes are well done, but every scene with his kids are super annoying. Richard Riehle plays the real Santa, who again of course loves smoking pot out of his candy cane bong(!). I probably don't have to tell you how awesome this guy is in whatever movie he's in. He stole all the scenes he was in, playing probably the best Santa representation I've ever seen.

My favorite part of the whole film was the Nunspoitation scene. It's so good to see hot, nude, lesbian nuns soaped up and showering together in a mainstream film these days. I really appreciate the filmmakers for giving the nun-lovin' viewers something special. That, and any time I got to see Maria's face (or other parts) really left me with that warm Christmas feeling inside. I can see why they had to estrange Harold and Kumar, being it a major plot point of Santa's secret package that reunites them and saves their friendship. It was weird though, seeing them so distant and uncomfortable with each other. Guess it had to be done for the sake of the story and to introduce new characters. Side characters should stay side characters though, that's how I feel about it in these films. So, I guess I'd say that Harold and Kumar Christmas was a mixed sack. It's got a lot of small doses of truly funny moments, but a lot of the puns and dialogue with the lamer characters (mob kids, black guys selling trees, and new best friends to a lesser extent) are just kind of boring and tiresome. Something that plauged the last film, but hopefully not the next.

Note: Being that this film has 3-D firmly in the title and the films itself makes extremely obvious nods that it's in 3-D, make sure you see this in a theater with decent glasses and equipment. In fact, if you're seeing 3-D films in multiple theaters around your town it's good to find out which one does it best, don't keep switching it up if you have a bad experience in one. Always go to the place that plays it best if you're going to pay extra.