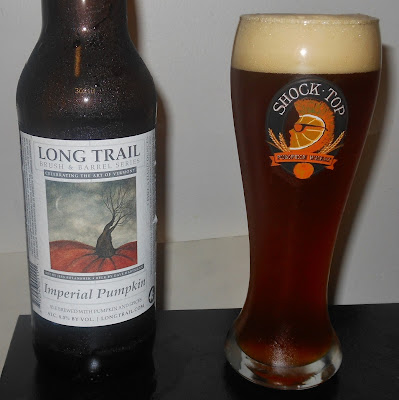 This one smells pretty uncooked. Not overly sweet scented like pumpkin pie brews, but rather like a moderately spiced mash. Kinda fruity. Smells a bit smokey around the back of it... like cigarette ash.

Major booze sting on first gulp. Tartness. Took a bigger second gulp and there's still that booze so don't consider this one well hidden by any means. It's lightly spiced, heavy on the pulpy taste and just edging on sour. The beer is extremely malty. It's got some mild cinnamon here and is pretty heavy on the clove, and with the mix of those (the drying of the cinnamon and the flavor of the clove) makes you feel as if you just smoked a clove cigarette. It all becomes nutty as you get into it, like cashews or peanuts. A very strange brew.

Mouth feel is light and airy. A little bit foamy around the end and leaves a little bit of the sticky stuff behind.

Overall I find this beer a bit more sour than I usually like. The sweetness here is pretty much non-existent and the abundance of building spice as you continue to drink doesn't really compliment the bitterness all too well. That being said, it's not horrible. There just seems to be a lot more "beer" flavor coming through as opposed to pumpkin beer... how do I phrase this? It's as if I'm drinking a beer that is in itself two different entities. While it's blended, I'm feeling more of an individual vibe from each of the flavors here. It's weird. While the flavor of this beer falls off really quick, it's got a really nice aftertaste.

Yup. Tastes like crayons. This is like the mystery at the pumpkin wax museum. The smell is definitely better than the taste... but it's not completely horrid. There's a lot of black peppery spice which I like since I like that kind of thing. It's very malty. A little bit funky and earthy. Spicy. And a tad sour.

The new artwork got me this time around, as did the whole thought of revisiting pumpkin ales, but I'm not really much of a fan of this one overall. Totally way better label for 2013 though.