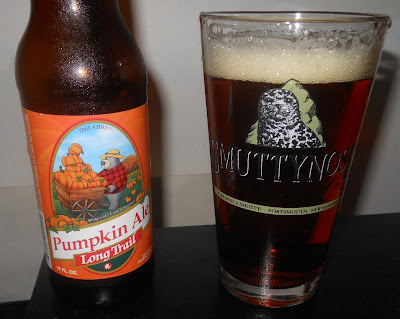 Thoughts: Poured a very rich orange orange color with an off white head that popped like crazy until it remained only a puddle of foam in the middle and edging the glass. Carbonation seems low and the beer is slightly cloudy.

The first whiff I got off this was incredible. Very sweet and inviting. Next few sniffs and it got slightly more harsh. There's a good amount of spice in the nose, and a peppery tone that comes through after a short while. It's seemingly smokey.

Taste starts out pretty bitter, followed by a gentle tingling of cinnamon and a slow flow of the allspice / nutmeg mix. Second gulp is very peppery, smokey and of course there's a heavy malt base present. It's decent. Not really sour, not really sweet... it's mild, got a gentle bitterness, and doesn't taste overly cloved. It's pretty good.

It's pretty crisp and clean feeling. Aftertaste is soft and smooth.

For what it is, I think I may actually like this more than their Imperial Pumpkin... strange. That never happens. It's a bit more watery than I'd prefer, and of course overall it's got a mild taste to it. But it's not too bad. In the case of both Pumpkin Ales from Long Trail, the scent is more appealing than the actual taste. I'm the sort of guy that likes "in your face" beers when it comes to taste though. These ones had a strangely unique taste to them too, which I imagine must be from the state they're brewed in.

Email ThisBlogThis!Share to TwitterShare to FacebookShare to Pinterest
What the... Long Trail, Pumpkin Beer