What?! Stone Cold ET, wants to celebrate Halloween... three days late... and drink himself, a couple Christmas beers... and that's the bottmline!!1 What!?? I said, Halloween... has come a little late, and is Nuts to Butts with this here years Christmas Season! What?!... Gimme a Hell Yeah!, if you like your pumpkins... and your mistletoe... inter-mingling, while you drink beers, kissin' each other, and plumpin up, while you whoop your bitches ass! Wait, what?!

So the town I'm currently residing in is celebrating Halloween today. I guess it's "for the kids" because the 31'st didn't fall on a weekend. That happens pretty much every year (when the unloved holiday lands on a weekday, and parents don't want to deal with shit). But now people are claiming it's been pushed back because of the storm that hit us. Yeah, sure. 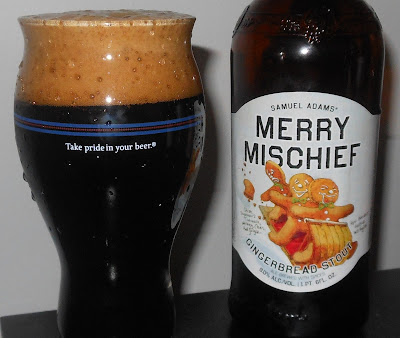 About: "This rich dark gingerbread stout entices with the aromas of the holidays, hinting at the merriment and spices within. The flavor of gingerbread comes alive beginning with the smooth sweetness and heartiness of dark roasted malts and a touch of wheat. But it’s the intensity and spices of cinnamon, clove, nutmeg, & ginger that add a wicked kick for a jolly playful brew full of merry mischief.

To bring to life the gingerbread we wanted to create that distinctive richness and spicy kick.  We strengthened the dark stout and added a touch of flaked oats for a full body and smoothness.  The dark malts also give the beer a sweet roastiness with hints of cocoa and a slight nuttiness. Then come the spices with a combination of cinnamon, nutmeg, cloves, and ginger for a layer of complexity and lingering heat. The cinnamon and clove create a peppery heat while the ginger and nutmeg create an earthiness that marries perfectly with the hops.  All of the ingredients come together to create that nostalgic taste of gingerbread for a festive and warming winter brew.

This smells just like their Fat Jack! Typical... but I'll give it a chance, since it's made with the same spices and yeast. Alright, it only smells mostly the same at first. Once you get into it there's a darker, smokier tone to it...  it's very roasty, and a mix of chocolate and coffee, though neither of those are overpowering the other. It smells pretty awesome. There's an extinguished cigarette thing going on but it's pleasant. Something weird though... are hops actually coming through? No... wait, that's booze.

Very, very malty. Tinge of alcohol. Loads of ginger and vanilla here. It's got a real alcoholic frosting type taste to it. What's this, about 600 calories or so? Yeah, sounds about right. There's a lot of flavor overall, but it does fade pretty quick on the tongue leaving a dry haze from that cinnamon and a burn from that alcohol. It's a bit roasty, burnt, heavy, warm, a little bit acidic, heavily spiced and pretty much a dropped bomb. I don't hate it, no... in fact, while I'm not overly fond of it, I do happen to enjoy it quite a bit. Just because it reminds me so much of a Pumpkin Beer. Their Fat Jack particularly, only different.

Mouth feel is pretty thin for a stout. Watery, and such... sure it tasty for the most part. I wonder how it'll age. Perhaps in a few years it'll develop into a really nice IPA. What?! I said...

This is a cool beer. Not revolutionary by any means, and not really original, but I'm not going to sit here and complain. Most of the Sam Adams brews taste the same anyways, so at least this time they took one that I actually liked and made a Stout clone out of it. Who wouldn't have done the same thing?