Man, Demons 2 sure is one wacky flick I'll tell you what brotha. Most everyone says that it sucks, but you know, something about this movie just gives me a case of the giggles. Go ahead, just stare at that first screenshot down there for a while and then tell me you don't feel bubbly like champagne. Here's a few more weird moments from the film: 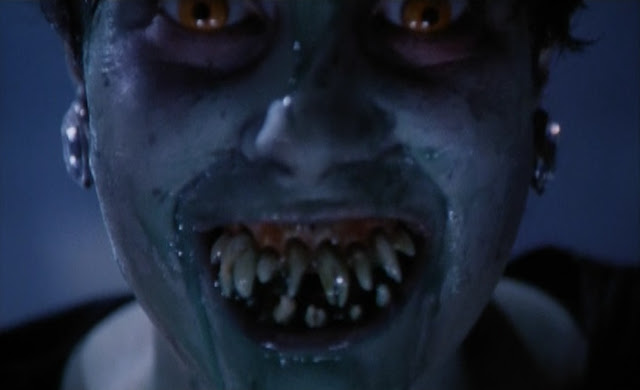 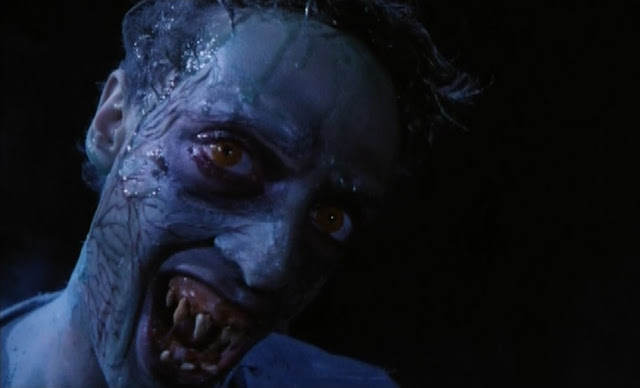 It's pretty un-fuckin'-believable the amount of times Demons stare into the camera in this movie. I always thought that was weird. Rare even. But at the same time, it's so dumb that I can't help but laugh every single time it happens! This breaking of the fourth wall was most likely not done tongue in cheek, but rather for the creepy scare factor. And while the very first time it happens (when the Demon from the television program takes that evil glance towards you) is a bit chilling, the rest of the times it's just so overly cheezy! I don't know, maybe it's because they're Smiling!! Then there's the growling, snarling  jaw writhing, teeth licking, wide ass eyes, red contacts, and extreme close-ups. Sure, it's way overdone, but I don't think I'd have it any other way. Fondue me. 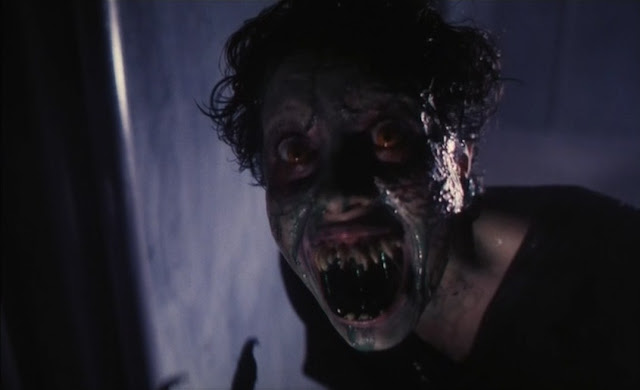 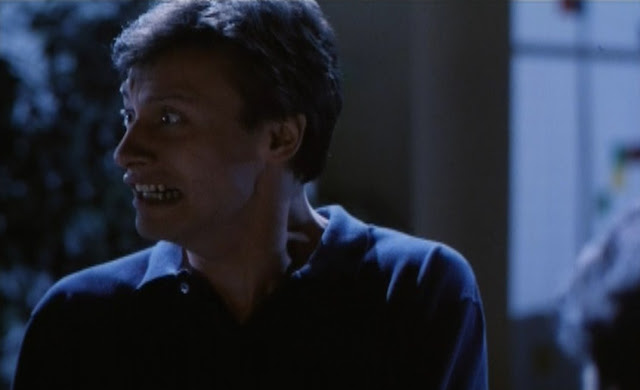 As Sally begins to transform into a Demon after blowing out her candles, she can't contain the pain any longer and needs something to clench onto. That's where this unlucky son of a bitch comes in. He's standing there next to his good friend(?) Sally, having a grand old time, enjoying the festivities and smiling away like a dumbass... when suddenly, Sally grabs him by the forearm and begins to squeeze. Now believe me you when I tell us that the look on this fucking guy's face is absolutely priceless! Hey, speaking of blowing, clenching and squee

He then lets out one of the most unintentionally funny lines in the film when he tries to get the other people's attention with a desperate and horrified "HEEEE-EYYYY!" As claws emerge from underneath Sally's fingernails and pierce into his flesh, he contorts his face and screams over and over again. Much to the delight of the viewer. I'm sure everyone was eagerly awaiting the slaughter to come after seeing this guy and Sally's other dumbshit friends fucking around with the electronics in the elevator. What are they trying to do, get themselves stuck in there for three fuckin' days or something?! Oh wait... was that foreshadowing?


So the film starts off with this mildly attractive blonde prostitute (and yeah, I'm sugarcoating that shit) entering a 'strange, mysterious and futuristic' high-rise building. How do we know that she's a prostitute? Well if you're in tune with that stuff and depending on what dub of the original Demons film you're watching, you can either "Tell 'em a mile away" or they're "fuckin' everywhere". Also, in her next scene she's disrobing and telling some suit n' tie schmuck loo-zah that they "can do it anyway [he] likes". 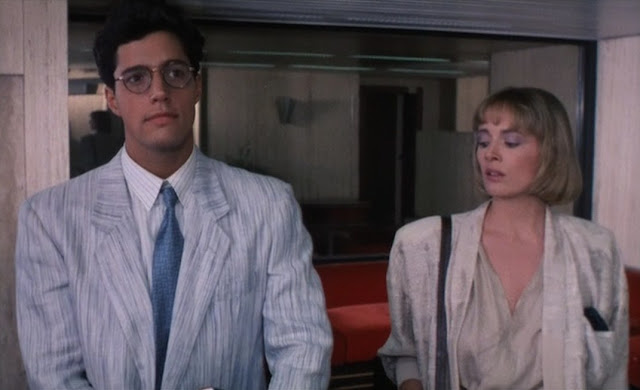 Wait, where was I? So the film starts off with this old broad with - hang on, let me search this one - a hairstyle that is referred to as "Bangs with a Bob" (think of Andrea Rau from Daughters of Darkness - except a lot less hot!) and she's about to ascend the elevator up to some middle-aged dude's room and get paid to suck and/or fuck him for three minutes. While waiting for the elevator (which is being tampered with and keeps going up and down single floors at random) a handsome bookworm nerd hero shows up aside her and waits as well. They exchange glances. In particular, she exchanges glances with his package (see above).

Five minutes later, after the deliverance of flesh, she exits the apartment and heads to the elevator once more to 'go down'. At the same time, the sensitive yet manly yet nerdy boyfriend sets out to obtain his hot pregnant wife some pickles and ice cream cake in the middle of the afternoon. Hey, it's possible. And the two of them meet up again at the elevator, and so quickly I might add! That's when the lady makes the rainbow connection:

Handsome Guy who Loves his Pregnant Wife: "Excuse me? 0_o"

Does this lady think that anyone remotely good looking must sell their ass for cash? It gets annoying, amirite beautiful people? I love these short scenes between the two here, and for one simple fact: That this bitch cannot think outside of her own box! She's so caught up in the pussy delivery business that she doesn't even see real people anymore. Simple coincidences become whatever her lifestyle favors, in her own mind. Meaning, she's one stupid, lost and empty vessel, just waiting to be penetrated by demonic forces. Hey, she's used to it. Relax.

9. Get Sally Some Midol!

Sally is having one hell of a bad birthday. Despite having tons of people over and lots of yuppie dancing going on with that shit music in the background, she still can't seem to have a good time. I wonder why. I happen to think her hair and dress look cute, but I'm into that frumpy casual-goth look so don't take my word for it. She hates it all though. Her hair is a total mess, her fucking sleeves keep moving back and forth (what the fuck is that?), her shoes are ridiculously hideous and to top it all off, some idiot just invited the guy who date raped her six months ago to her birthday party!


Oh, and did I mention that she's having her period too? 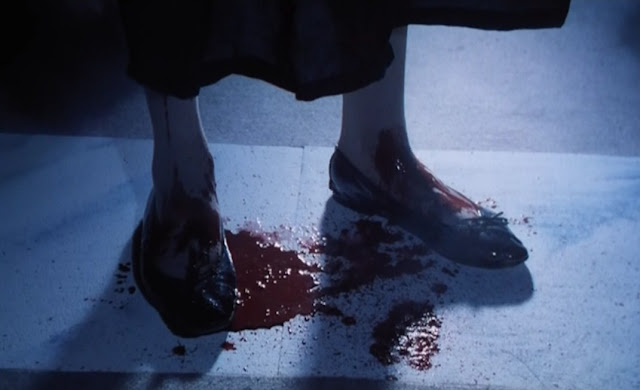 The proof is in the puddi... picture. Huh. All of a sudden I'm in the mood for a Bloody Mary. Too bad I'm all out of spicy hot V8. And why did I just get an image of Paris Hilton in a bikini eating that juicy burger and drippin' that uh-sauce all over the place? So Sally menstruates, and blood drips though the building's lower floors like acid, infecting anyone who comes in contact with it. OK, I know blood was coming out of her from the forehead down, but I've got no reason not to believe that it didn't come from everywhere. Let me have my fun won't you!? 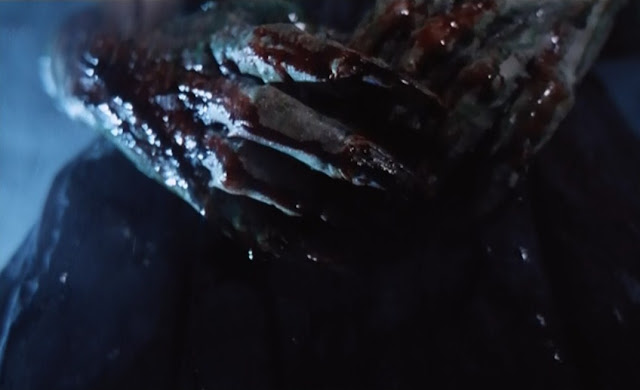 Sally and all of her stupid friends are a bunch of repugnant idiots anyways, those lame ass yuppy fucks, and I'm glad they're all Demons now. At least that's one step up from being a brainwashed zombie anyways. I'm just pissed that we didn't get to see her rip Jacob's balls off.

This furry little dog's transformation into a Hound From Hell is particularly gross, if only for the clear gooey slime as his new fangs and gums peel away from his original face skin. After the transformation is complete, the dog looks pretty silly, but when this shit is going down it is just some nasty stuff. Probably more disturbing than the new Demon Teeth that get pushed out of the humans, just for the fact that this dog's entire upper lip just peels back like that and ends up just over those glowing Demon eyes. This drunk broad watches on in sheer terror, most likely pissing herself, while she stands frozen and confused.

She notices that the dog lapped up some of Sally's vaginal excretions and in a weird (and very Demons 2-esque) fashion asks the dog: "You didn't like it... did you?!" What in the? Hey lady! Quit talking to your pets. Your demon pets. You drunk ass demon pet dog owner. Now feed your dog! Hey, stay tuned for more of the neverending tribute to Demons 2. Up next, a few of the many things that totally SUCK about the film. Be prepared.