Welcome damned readers, once again, to my blog which you have unfortunately clicked upon. I have a special treat in store for you two today: Chicks, man. I'm going to be talking about chicks that are hot, and posting pictures of said hot chicks. But not just any chicks! No, these are the girlies of Demons 2!


Let's start with a babe that in terms of sheer hotness, edges out the competition here. 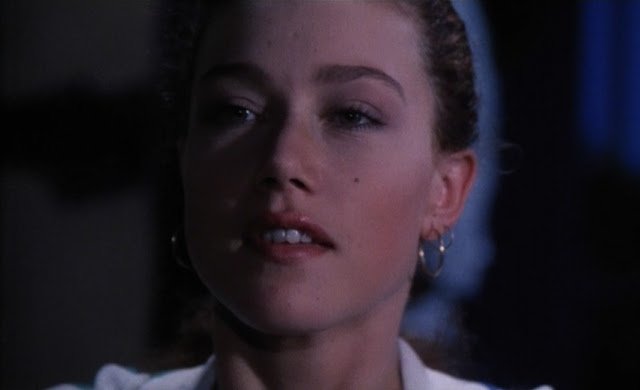 Look at her. Would you just look at her!? I want to lick her face all over, just like that creepy ass dude in the psych ward in Terminator 2 did to Sarah Conner when she was restrained. Nancy has a really exotic type of hot look about her, oh and we're in luck, she's playing a preggo in this movie. Let me poke that baby. What the fuck? This was Brilli's second screen appearance back when she was fresh and moist, before she got work done(?) and botox and all that jazz. She still looks pretty damn hot though, and I suppose as women age (especially one that's accustomed to looking this hot all the time) they get a little desperate. I'm not going to hold that against her, as I could really give a shit either way. I'm just grateful that I've got her here in Demons 2, whenever I want her.

There will be more of her to come soon enough.

Sally Sally Sally... you little Demon Wench. Speaking of Hot Italian Babes, no list of these magnificent creatures could ever be complete without the American star of the show Coralina. 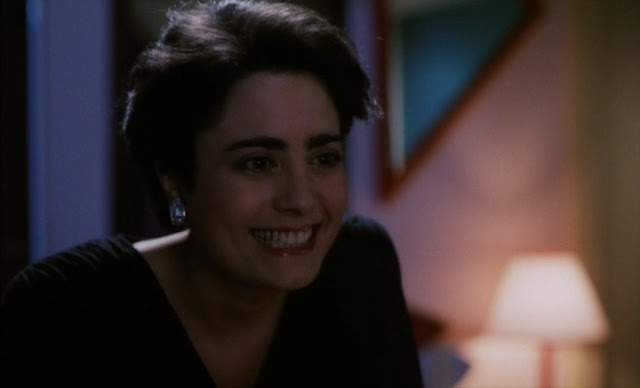 Look at those chompers! I've got something she can bite. I've always loved this chick from the first time she appeared on screen. One of the great things about being a Dario Argento and Lamberto Bava fan is you get to see this hottie in a lot of their films. She's in Dario's Opera, Phantom, and Mother of Tears, and in Lamberto's Ghost Son. Not only is she super talented at doing all sorts of things like singing, songwriting, painting, acting and dying in gruesome ways in movies, but she's also super cute.

Well, when she's not foaming at the mouth that is!

You know, it's tough for me to say which of the three women so far is the most beautiful, but I'm going to try anyways. Maria in the blue dress here is probably the hottest chick in the film. Hell, in any film. It's too bad that she didn't do any other movies really. My old VHS of this is worn out during all of her scenes. Was this chick in Dario's Opera as well? 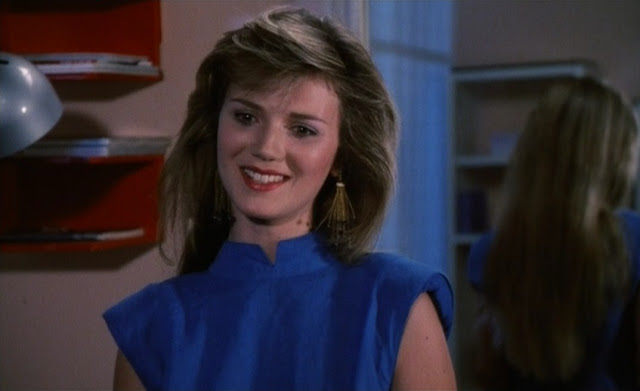 It's not her fault. None of the cameras work in this movie. 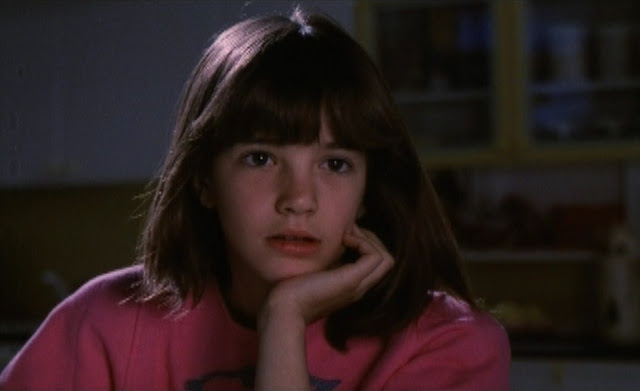 Awww. What a cutie. Future babe in the making Asia Argento made her feature film debut in this very groovy movie as Ingrid, the little girl who loves watching creepy crappy TV shows. I think it's pretty cool that her older sister was in the first film, and then she was in the sequel as well as the unofficial 3'rd Demons film: The Church. Twelve years later she even starred along side Coralina again in Dario's Phantom. A truly horrendous film of spectacular nature. Or was that a truly spectacular film of horrendous nature? No matter.

Is that a stunt double in that last shot? Nah...

She deserved it. Marina is the first casualty of the movie. Let's all give her a round of applause! Not only was this chick the one that first noticed the Demon Fingernail in the mud, but she was also the one that cut herself on accident like a dumbass, and then to top things off, let her fucking blood drip into the dormant Demon's mouth while posing for a photo. What the hell happened to this lady anyways?


This dumb broad couldn't figure out how to work this camera to save her life. 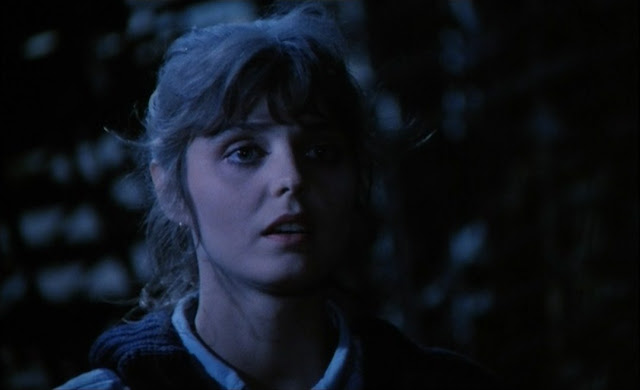 And she just keeps taking pictures no matter what, all the fucking time and it's like, super annoying... all she's set out to do is get the perfect picture! What the fuck is that shit? What happened to the slut in the tent from the first film that couldn't wait to spread and get sliced. Oh and nice sweater over the shoulder look. I thought only dudes rocked that in the Demons series. Eliana has pretty much done nothing but TV Movies since Demons and Demons 2, which is funny since she was in the TV and Movie versions of the sub-stories presented within these films. So basically she's been doing the same stuff.

This is pretty much all she does here. Lift camera up, lower camera down. 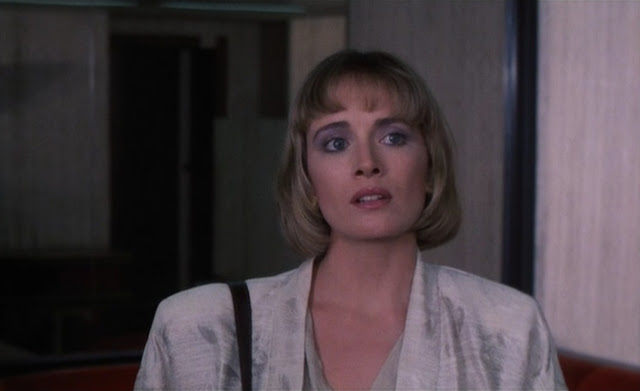 Mary The Prostitute is the second most annoying character in this movie, ranking in just under that little squeeling Demon Puppet that runs amok and gives me a headache. When this chick gets stuck in the elevator after the power goes out, she just loses her goddamn mind and whines and screams and cries the whole fucking time! It's agonizing. You'll want to reach into the television and slap this bitch, let me tell ya. She gets hers though. And something tells me that this "lady" in an over-achiever, because she climbs two shafts in this movie. Ha ha, wow. 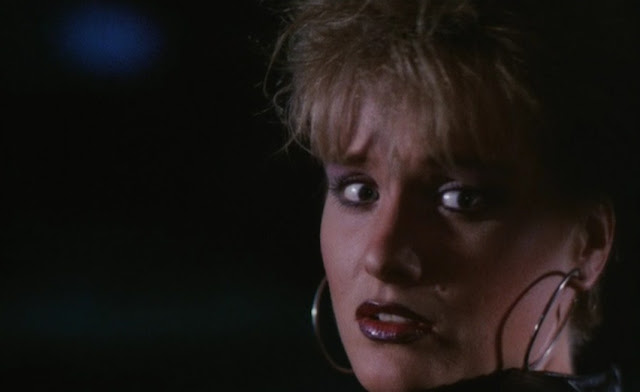 We never even learn this poor slut's name in the movie! What a damn shame. Look at those earrings, holy shit dude! Is it true what they say, the bigger the O the bigger the hoe? Yvonne makes this same face the whole time in all of her scenes. Seriously, she never changes her expression... not once. It's pretty funny. I like that look she's making too. It's pretty hot. We never really learn much about her other than she doesn't like dangerously fast cars or getting date raped. You never know until you try though, right? 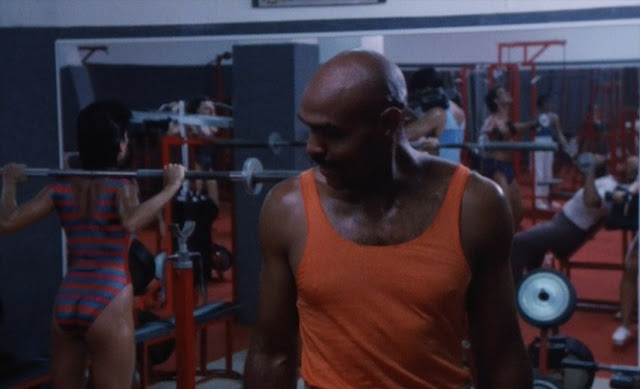 Hank the Instructor (Bobby Rhodes) gives the look of approval.

Dayum! I had no idea Demons 2 was so heavy on the babes. I'm watching this bad boy as soon as possible.

Oh, and Coralina Cataldi-Tassoni's legs are long and luxurious.