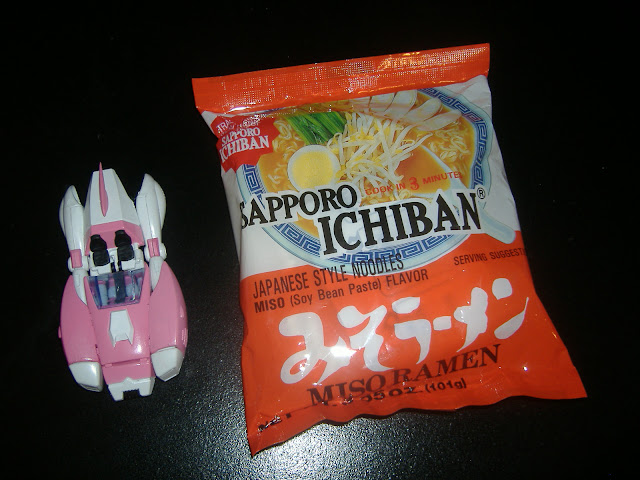 Well, I suppose the sour taste in my mouth is from the mix of rum and brew, but I'm at a strange place right now as I admire my newest acquisition. See that up there aside that single pack of Miso flavored ramen is a 3rd Party product action figure of what is obviously Transformers' Arcee, yet aka 'TRNS-01 Valkyrie' for copyright reasons. I don't see why using an exact to the point likeness wouldn't be a copyright reason, but I guess since Takara and Hasbro refuse to make the girl public, who really gives a shit? The closest that the official brand has ever come to this came earlier this year with their release of the TFAnimated Arcee. This was the very first official Arcee that was (somewhat) mass produced and actually for the first time resembled the old-school character, though with artistic differences. Even with this, many a young nerdlings longed for an Arcee figure from the film and/or 1985 television series. There were prototypes (customs?) from undisclosed locations about ten years back, and since then, Nothing!
Yeah, it happens, right? Sure it does. But why wait to put your product out when people could have been paying for it ten years ago, or even say, back in the mid 80's when the movie originally came out? I've always wanted an Arcee fig. Why? Because I like chick figs. The pinker the better. I see these test shots for an incredible G1 accurate figure online, and can only dream they make it official. But that day doesn't come, and long time pass. Other official products are painted as if they are Arcee for conventions, and the Alternator line got a bulky repaint of a Guy character which never should have seen the light of day. Then after all that, when the movie comes out, she's a motorcycle, looking like something that's been shit out of Optimus Prime's exhaust. It seemed as if there was no hope, but things are about to get expensive. ImpossibleToys just released the figure above, and Arcee fans rejoiced. For a short while, at least... 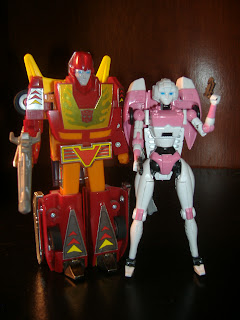 I got her and the first impression was (and I don't know if I should post the absurd picture of the huge ass shipping box this came packaged in with the little thing inside) that of shock. My eyes haven't opened that wide since I originally saw Peter Jackson's Bad Taste back in 1995. This baby is SMALL! And 70$ for her is rather big. After I opened her box up, I found out just how delicate the figure is. I'm genuinely scared to actually hold the thing. If pressure points on official figures scare you, which they should, then this thing is like that part in Indiana Jones where he's gotta replace the treasure's weight with that bad of sand. You know that face he gets when he fucks it up? Yeah, I don't wanna make that face. I could probably smash this figure into sand with a tight squeeze of my fist if I wanted to, and that's scary.
So there definitely are PROS and CONS which are immediately recognizable. Cons first, being there are no snapping-in points of the robot mold, which means that she doesn't "stay together" as well as normal figures do. You can't really position her without her chest plate rising up, which in turn raises her back junk and leaves her arms to flail. That sucks balls. Two, is that she is hard to balance considering her back weight, and yet, no ass. Which brings me to three, her waist does not move at all. Bad. The toy is also quite light. On the plus side, for one, she looks pretty damn sweet. Two, she's actually scale despite at first feeling disappointingly small. Yes, whoever designed her made it so she'd be able to stand alongside figures from 1984, and it worked out perfectly. Rather amazingly actually. This is possibly the major saving grace of the girl. Three, it just feels good to hold one of these, despite the "sour taste".
Some early purchasers complained that the paint job on theirs was rather shoddy. They may have been reviewers with free test runs, and I don't know if that's the case with many people, but the paint application on mine is Hasbro quality. Meaning it's not perfect, but it looks a lot better than on those online complaint pictures and videos. Maybe I got a "good" one, I don't know. All the joints are solid. In fact, the neck is so solid that I was afraid to move it sideways, but I did, and yes, the head actually moves. Left, right, up and down. The waist doesn't move but the hips have a ball joints and they swivel which doesn't do too much, but definitely helps. Arms are on ball joints, with a swivel and bend at the elbow but no wrist movement. She bends at the knees, ankles, and she's got two guns which are small but removable. Colors are simple pink, white, black and a transparent blue windshield. No stickers as of yet, but who knows if ReproLables will be working on some for the future.
The price is way too high for this figure, and cannot be recommended by me unless you're seriously hardcore into this sort of thing. Even then, when I hold her in my hands, it feels like she should be thirty dollars or less. I'm not exactly regretting anything yet, but a couple days after this arrived news was posted by I-Gear regarding another Not-Arcee figure: Delicate Warrior, by another 3rd Party Company is out. Sadly, it is looking far superior to this version of the figure (better head mold, little bit of a buffer bod,  more details, some Die Cast to weigh her down... but similar problems?), even though they're both based on the same custom design. If 70$ wasn't bad enough, this other one is 100$. If I had been patient, I would have got this one instead. Still may have gotten both, but probably wouldn't have been feeling mental spasms right about now. Come on with that Masterpiece figure Takara and put an end to my suffering!

I know a couple of people that got thi figure as well, just the normal release and the paint jobs were of low quality, looking quite ugly. That I gear one looks nice, but $98 is too rich for my tastes..

Yeah, I sure am in a pickle on this one.