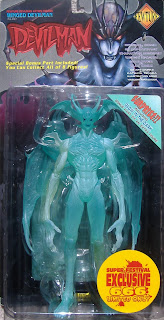 This is my Limited Edition, Super Festival 17 Event Special Version, Cold Sleep Winged Devilman... 666 of these bad boyzz supposedly exist in the world and man, is it a thing of beauty! Believe me when I tell you that it is Insanely difficult to get this figure on camera in its real color. It's a clear blue figure with white underbrushing, and if that's not hard enough to capture in what limited light I've got... I also have kept the figure in the Mint on Card bubble, making admiring the true glory of this LE figure rather tedious. Especially since the wingspan can't be displayed, and that damn camera glare ruined what non-blurry pictures I could capture. It's really 'bout time to buy a new camera since mine is from 2002 and is on its deathbed.


And it wasn't just the random desire to make a cool looking version of the toy that brought about this release. Ice plays a big part in the Devilman mythology, as it is in ice where the demons have been trapped for many years. Enslaved if you will, after a violent upheaval against humans, but not forgotten as you see, like all species have a natural enemy, Demons are the human's natural enemy. In the Manga and Anime, Akira Fudo has horrifying visions and nightmares about falling into a cold and seemingly desolate ice world. Seemingly desolate apart from the hideous demonic figures frozen in time. Beaches turn to ice as he heads over a sand dune, and Amon's glaring face.

After this release in Series 1, they gave this whole "frozen in time" thing another badass chance with Zenon (I'll get to him later) in Series 2. It was the right thing to do, and though while I do own two versions of that Zenon figure, I do not own the Blizzard Version. Just saying that while I type this means that I must someday or somehow own it. Typing that last sentence has done a swell job of pissing me off, which means that I'm probably blitzed. So uh, Enjoy the show and let's see if that Glow In The Dark shit works out for my next post. Thanks for viewing.

RE: Hey thank you!
I will post more live photos soon!

that really does look cool.. i want one!

im actually going to I-CON this weekend, maybe i'll see one and pick it up..

Your blog is fantastic...

Thanks guyz and galz.