About: Malts: 2-Row Harrington, Metcalfe, and Copeland Pine Malts, Munich, Caramel 60, Roasted Demashed Malt / Hops: Hallertau, Mittelfruh Noble Hops / Spices: Chilies from Mexico, Cocoa nibs from Ecuador, Cinnamon from Southeast Asia. "The Vixen is smooth and rich with an enticing touch of sweetness and ends with a spicy heat. For this unique brew we used carefully roasted malts and dark cocoa nibs for a full bodied and slightly sweet flavor. To this roast and chocolaty base we added an element or warmth and spice with cinnamon and chilies. Dark and alluring, the brew will keep you captivated. " 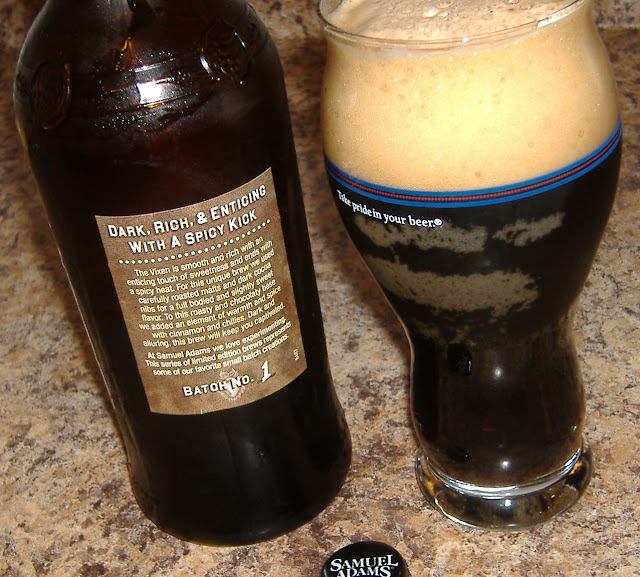 Thoughts: Poured a dark hazy brown with a frothy, bubbly tan head that lingered for a long, long time.

First smell was obviously chocolate up front, then the slightest hint of cinnamon crept in. Still a little cold and that's what I'm getting. Tasting now.

Alcohol and Cocoa. I'm letting it warm. Toasty and malty. I was really expecting this to be a major chili beer. I hadn't tried one before so I was really going crazy to do so for the first time. The chili essence here is extremely light. It does give a distinct flavor to the brew, but it's still pretty light. I'm used to eating extremely hot foods so maybe I've spoiled myself with expectations. The taste is good enough, and it's certainly interesting with the chocolate and chilies together. Still, I was looking forward to more of a less chocolatey and more chili pronounced spiciness.

Very frothy and creamy. Afterwards there's a bit of mild but tingling chili pepper spice at the throat, but for someone like me who's used to it, it's really hard to notice. For all I know someone else's throat could be on fire, but with the overwhelming chocolate, I doubt it. And even then, the cinnamon may perhaps be helping it out which means less chili than chili. It's a Chocolate Bock with some Chili added. Not a Chocolate Chili Bock.

Well, I like it. It just didn't meet my expectations. It's actually pretty good, though it starts to get a little watery as you finish it off. All of the chili flavor is aftertaste, and I don't really mind it that much since it's gone down. But for me, it should have been more up-front! That's all.

I felt the same way about this one. Chili "kick" was too light. I wanted some more heat on the finish. If you ever have the fortune of coming across Sierra Nevada's Hellraiser chocolate chili imperial stout (http://beeradvocate.com/beer/profile/140/56341), I think it's more in line with what you were expecting. Hellraiser is by far the best chili beer I've ever tasted.

No, but now I desperately want to try it. Only brewed once, and on tap? That's insanity. These guys gotta step it up and put out a one shot wide array of these in bottles so I can stock up.

Weyerbacher just did something this month with an extremely rare one off called Idiot's Drool. The only way to purchase it was at the brewery, at a certain time, everything was super limited, the state only allows them to sell a case of 12 bombers at a time (so you have to buy a case - though you can mix and match I guess), and a bottle of the stuff was 23$ each.

Crazy! I've found that the best way to try the super limited brews, if you can't get to the brewery, is to attend brewery takeover events at craft beer bars. Sierra Nevada did a 30th anniversary night at Rattle 'N Hum in NYC with 40 taps and 4 casks of Sierra beers. The place was packed to the degree that if there was a fire, I'm pretty sure I would have been a dead man. Needless to say, that's when I tried Hellraiser. We can only hope they brew it again and bottle it.

As a special addition to top of my pumpkin brew series last month, I was going to go to this party in Cambridge: A Pumpkin Brew Halloween event by CBC with a $10 admission and take home special pint glass from the event. They had all these pumpkin brews from all over the world on tap and man, I haven't wanted to go anywhere recently, but I was dead set on going. Then the fuckin' snow storm hit just the time I was getting ready to go and knocked out my power for three and a half days! Total bullshit.

As for limited brews, I'll keep looking around for bars that have these. Looking but not finding most likely. But even so, I'd really have to want to go... as I hate driving now since I moved here.

I hear you, man. Most of the big events by me are in Manhattan, which is close to me by proximity but takes forever to get there. I wind up not going to most of them, because it's just too much of a hassle. That and the price of beer at most of the bars are insane. The event has to be really special, or for a brewery that I really love.