I was actually pretty pleased with how this one turned out (Female Vampire Skull, late 2009). Make that more than pleased. I don't like to toot my own horn but quite frankly I'd say it's badass! Especially for such a simple design. Like many of the pencil abortions from my mind, this one was just completely random. Sharp downturned cheekbones just suddenly sprang to mind, gave it sinister female eyebrows and vampire teeth for no other reason than I dig that shit. 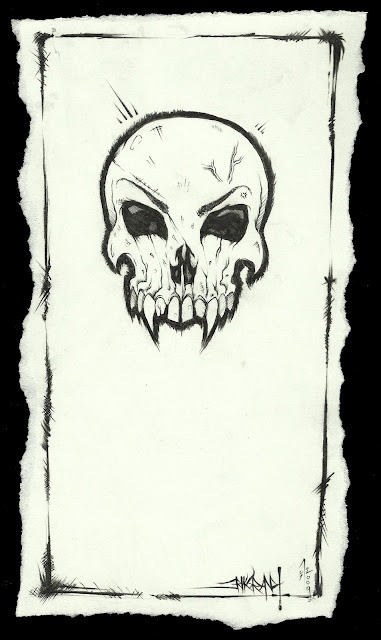 Plus a diagonal scar running down the face for extra character. Bordered it off for framing. Meh. Co-worker of mine says he'd love to get it as a tat, but he's too chickenshit. Every time I see the fucker I ask him where his tattoo is... I've got none but I'm thinking I may just beat him to it if I ever go completely f'n nutz.
Laid to Unrest by DrunkethWizerd

Email ThisBlogThis!Share to TwitterShare to FacebookShare to Pinterest
What the... Artwork, Horror, Skulls, Vampires

You're a fantastic artist!