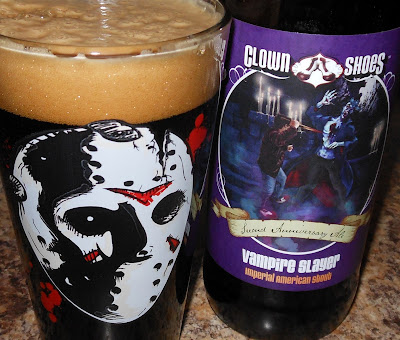 Thoughts: I christened my new Jason Voorhees Pint Glass with Vampire Slayer, a deep dark stout made with... holy water?! Vampire Slayer poured a near black with a hard to distinguish dark brown or burgundy during. The one-finger milk chocolate head started to fade and left a black crescent moon in the corner of the glass.

The smell is sweet, malty, and sugary. There's a toasty hint, kind of woodsy and there's a nice level of smokey chocolate. It basically smells like a heavily alcoholic ice cold chocolate milk.

Well, let's sink our teeth into this one. Hopefully my insides don't liquify and my body turns to dust! Taste is of roasted malts up front, as they diminish there's a high tinge of alcohol that buzzes around... then a very low level of grassy hop, and after that, almonds. That's probably the hickory. I already like this a hell of a lot better than their First Anniversary Ale. The dusty grass of the hops are so incredibly low and just let the malt bomb go free. The smokiness is what really gives this stout a little bit more of something special.

Mouth feel is a medium with a bit of froth that leaves a clean swallow with no residue.

I like this stout as it doesn't taste at all like coffee, but the chocolate isn't a huge overwhelming factor. This is a mellow beer for a 10% ABV, but it is so incredibly sweet and enjoyable. I guess the main thing is that I enjoyed it and feel good about the purchase. And with that, it's time to move on.

Email ThisBlogThis!Share to TwitterShare to FacebookShare to Pinterest
What the... Clown Shoes, Imperial Stout, Massachusetts Beer

Great glass. Perhaps it's time to smash one of the many beer glasses I've stolen over the years to make room for a Jason glass. On second thought, that would mean paying for a glass and I just can't bring myself to do that.

I'm not about to risk getting caught stealing a pint glass from Newbury Comics of all places (like they could keep me there if they stopped me)... now, bars and restaurants, that's another story!

I actually remember the last time I was accused of stealing something. It was from a record store back home, about fifteen years ago. I wasn't actually stealing anything, but my friend was, and I got confronted by the manager of the store. And I must have scared the fuckin' shit out of the guy with the way I reacted and let the whole mall know with my loudness and insane speak. Haha.

All of my stolen glassware is from bars and restaurants. I'd never steal a glass from a store. I've also got a bunch of free glasses from the beer store I haunt. I think the only glass I actually bought was from Dogfish when I visited the brewery. But then I wound up with a much nicer DFH glass from a bar in NYC. Go figure.