Maybe there's a god above, but all I've ever learned from love... is how to shoot somebody who outdrew ya.

Bio: (Note that  all [SIC]) "Silene is a beautiful warrior of the demon tribe. She was terrified by other demons as a formidable, cold-hearted warrior with an extraordinary psychic power. Silene with her good servants, Ghelmer and Agwel, attacks Akira Fudou to perish Amon the hero, that is, Devilman. The antenna on her forehead call lightning, clouds, and smash up her enemy with a thunder attack. Her gigantic wing on her head call deadly storm. With the pride of demon tribe, Silene keeps challengig to Devilman who has intelligence of human and demon's invincible body." 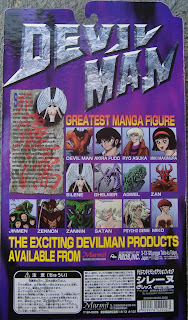 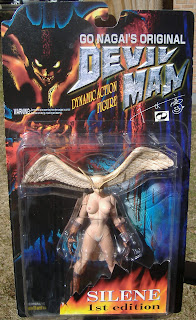 I've probably got five or six Siren figures by now. She was and has always been my favorite character from the Devilman series (can you guess why!? ;)) , and you can read about my thoughts HERE. This figure is made by the Marmit company and is perhaps one of the only from that series I own. When I got into Devilman early on I was heavy into collecting the works of Yasushi Nirasawa, which he did many for the Fewture company. Often times for the US releases they would do a "special" breast covered (by feathers or fur - additional molding) version. There were also, with many of these figures from each company, different painted versions, clear versions, and so on.

I bought the "First Edition" of this Silene figure because it's her colors here which I appreciate the most. Not that I don't mind the purple and blue old-school covered-up Manga version, but the Anime is what originally drew me in and I like the nudity, white and yellow (not that there's much yellow here, more browns). I didn't really have a special reason for not opening this figure other than when I got it I didn't have the display space. Also, I had my other Siren figures hanging about and just decided not to. Many of the Devilman figures from Japan aren't very articulated (as you'll come to notice when I post more of my collection), with the exception of Microman versions [which happen to be about two inches tall but feature for the least part, around 30 points of movement]. Devilman figures for the most part, from Vinyl figures to Action figures, have mostly really been Statue figures. I'm hoping for a revival with new toy technology, but it doesn't seem to be in the books.

That is a really sweet figure of her!

I love how absolutely ruthless she was in the anime.